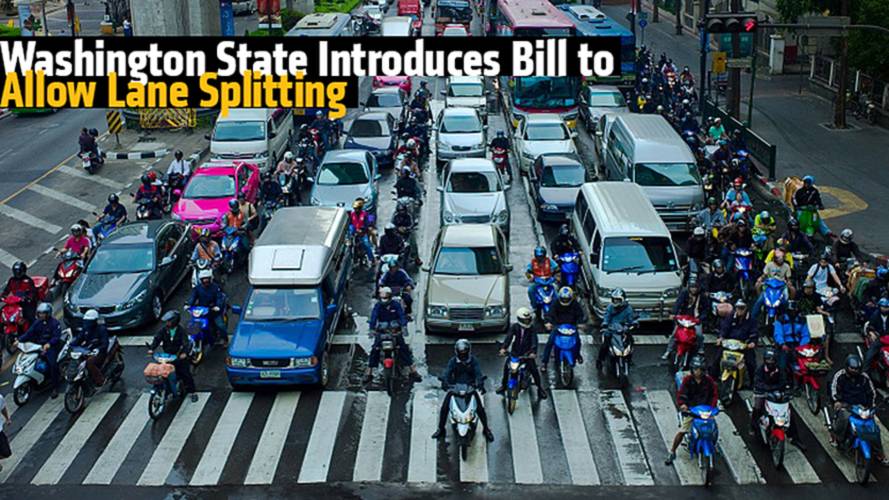 Will Washington be the next state to allow lane splitting for moto-riders?

Depending on who you ask, we California riders have it good: We're allowed to split lanes. Being able to do so makes California unique among all 50 states. While lane splitting here is technically legal, it's still very controversial— even California riders can't seem to agree on how, or even if, it should be done. Now another state, Washington, is considering adding a law that would legalize lane splitting (sorta—we'll get to that after the jump, so read on and get your comments ready.)

On Tuesday, February 3rd, Washington lawmakers discussed a lane splitting bill introduced by state senator Tim Sheldon. If passed, the law would allow riders to split lanes, but only under certain conditions.

Here's where things get a bit dodgy (pardon the pun). The proposed law would only allow riders to "occasionally" split lanes in traffic jams, where the general flow of traffic is 25 mph or less. Riders wouldn't be allowed to go over 35 mph.

Is this bill a good idea? What might give both riders and police a fit is the nebulous aspect of it. Legal lane splitting in this case would be predicated upon "traffic jam" conditions. Now, traffic jams are like jazz—hard to describe, but you know it when you hear it. Would a rider be within his or her rights to split lanes in stop-and-go traffic in order to avoid colliding with rapidly decelerating cars? If traffic is dense and the flow is 30 mph, would the rider be pulled over for splitting lanes at 40 mph? Still, the point can be made that allowing riders to split lanes under certain conditions is better than not allowing it at all, and may result in fewer rider-involved accidents.

Opponents of the bill (which include, not surprisingly, state law enforcement officials) will certainly have two major counterarguments—Washington's weather and Seattle's notoriously bad traffic. Washington does get a lot of rain, averaging 38.5 inches a year, according to U.S. government data. The problem facing riders is how the statewide rainfall is distributed. On the northwest coast, where Seattle and Tacoma are located, precipitation is considerably heavier than the amount the central and eastern parts of the state get (it's not uncommon for Seattle to get 40+ inches of rain in a year.)

Those who don't quite understand why lane splitting is actually a means to keep riders safer will certainly argue that there are waaaaaay too many cars on Washington's highways for riders to be sliding in between them. Seattle's traffic alone is terrible: One study says that it's the fourth-worst in the nation.

Along with allowing lane splitting under certain conditions, the proposed law would also make it illegal for drivers to intentionally get in the way of riders who are attempting to filter through slow traffic. The bill has a ways to go. It still needs to go before the full Washington Senate for a vote. What may bode well for the bill is that it's a bipartisan effort—decreasing the chances of it failing due to party line differences. And as we know, Washington lawmakers aren't opposed to legalizing stuff that your parents and the cops don't approve of.