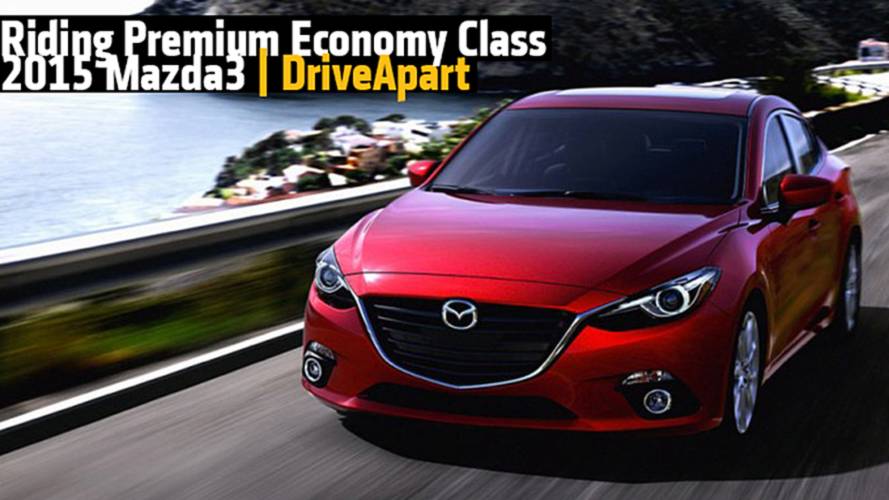 Why buy a base and basic Mercedes-Benz CLA when you can get a fully loaded 2015 Mazda3 instead? This is the premium economy class car we all want.

Now in its third generation, the Mazda3 continues to redefine what a compact car can be. It manages the rare trick of wrapping a fun, engaging driving experience in a value-minded package. While not a volume seller like, say, a Corolla, the Mazda3 is an incredibly important car for Mazda, comprising over 54 percent of the brand’s overall sales.

To attract new buyers, Mazda needs to keep upping its game. While enthusiasts love the MazdaSpeed3, it’s a little too hardcore for the mass market. Rock hard, turbocharged rides just don’t sell in high volumes. But everyone loves a cushy ride, so Mazda has moved the Mazda3 upmarket.

That’s not to say the Mazda3 is no longer cheap and cheerful—the base-model car still starts at just $16,945. But like a Porsche, you can option the hell out of one, as proven by my current tester, a Mazda3 S Grand Touring. It’s loaded with everything from heated leather seats to a motorized heads-up display, and it’s got the price tag to match—$29,685. That’s Mercedes-Benz CLA money.

With the CLA, you’re paying for that three-pointed star. Inside—especially in the base model—it’s sparsely equipped and filled with hard plastics and unfashionable vinyl seating surfaces. The Mazda3 backs up its price tag with high-end features like adaptive lighting, a power-regenerating braking system (to maximize efficiency in the electrical components), active grille shutters, radar-guided cruise control and more.

What’s really cool is that the Mazda3’s cabin has been designed for the driver. The front seats offer plenty of comfort and lateral support, the steering wheel is nice to hold, and the gauge binnacle is one giant tachometer with a few ancillary features. Oh, and that motorized heads-up display makes you feel like Maverick from Top Gun.

Further enhancing that “zoom-zoom” flavor are steering-wheel mounted paddle shifters, but what Mazda does right— and it seems they’re the only one to do so—is they give the gear-selector lever the proper manual shift configuration. Like a real racecar, it’s pull back to shift up; push forward to shift down. That right there helps make the Mazda3 the best compact in its class, but we have a word count to fill, so let’s keep going.

Visually, the Mazda3 is a car that’s incredibly striking from some angles and awkward from others. It’s got a nice, long sculpted hood, and it’s an excellent interpretation of Mazda’s new KODO design language. In the sedan, however, the lines abruptly end in the rear, leaving the back feeling unfinished. Maybe it’s just my test car’s color—which at my old job was referred to as “doo doo brown”—but it has an overall appearance that makes one go from “this car is awesome!” to “meh” in about half a second. And it’s apparently not so loved within Mazda itself – I can’t even find press images for it on the official Mazda media site. The 5-door version looks better, and I expect that the inevitable MazdaSpeed3 will have some sort of rear-end treatment to help resolve the overall design.

Where the Mazda3 really excels though is the drive. Powering it all is a 2.5-liter SKYACTIV-G unit rated at 184 horsepower and 185 lb-ft of torque. It’s a buzzy engine—don’t expect CLA levels of refinement—but when mated to its 6-speed auto, does a competent job of getting this compact four-door moving. Handling, as expected, is a ton of fun. The electric-assist steering provides a good amount of feedback, which adds to the fun of tossing this car through corners. It’s a car best experienced in 2nd or 3rd gear, flung down a tight, twisty road. And when the drive becomes boring, just throw it in “D” and finish up your commute with up to 32 mpg combined.

This Mazda3 S Grand Touring is premium economy done right. It’s a right-sized package loaded with convenience, and unlike its competition, is genuinely engaging to drive. Yeah, its looks could use some help (my latent tuner tendencies would like to see this wearing a racecar stance and aero), and it lacks the brand cachet found in other $30k rides, but it’s a ride that can change one’s preconceptions of the compact car. That said, for just a bit more cash, one could buy a similarly equipped—and more “grown up”—Sonata or Optima.

If you’re set on a compact, get the Mazda3 – just skip on some of the options and save some cash. Or, you could do the smart thing and hang tight for the inevitable MazdaSpeed3.

READ MORE: A Crossover that Acts Like a Sportscar: 2015 Mazda CX-5 Review