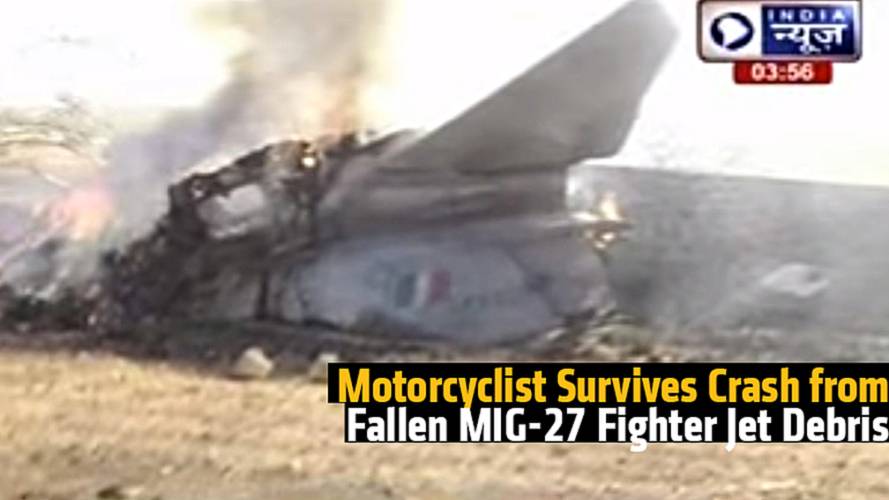 Motorcyclist Survives Crash from Fallen MIG-27 Fighter Jet DebrisBikers are more at risk than their four-wheeler-cocooned counterparts for dozens of...

Bikers are more at risk than their four-wheeler-cocooned counterparts for dozens of reasons. Being exposed to the elements is one of them. Rain, hailstones, snow, pedestrians, bicyclists, and that odd deer that is so much in love with you that it will cross the road right when it sees you riding by...

You may have thought that’s one of those unexpected “elements” which you may get introduced to once in a while. But a fighter jet? That’s an all new league of strange things to crash into while on a motorcycle.

When 26-year old Loon Singh headed out on his motorcycle to deliver a couple of wedding invitations on one of his rather usual days in Rajasthan, India, seldom did he expect something to crash into him. An ox, a camel, a cart or that elaborately decorated lorry which rumbles along the highways were the ones he may have been worried about.

But he was in for a shock when an Indian Air Force MiG-27 jet fighter fell from the skies and crashed beside him. As the plane crashed, pieces of debris were flung all over the place and one of the pieces hit Singh and his motorcycle. Act of God or whatever we may deem it right to call, he survived this unusual road accident with minor burns and a fractured hand. But the same can’t be said about his steed, which was reduced to a heap of charred metal.

In case, you're wondering about the pilot, he survived the horrific crash by ejecting at the right time.

So next time when you head out, do keep an eye on the sky as well. Eyes on the road may not just be enough these days.

READ MORE:  Old but Gold: Watch This Idiot Over Rev His Bike 'Til It Catches Fire - RideApart