Triumph is Now the Best-Selling European Brand in North America 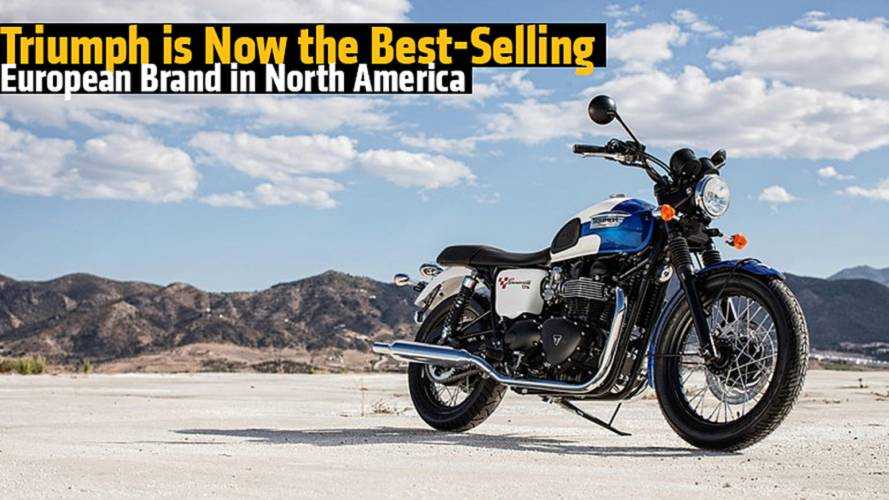 Triumph has a big January. Will their success in North America last?

Pretty much everyone I know hates January. It’s not a month—it’s a 30-day figurative (and yeah, possibly literal) hangover from not only the cumulative effects of December, but also from the entire previous year. Among the few who don’t hate January are the folks at Triumph. Turns out, last month was REALLY good to them.

Triumph’s January sales were up over 66 percent in January compared to the same period at the beginning of 2014. This alone would certainly have made upper management happy. What probably made them ecstatic was a 379 percent growth in Canadian sales over this period (No, I didn't forget a decimal point.)

According to Matt Sheahan, COO of Triumph Motorcycles America, the brand achieved a combined 82 percent increase in year-over-year sales. This puts them in first place among European motorcycle brands in the North American market.

This news is the icing on the cake for Triumph; 2014 was a great year for the brand. The company sold just over 54,000 bikes last year, its highest number since 1984. Moving away from their oft-perceived image as a builder of retro-styled bikes probably helped. While the Bonnies still remain their best-known (and among certain crowds, best-loved) bikes, Triumph sportbikes and ADV models gave the brand a foothold in those sectors. And it appears that Triumph is going to continue to push on three fronts and isn’t skimping on advertising costs—a recent print and video ad campaign for the Tiger 800 XC features TV badass Bear Grylls doing Bear Grylls-like stuff on the Tiger.

What's interesting is that unlike many of its competitors, Triumph is not looking to crack into the growing new rider segment any time soon. As far back as 2013, the brand had been hinting at developing a 250cc bike that would presumably be aimed at the Indian and Asian markets, and marketed as an entry-level bike in Europe and the U.S. But in September of last year, those plans were put on hold.

This is what the Triumph noobs won't get to ride: a spy shot of the so-called "Street Single", from 2013. (Photo: Chris Doane Automotive LLC)

Whether or not Triumph enters the small bike ring remains to be seen. With numbers like the ones they've been posting, Triumph's leadership may believe that sticking with what's been working for them over the past few years might be best. It'll be a challenge for Triumph to stay on top if this is the case; however, one key to capturing the global market is producing a broad range of bikes for a wide variety of riders, as well as the environments that they ride in. (A Triumph Rocket would probably not fare so well on the streets of Delhi or Rio.)

Triumph's chief competitor, BMW, seems to be aware of this as evidenced by our recent piece about their new small-displacement bike. What also remains to be seen is how long Triumph's ascension to the top will last.