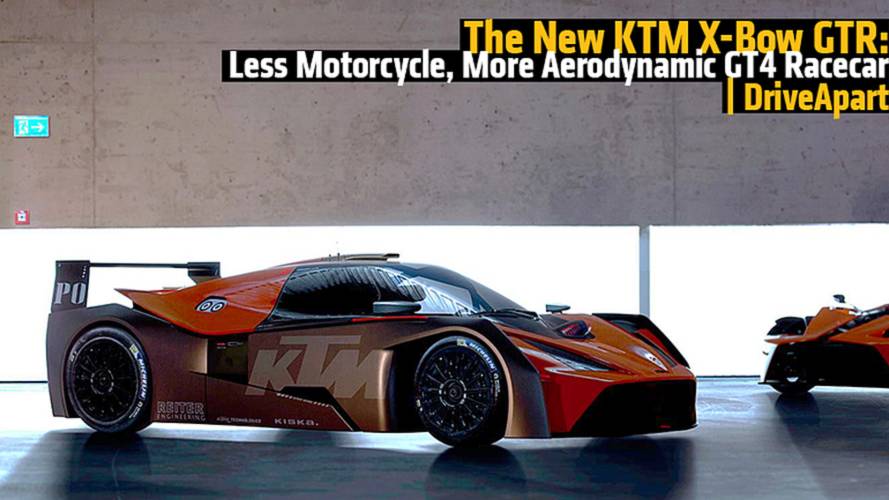 The KTM X-Bow GTR race car is the GT4 contender moto-heads will love.

When KTM decided to enter the world of cars, many were skeptical as to how the experiment would turn out. We've since found out they knew what they were doing creating the open-top, open-wheeled race car/sports car hybrid that's been center stage in many of our late-night dreams. Yes, it has two door panels and four wheels, but often times drivers have been forced to wear helmets on the road.

Preserving the wild nature, which is the inherent trait of its motorbike range, KTM succeeded in making a no-frills-all-purpose track car that is road legal. The X-Bow doesn’t disappoint at all when it comes to delivering track day thrills, but now KTM has introduced a upgraded version that's far less motorcycle and far more DP race car—featuring full fenders, body panels and all kind of aerodynamic goodies. Enter the KTM X-Bow GTR.

As opposed to the standard procedure of converting a road-legal car to a race car version, which involves throwing out everything from license plates to body panels, KTM had to take the opposite route for the GTR build. Since the road-going X-Bow is essentially an engine with a seat and wheels bolted on to it, the builders had to add lots of bodywork to transform it into a GT4 contender.

Developed jointly by KTM and Reiter Engineering, the GTR will be making its first racing appearance this spring when it’ll be facing off against the likes of the BMW M3, Nissan 370Z, Lotus Evora and Aston V8 Vantage.

READ MORE:  7 Reasons Why I Love and Hate the McLaren 650S Spider - RideApart

With a VW 2.0L turbo four unit powering the rear wheels, the X-Bow GTR is rumoured to have a power output in the range of 350-400bhp. KTM intends to make the car available to racers at around 139,000 Euros.

Just like the standard X-Bow that has seen legal issues with things like helmet laws and registration, the major bummer about this KTM is it isn't street legal… at least not yet.

If KTM can make a spartan machine like the original X-Bow pass off as a road car, the GTR with better-fitting body panels can certainly make the cut and in the process make it to the driveways of those who can afford to buy one.