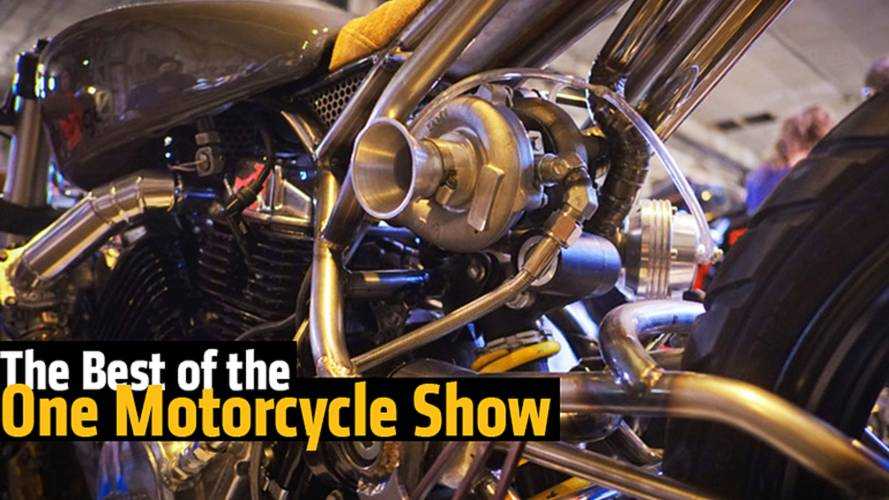 We attended The One Motorcycle Show in Portland and left struck with the custom-bike bug. Check out our top picks from the show.

Whether it's a bike built in a shed, a garage, a living room or done by a master builder that makes more profit on his t-shirts than bikes, you'll find them all under one roof at the One Motorcycle Show in Portland. Only in it's 6th year, the show has grown exponentially, pulling in builders and fans from all over the US.

We decided to take the long road to Portland from LA this year, mounting up on a brand new Honda CB1100 with camping gear on the back and the twisty roads in front. The only problem we had was deciding which was more fun: the ride or the show.

With a beer in hand, I waded through a sea of plaid, leather, steel and rubber with the option of purchasing cool show swag, a cup of fresh coffee from See See’s Motorcycles, or a slice of pizza from Roman Candles. All that aside, no matter where I walked I was greeted on all sides by beautiful works of art. There were motorcycles from different era’s and genre’s—some modernized, some restored, all unique and infused with touch of personal flair from their builders.

During my three days at the show, there were three motorcycles that I found myself walking past again and again. I was fortunate enough to take time to speak with each of the builders about these bikes. For the sake of space, I've included cliff notes below (stay tuned for the full character and bike profiles in the coming weeks).

The most impressive bike in the show—in my humble opinion—was a beautiful custom Honda VT500T with a turbocharger built by Dagos Toma of Strange Coast Moto.

Local Portland based builders Lance and Kyle, came together to put together and restore of a Yamaha RD400 bought on Belmont Avenue from an old man that was hesitant to sell. This bike was the result of one year of tinkering and rebuilding in order to bring it back to life.

The last of the three was a Honda CL450 Desert Sled totally tricked out by Jason Paul Michaels and Will Benedict of Dime City Cycles—with sheet metal work by Frankie Bowman. I particularly like this bike because not only does it look like something that you would want in the zombie apocalypse, but also because I've seen it romp around in the mud and it's every bit as practical as it is beautiful.

READ MORE:  6 Concept Motorcycles We Wish We Could Ride - RideApart