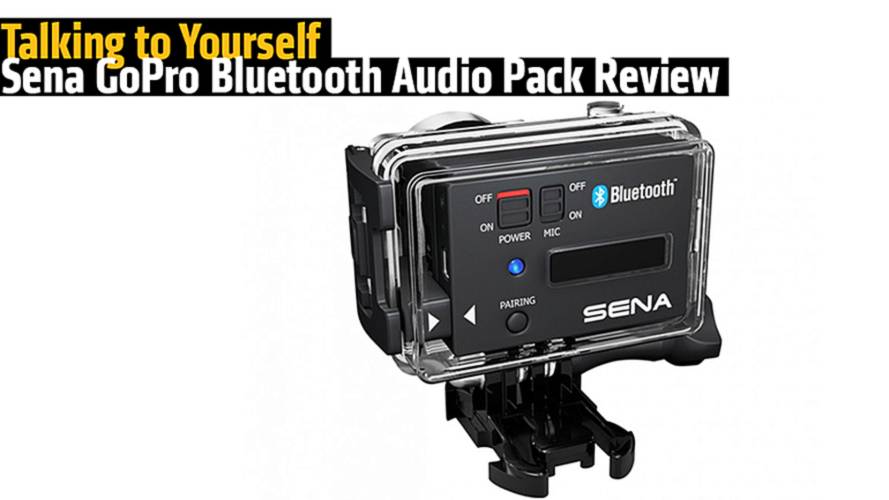 Easy voice over recording for your GoPro videos with the Sena Bluetooth Audio Pack.

Like to hear yourself talk? Need to create videos with voiceovers and descriptions while you're mobile? Want it to integrate with any headset? If you answered yes to these questions you're looking for the Sena Bluetooth Pack for GoPro.

V-loggers, video sharers, GoPro professionals and those looking to capture the moment on their ride can benefit from this simple to use audio accessory. It's far easier to capture your thoughts as they happen than it is to go back in editing and add voice over. Sometimes you catch more than you bargained for when it's a stream of consciousness rant in traffic or a big pothole.

Using Bluetooth 3.0 connectivity, it integrates with almost any Bluetooth headset or microphone to allow for wireless recording. It's an accessory add-on pack that attaches to the back of a GoPro 3+ or 4 camera (see the picture below).

READ MORE: Watch This 70-mph Failed Wheelie as Presented by The Police

There's a bridge connector where charging and controls can be done through the accessory pack without the need to disassemble every time you plug it in. It also charges both devices simultaneously, and once synced to your headset, it automatically reconnects when turned on.

When used with a Sena headset, you do get the ability to record in a higher definition format—power it up, hit record, and talk. You can also record conversations between headsets, which is neat if you're doing a Podcast or other show where you have two people talking.

READ MORE: Attention MotoAmerica: This is How Points Should be Awarded

Here's a video that I shot in order to do some testing. I'm not a V-Logger or even a talkative person, so it's not the best overall film. It does, however, show how the audio pack works—you can see the clarity and its seamless integration.

The video has nothing to do with the audio pack, and it's mostly a rant about MotoAmerica, racing and some NASCAR moments.

If you need or want to record audio with your video wirelessly, seamlessly, and with minimal setup and fuss, this is your device. If you prefer things that are not compatible, don't always work, and cost too much then look somewhere else.

Priced at $84.99 via Motorcycle Superstore, it's a low cost addition to your already versatile GoPro (I've paid more for mounts for the GoPro.) For my money, I would step it up a little and get the audio pack housing as well. It's an extra $35.99, but you would now have a waterproof housing that fits the camera and the audio pack.

READ MORE: Made by a Woman for Women Riders – MotoChic Gear