Old but Gold: Watch This Idiot Over Rev His Bike 'Til It Catches Fire 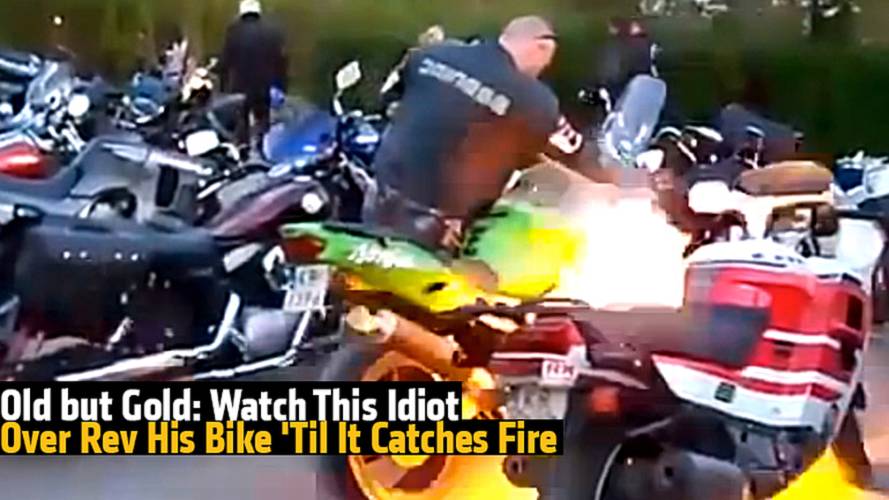 Watch this rider basically set fire to his own bike. There's nothing like a video from the past to remind us why we shouldn't do stupid things.

It’s sad that in the 21st century there would be the need for the Darwin Award—an award often given posthumously to a person who died while committing an act of almost immeasurable stupidity. I say almost because the givers of the Darwin Award can measure such stupidity and award it as such. This video, which has been circulating around the Internet for some time now, is a good reminder that stupidity knows no bounds, and what can happen when one over-revs one’s bike (read: fire).

This man could have easily became a punch line in a long list of jokes.

You can almost listen to the engine beginning to give, succumbing to the man’s idiocy. With no airflow, an engine can get hot, hot, hot. With a possible compromised fuel or oil line (likely melted from the red-hot engine), these liquids could have easily leaked through, dumping onto the headers and going up in flames.

Given the fact the video cuts out shortly after the flames fly, we can only assume no other bikes were harmed in the making of the video—or at least, we hope. What we can say was damaged was the man’s ego. We bet he never did that again.

READ MORE: Watch This SnowMobile Ride Across Water With Fire Balls in Tow