What People Think When You Drive the McLaren 650S Spider and Why You Shouldn't Care! - GuzControl 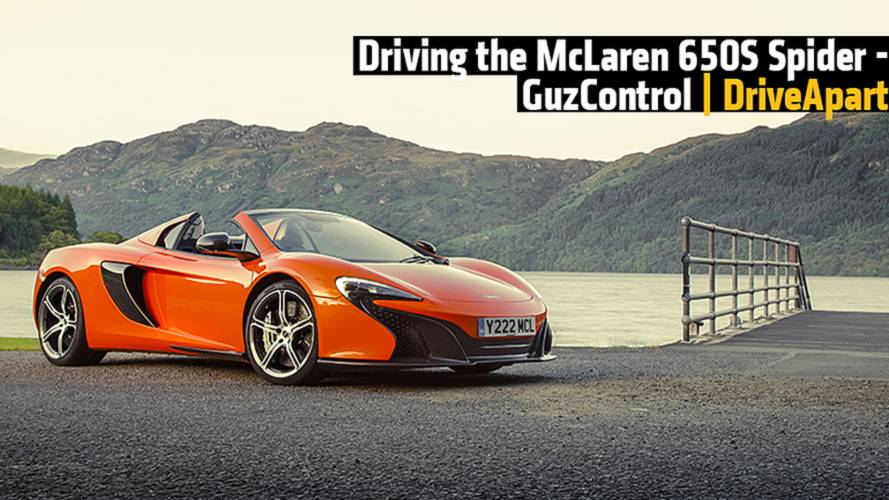 Power. Speed. Handling. Beauty. DriveApart reviews the new McLaren 650S and you'll be just as impressed with it as we were.

Subtle? It is not. Looking for something quiet? This, my friend, is not the car for you. You want subdued? Drive something else. The McLaren 650S, especially in its traditional orange livery color, is a supercar filled with such excess and prowess that the vehicle transcends the boundaries of taste and decorum and transmogrifies into something else, something way, way more stupefying. In fact, the McLaren 650S it's one of the nuttiest, most insane cars I've ever had the chance to drive.

The McLaren is powered by a twin-turbo 3.8-liter V-8 engine that produces a whopping 641 hp and 500 lb-ft torque—and for ease, comfort and faster driving times and is equipped with an F1-inspired 7- speed Seamless Shift (SSG) dual clutch gearbox. Gone are the days of the foot clutch - and I say good riddance.

Say what you will, but track times are often faster with this gearbox compared to a traditional stick and, may I add, I think I’m too self-absorbed to row through gears on the street—what with phones, ipods and coffees to hold. It's a gentleman's car, and gentlemen just don't have the time to be bothered with things like a shift knob.

But all that speed and power has nothing on the way the McLaren 650S Spyder looks. Imagine a taut and surprisingly small body that is shrink wrapped around a carbon fiber monocell. The 650S, naturally, is a convertible and has an electronically operated roof that opens with one touch (leave it alone...see it, but I can't believe it...it's going back on it's own!)

Also, those doors—those doors!—that open upwards to the sky, giving the feeling of sitting inside a 650S, on a bright and sunny day, against the backdrop of a blue sky, watching the clouds rolls by—it's like being inside a James Turell...if a Turell could hit 200-plus in a flash.

So, how does it drive?  I can throw around expressions like, “a pure driver's car,” or “an exuberant lesson in the power of pure dynamics and power,” or “a master class in what a supercar should be—perfectly balanced, fast as hell and made for wide open mountain roads and track days galore.”

All true, but that’s not the point. The McLaren 650S, with the exception of the Porsche 918 at almost three times the price, is the best car I have ever driven, hands down.

On two of the best roads in Southern California - Piuma and Stunt Canyon Roads - in Malibu, I had more fun than 36 barrels of monkeys. I bombed up and down the windy ribbons of asphalt with not a care in the world and drove up and down and up and down both canyons until I—literally—ran out of gas. I coasted down into the valley on fumes with a giant grin—my face was sunburned and was also dripping sweat from the hot, hot Los Angeles heat. In other words, a perfect day and a perfect drive.

Just to mention the drive a little more: At speed, through the canyon, I mashed the brake pedal and whoa... the 650S deployed its massive - and I mean massive - rear spoiler which blocked the entire rear view of the car, it all was a blur of orange and carbon fiber.

McLaren calls this their Active Airbrake system and automatically deploys the spoiler at a 32-degree angle when the 650S’s sensors detect the car needs some extra downforce or, in my case, under some serious heavy braking.

Oh, Those Looks: What People Think of You!

But what about owning the car, you may ask?  Driving a $300,000+ super car around Los Angeles can elicit quite a few emotions from the general, non-car loving public:

1. Both looking at and away from you in disbelief. This happened in the Rolls Royce Wraith I drove a few months back. While the car was beautiful to behold, tooling around town in a car made for a Playboy Oligarch wasn’t my idea of a great time. I felt mocked, shunned and fantastic all at the same time. Feelings from my past dating life also sprung up, but I guess some people pay good money for those emotions in other situations, but in a car? It's not really for me. But, to quote the Pope, who am I to judge?

2. What is that and why is it so expensive?  This happened with the Aston Martin Rapide S, another 300K+ car I recently drove. People would stop and ask me what I was driving and how much was the car. They would inevitably blanch when I told them the price and they still didn’t know what an Aston Martin was.

With the McLaren, there were no confusing queries, aside from the occasional, “Did Mercedes make that?”—a throwback from the days when the two companies produced F1 teams and cars Paris Hilton would drive together.

READ MORE: 7 Reasons Why I Love and Hate the McLaren 650S Spider

Oh McLaren, your 650S is the thinking man’s supercar. While you could get a Ferrari 458 or a Lamborghini Huracan for somewhere around the same money, those cars look gauche compared to the sleek futuristic lines of the 650s.

The 650S looks and drives like nothing else, is as exclusive and limited as a pair of Adidas Yeezy Boost, and—unlike other cars— when you’re stuck in rush hour traffic, there is always someone in the car next to you taking your picture for Instagram. Remember to say "cheese!"