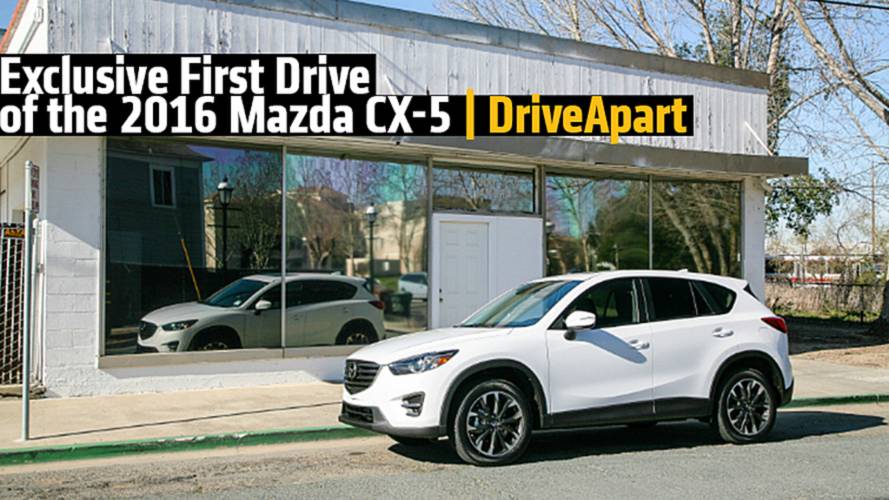 New Tech and More Elegance From a Mid-Cycle Refresh

As the adage goes: You can never have too much of a good thing. In the case of the updated 2016 Mazda CX-5, its mid-cycle refresh brings more elegance and greater technology to an already stellar crossover.

It’s no secret that the CX-5 has been winning comparison tests and topping sales charts since its debut in 2013. What’s not to like? It has a 5-star safety rating, class-leading fuel economy as high as 35-mpg highway, handles far better than anything with its utility has any right to, and it even swallows a small family with ease.

But the compact crossover class is a ruthless sandbox to play in, as the competition sees constant model refreshes and clean-sheet designs aimed at topping the heap every few years. Despite its popularity, it didn’t come as a surprise when Mazda debuted the updated 2016 model at the LA Autoshow this past November.

According to the release, “for the 2016 model year, CX-5 adds new levels of refinement and brings a depth and maturity to a variety of areas, including design, the quality and functionality of the interior, ride comfort and quietness, as well as safety performance.”

In other words, the updated CX-5 brings a quieter, plusher cockpit augmented by equally classy exterior upgrades and new technology throughout.

It’s what’s on the inside that counts

Updated front and rear seats with deeper rear seat bottoms are said to add more comfort, and for those that don’t like black with subtle red stitching, there’s a new Parchment leather option (an off white) that replaces the 2015’s beige leather option. Speaking of comfort, there’s also a reshaped center armrest that might appear unorthodox, but it’s more comfortable than the 2015 unit thanks to a narrow arm that extends farther forward for support.

On the notion of comfort, the outgoing TomTom Nav unit in the 2015 CX-5s was anything but comfortable, as it was the one glaring gripe in an otherwise flawless package. Thankfully, Mazda updated the 2016 with the stellar MAZDA CONNECT interface from the Mazda3 that brings a larger 7-inch touch screen, up from the outgoing 5.8-inch unit, along with console mounted dial controls that make the interface between man and machine immensely more transparent. As one would expect, the new interface comes with a back-up camera, Bluetooth connectivity and can be had with an available Bose stereo.

Just below the new Nav unit you’ll find an upgraded center dash design with revised HVAC controls along with a new center console design and augmented with another new feature—an electronic parking brake that not only saves space, but also adds to the upscale ambiance. Other noteworthy upgrades include a new console-mounted Sport button that is said to heighten throttle response and command aggressive transmission programming.

The instrument cluster is also revised with an updated display center and accent trims available in different finishes. Mazda also moved away from the traditional orange backlight color for interior accents in favor of an off white.

Mazda also claims that cabin noise in the 2016 model is 10 percent quieter thanks to more sound insulation throughout—particularly around the front shock towers—along with thicker glass in the side windows.

But the exterior treatment is more than just some new shoes, as a new flat-bar grille and fog-light surrounds replaces the honeycomb versions on the 2015 model. New LED taillights join the party and Grand Touring models get new LED headlight lighting signatures along with adaptive LED headlights and compact LED foglights.

Our test vehicle came equipped with the LED lighting package that not only impressed us with its light intensity and throw, but the auto high-beam control—an option traditionally reserved for more expensive luxury vehicles—also allowed us to leave the high-beams on without fear of blinding oncoming drivers.

A new i-ACTIVSENSE package joins the party this year that brings with it the venerable Smart City Brake Support (SCBS) and Smart Brake Support (SBS) that stops the CX-5 at slow and mid speeds to avoid a frontal impact, an upgrade over the 2015 models that only had Smart City Brake Support. SBS works between 9 and 90 mph, while SCBS operates at speeds between 2.5 and 19 mph. It also includes Lane Departure Warning, Mazda Radar Cruise Control and Mazda’s Blind-Spot Monitoring , which was available on the previous model, but it’s now augmented with Mazda’s Rear Cross Traffic Alert.

In other words, it’s got class-leading active safety nannies that this editor begrudgingly accepted upon first drive, but quickly grew fond of during the daily commute.

Other noteworthy safety features include stability and traction control, ABS, a slew of airbags, and the honor of being among the few in its class to earn the IIHS Top Safety Plus (TSP+) award when equipped with the forward collision avoidance option.

Both Skyactiv motors, the base 2.0-liter with 155hp and 150 lb-ft and the optional 2.5-liter with 184hp and 185 lb-ft—as well as the manual 6-speed and available 6-speed automatic transmissions—remain unchanged, which is a good thing since both motors offer competitive performance and fuel economy. The manual transmission is still only available on the base trim with the smaller 2.0-liter motor, and the all-wheel drive is also still reserved for the larger 2.5-liter—just like the outgoing model.

If ever there was a crossover that was a capable as it is useful, the CX-5 would be it. It handles like a sportscar up to 8/10ths on a twisty road, yet hauls the family, pets and household items with ease. Sure, the Nissan Juke might handle a smidge better, but it’s interior space and carrying capacity is closer to that of a GTI rather than a compact crossover. And sure, the Honda CR-V might haul just a bit more cargo and ride a touch softer, but it’s also nowhere near as engaging as the Mazda is. You get the point—the Mazda strikes a solid balance between performance and practicality. We will note that some testers found the ride quality of the CX-5 on the stiff side, while others found it more "sporting," ultimately you'll have to be the judge.

But how does the 2016 compare to the outgoing model? For starters, while engine noise is still present under acceleration, and admittedly louder than some of the competition, wind noise and NVH from the shock towers is notably quieter now—making highway cruising much more pleasant. Is it 10 percent quieter like Mazda claims? We wouldn’t doubt it.

Life inside the cabin is much more upscale this year and the combination of the new MAZDA CONNECT interface with the center console mounted controls is significant better than the outgoing model. Gone are the days of dropped Bluetooth calls, erratic music playback and odd Nav behavior—instead the new interface is a well oiled machine that betters the driving experience by a large margin. Seriously, if this were the only upgrade for 2016, it would still be worth the wait. The new interface is that much better.

While all of the exterior details have certainly added to the Mazda’s elegance, the LED headlights and foglights with matching LED accent lights not only look the part, but they’re worth the price of admission for night driving. They’re tremendously bright, the adaptive controls allow them to turn with the steering wheel, and the high-beam control means you can focus on the road rather than blinding oncoming motorist. As for how they compare to the outgoing HID units on the Tech Package equipped CX-5s, while the throw of the light isn’t immensely further, the intensity of the patterns is notably stronger.

Performance from the 2.5-liter is on par with the 2015 model and the transmission is also of equal quality, but it's one that performs a bit better during spirited jaunts thanks to the selectable Sport mode that holds onto gears longer. While the 2.5-liter doesn't have the shove of the 2.0-liter Ecoboost equipped Ford Escape, it's still more than adequate under normal circumstances like merging onto the freeway or moving out to pass on a two-lane road.

The outgoing CX-5 was already a frontrunner in its class that traded some dated tech for a stellar chassis and a dynamic driving experience, but the 2016 updates fill in the gaps to put the Mazda back in the running. It’s the same fun-to-drive crossover it’s always been, only now it can lay claim to class-leading technology, safety, and comfort features as well.

The journey has just begun

As fate would have it, my fiancé and I were in the market for a compact crossover, and after we fell in love with the 2015 model we tested some months ago (https://www.rideapart.com/articles/2015-mazda-cx-5-drive-review), we decided to purchase our very own 2016 model. As such, we’ve decided to conduct a longterm review from the buying experience on up through the first year of ownership.

Being that we’re based in the Bay Area, a quick Yelp search revealed that Ken Harvey’s Mazda in Dublin was the place to go for a new or used Mazda not only because of their renowned customer service and large lot with several hundred new Mazdas in stock at any given time, but also because it’s owned and operated by a family of enthusiasts. Don’t believe me? Owner Taz Harvey competitively road races in many endurance and rally events, and he’s also an avid vintage road racer with his many Datsun 240z and 510 racecars. If that’s not diehard enough, the company also has a dealer-wide trackday every year at Thunderhill to let the entire staff experience the proper definition of Mazda’s Zoom-Zoom catchphrase.

Call me old fashion, but I also enjoy the fact that Ken Harvey’s Mazda is still family owned and operated. Stay tuned for the full story on this unique dealer and our wonderful buying experience in the first longterm update. We will add, however, that it was great to hear of the company’s humble beginnings as a Honda motorcycle dealer in the 60s up through the company’s current world-class facilities and staff.

Before we leave you, we had to include a photo my fiancé and I accompanied by Fleet and Internet Sales Manager Garth Wall who exemplified the term "customer service" from start to finish during the purchase process.

Stay tuned for monthly updates as we continue to test the newly updated 2016 Mazda CX-5.