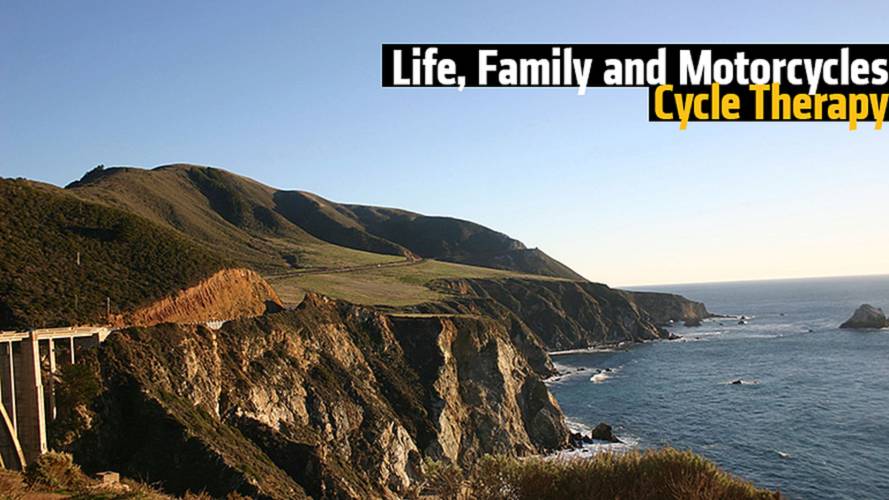 Matt takes a life long awaited trip with his dad up Hwy 1 on a couple rental Harleys for some Cycle Therapy.

READ MORE:  The Risks of Not Riding a Motorcycle | RideApart

I’d be standing behind the bike, playing in the warmth of the exhaust and asking him to throttle the engine again. He’d pull the clutch and stomp the shifter into first with a loud, abrupt clunk. The rumble of the engine would deepen as he’d engage the gear, lift his feet to the pegs and take off down the street—the bike getting louder as he’d accelerate, shift, accelerate and shift, until he was so far away that the sound was gone. Silence as I’d sit on the curb and wait, listening for the distinctive rasp of his motorcycle off in the distance indicating his return.

When he did finally come back there was always something different about him. His hair would be blown back, his face would be flushed and he’d have a grin he otherwise never wore.

He’d lift me up and put me on the seat in front of him. I’d stretch my toes to rest on the engine guards and grip the sides of the blue gas tank, and off we’d go—it was the late seventies, safety hadn’t been invented yet.

He rode that bike for the next few years, mostly on the weekends and after work on summer evenings until one day, while out for a ride, he hit a slick of oil and the bike slid out from beneath him.

That was the last time he rode the blue KZ 400.

He had been wearing a helmet and wasn’t going very fast, but he was lucky all the same. He decided that since he had small children he had no business being on a motorcycle.

Over time, the bike became a large yard ornament, with weeds growing between the spokes. The tires had deflated, the paint faded, and sprinklings of rust appeared like a dusting of cinnamon over the once mirrored chrome.

Eventually the bike was given away and while my father talked about getting another one someday, he never did. Instead, he went to motorcycle shows and collected pamphlets that would never come out of the bag into which they were collected. He’d watch bikes fly by with a bit of yearning, sometimes stopping in his tracks to take in the explosive boom of an obnoxiously loud Harley Davidson setting off car alarms in its path. And when I grew up and bought a motorcycle of my own, a vintage BMW, he didn’t do much more than tool it up and down the street once, and sat on it with envy—the same way I had sat on his KZ 400.

Motorcycles were the one thing my father and I bonded over—we both had the bug. So when I offered the idea of him riding his dream bike along the California coast for his 60th birthday, I was surprised when he paused.

It hadn’t occurred to me that it had been twenty-five years since the oil slick took him out on the KZ 400, and in that time while I had gotten bigger, stronger and more coordinated, he had become less. His reflexes had dulled and his balance wasn’t what it had been, but mostly (even though he kept renewing his motorcycle license over the years) he hadn’t actually ridden a bike since.

But the bug did eventually kick in, as it always does.

We flew into LAX from Chicago, took a cab from the airport to Route 66 motorcycle rentals on Lincoln Blvd., and from there it was like Easy Rider. We had to be in San Francisco in five days to catch a flight back to Chicago, but aside from that, time was irrelevant.

We began the trip slowly and with no map as we only had one road—Highway 1 North. We stopped when we needed fuel, food, or happened to see something worth seeing: a lighthouse, winery, or a cliff overlooking the ocean that made us realize we were standing on the edge of the country. Aside from the stops, it was nothing but sound—the rumbling of the engines bouncing off of the cliff walls and out to sea… CONTINUE READING

When I started riding a motorcycle, a friend of mine told me about something he called “cycle-therapy.” It was the idea that when you’re driving in a car it’s as if you’re watching the scenery pass by on a TV screen. You don’t feel the wind, and you don’t smell the air. You’re inside a temperature-controlled compartment listening to music. But when you’re on a motorcycle you’re part of the scenery. You’re not going past the world; you’re going through it. You’re suddenly keen to the smell of the air and the changing temperature of the wind, no matter how subtle, while listening to the sound of life whistling against the steady hum of the engine propelling you.

“…And what you do,” my friend told me, “is you take one thing: a thought; a question; a problem; and you imagine that it’s a ball of string. You take the end of the string and you tie it to your finger. Then, let the ball go as you ride away. By the time you get to the end of your ride the ball is unraveled and at the core is your answer.”

When he told me this, with deepest sincerity, I said: “bullshit.”

But as we rode I held one thought in my mind. It wasn’t a question, and it wasn’t a problem of which I needed a solution, it was a memory. It was the image of my father; windblown and grinning as he’d pull up on that old blue Kawasaki, smiling in that way he never did otherwise.

I can only assume that the proverbial string completely unraveled on day four of our trip somewhere outside of Carmel, because as we rode towards San Francisco on the last day of our ride a thought popped into my head out of the blue.

He had said it to me all those years ago, “ you ride a Harley for the sound.”

But now, I finally got it.

It was the sound of nothing that he looked forward to on those rides alone. It was a sound that was devoid of children, and pets, and television. There were no phones ringing and no wife to argue with. There was nothing else for him to be doing but watching the road and listening to a white noise. Listening to the absence of everything else in his life.

You ride a Harley for the sound.

READ MORE:  How to Find the Right Motorcycle Schooling | RideApart

I pulled up next to him for a moment and at that moment we shared a glance. And in that glance a torch had been passed because when I dropped back I caught a glimpse in the mirror of a grin. A grin - I swear - I otherwise never wore.