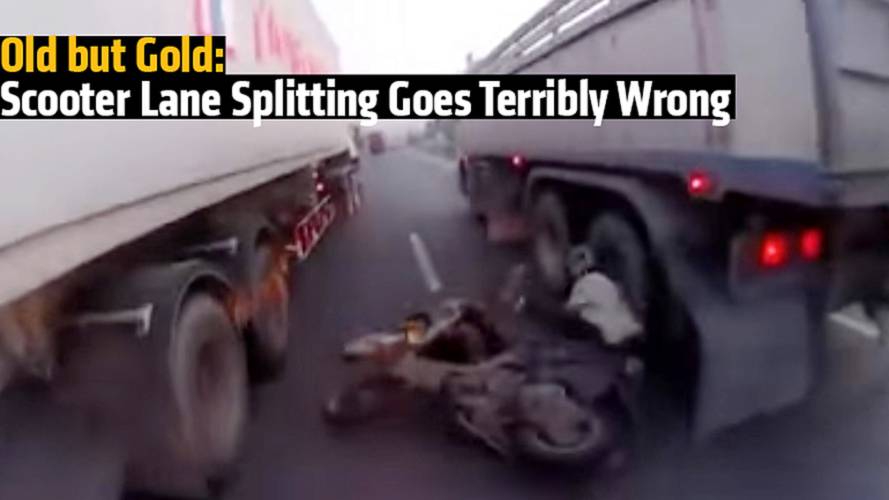 Don't be like this scooter lane splitter. Watch and see why lane splitting should be done with more finesse and vigilance.

Ugh. Just watch the video. The level of luck this guy has is astounding. I hope he went out and bought a crap ton of lottery tickets, because with luck like his, he’d win everything for like ever.

If he was just a bit more vigilant, he wouldn’t have ran into his friend like an idiot while trying to pass him—a daring and dumb double lane splitter. They both could have died, or been seriously injured. How he wasn’t ran over mystifies me. That was some Spock-level intelligence to roll away without becoming one dead human pancake.

When he goes down you can see his head spun around by the semi truck tire, mere inches from going under the tire. As the truck rolls by, he sits up just enough for another tire to miss him, yet, not too much to have his legs stretched out in front of him. At the end of the video, the guy even gets up smiling after, I'm pretty sure, having intercourse with death itself sans one shoe. That takes some very large cojones to laugh something like that off—or maybe a bit of stupidity.

We don’t know if he’s okay, he may have injured his leg, but for what could have happened, he’s one damn lucky dude.

Either way, it reminds us all to be a little more vigilant when lane splitting out on the road.