Victory Sets Up Gas vs. Electric Battle for Pikes Peak 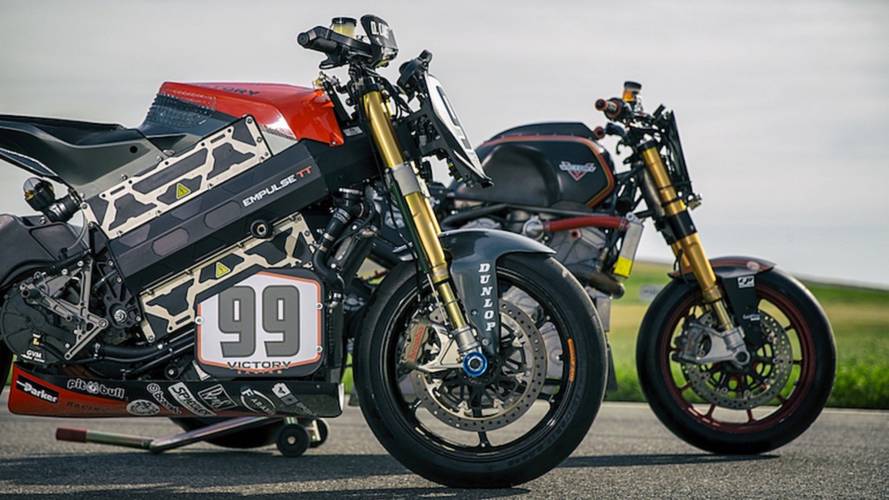 Victory Sets Up Gas vs. Electric Battle for Pikes PeakVictory Motorcycles has released images of the two motorcycles that will compete for the brand...

Victory Motorcycles has released images of the two motorcycles that will compete for the brand at this year's Pike's Peak International Hill Climb, setting up a battle between internal combustion and electric.

As RideApart reported in April, the Minnesota-based motorcycle company will be returning to the famously challenging race this year with both the Project 156 bike it ran last year and a souped-up version of the Victory Empulse TT electric motorcycle.

Last year's Project 156 rider, Cycle World editor Don Canet, will be piloting the Empulse TT, while former Pikes Peak champion Jeremy Toye will take on the challenge of getting Project 156 up the mountain.

Project 156, named for the number of turns on the Pikes Peak mountain road, is powered by a full race-prepared version of the liquid-cooled four-valve 1200cc DOHC V-twin used in the Victory Octane. Aesthetically, the Project 156 bike doesn't appear to have changed much from last year's entry, a fact that may cool rumors from a few months ago that a production version of the race bike was in the works.

That said, a fair amount of time has gone into tweaking the inner workings of the bike to hopefully prevent a repeat performance of last year's DNF.

San Diego-based racer Toye, who took home PPIHC Rookie of the Year and King of the Mountain awards in 2014, says he’s enthused about the opportunity to compete aboard Project 156: "After seeing Don ride Project 156 last year... I can’t wait to give it full stick up the course.”

Meanwhile, Canet will be aboard a motorcycle that's highly unlikely to suffer the vapor lock issue that robbed him of a finish in last year's race.

“One of the inherent advantages of an electric motorcycle up Pikes Peak versus a normally aspirated engine is the consistent performance regardless of the thinning air,” said Brandon Kraemer, product manager for Victory Motorcycles.

“Having now had a leg over... I'm very optimistic about our prospects," Canet said. “Pikes Peak is an ideal venue for an electric powered bike to showcase its performance potential.”

It is also, according to the Victory, a good place to test and develop technologies that will one day find their way into the brand's production motorcycles.

“Victory Racing serves as an international R&D program and test beds for future products," said Alex Hultgren, director of marketing for Victory. " is exactly where we need to be... We can’t wait to see which bike comes out on top in this battle between gas and electric motorcycles.”

The Pikes Peak International Hill Climb is scheduled for Sunday, June 26th. The event is expected to feature a field of approximately 100 competitors.