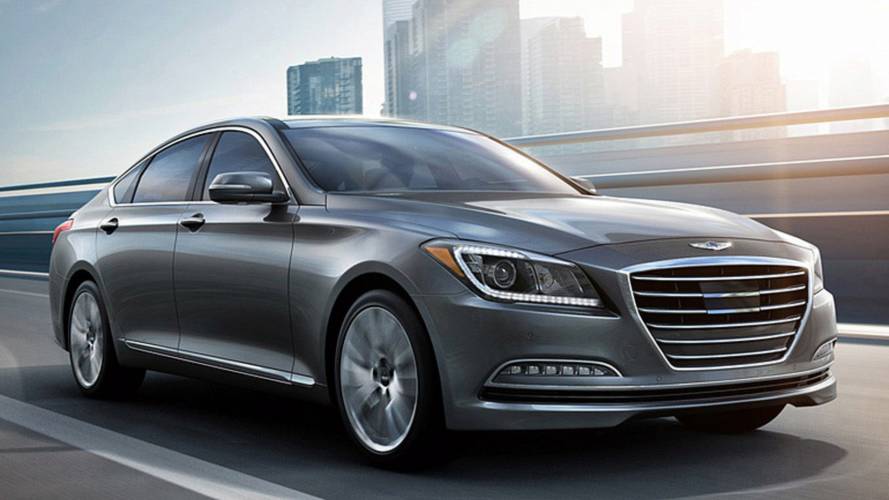 Does the 2015 Hyundai Genesis have what it takes to justify the $50k price tag? Find out in our DriveApart Drive Review.

As someone firmly entrenched in the world of auto writer-dom, it’s expected of me to get all hot and bothered about the Hyundai Genesis sedan. After all, it’s big, bold and brash, it’s got a sport-tuned chassis, and most importantly of all, it’s rear-wheel drive. So why, then, can’t I get excited about this car?

Rather than make you read the whole article to find out, I’ll give you the tl;dr version right here—it’s because this $50,000 Genesis doesn’t feel that different from a $32,000 Sonata Limited. And as both cars feel similar inside and out, why spend the additional $20K for the 2015 Hyundai Genesis?

Sure, this Genesis features aluminum trim, puddle lamps that display the Genesis logo, and a powerful infotainment system, but it lacks the premium feel its $50,000 price tag demands. The leather in the Genesis feels identical to that of the Sonata, for example, as does the cheap-looking (and cheap-feeling) plastic.

And the drive isn’t tire-shredding, power-sliding bliss either. Powering my Genesis tester is the base 3.8-liter V6, rated at 311 horsepower and mated to an 8-speed automatic transmission. On paper, that’s a huge jump up from the Sonata’s 185-hp four-banger and 6-speed auto. But since both cars are tuned with a nod to efficiency, the actual drive doesn’t feel that much different.

Power delivery is smooth, but given the Genesis’ sporting pretensions, I want a more forceful shove. And despite Hyundai’s claims of a sport-tuned chassis, this Genesis isn’t a car that encourages a spirited romp through the bends. The steering lacks the directness I need from a sports car, and overall it just feels too big and heavy for corner carving. That said, the Genesis is comfortable and quiet, and it works very well both as a city commuter and as a long-distance cruising machine. But then, the same can be said for the Sonata.

Hyundai’s Genesis does have a ton of tech inside its spacious cabin, including a high-end Lexicon 17-speaker sound system, a 9.2-inch high-def display, heated and ventilated front seats, and power everything. The problem, again, is that it’s all surrounded by cheap-feeling materials. I don’t care that the matte-finish wood trim is real – all I see are the plastics from an Accent.

READ MORE: Why You Should Take Notice of Kia's Sleeper: The Kia K900 Sedan

What really bums me out is that I know Hyundai can do a lot better. If sister company Kia can give its K900 a premium cabin, there’s no reason Hyundai can’t do the same. What’s more, a car like the Lexus GS – against which the Genesis directly competes – starts at just $47,700. Granted, that GS may not have all the options found on the Genesis, but it offers a more upscale feel both inside the car and—just as importantly—at the dealer.

That’s not to say that the Genesis is a bad car. It’s actually a nice ride, with clean style, decent power and a comfortable cabin. And if all of this came in at the advertised starting price of under $40K, I’d be singing a much different tune. But as it stands, if you want a fancy Hyundai to tool around in, save your money and just get a Sonata. Or spend that $50K on something with a true sports/luxury pedigree, like the Lexus GS, BMW 5 Series or Audi A6.