Torque: 4 Things that Worked in This Awful Biker Movie 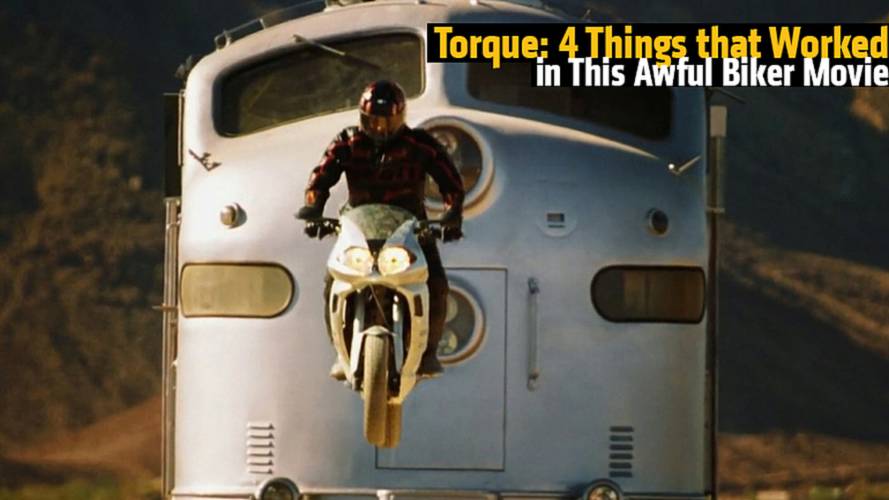 As quirky as the movie Torque was, some things did actually work for this outrageous film.

There's no denying the fact that Joseph Kahn’s 2004 directorial debut Torque was an awful piece of excuse to be called a mainstream Hollywood movie. The director made a disastrous shift from music video direction to the big screen, and the result was nothing short of a debacle of epic proportions – critically and commercially. It sank without a trace and since it didn’t have such an awesome cast or crew on board to have gone down with it, nobody cared that much.

However, we decided to give the actioner one more chance at redeeming itself and flipped on the DVD this weekend. Did the “Biker Movie for the MTV Crowd" succeed? To some extent, yes.

It's still among the trashiest movies ever made, but we chose to be the Devil’s Advocate here and found out what worked.

Yep. We are hanging on to anything remotely good we can find about this movie, and thankfully the opening sequence and the credits following it doesn’t disappoint. It shouts from the rooftops that this is an ambitious biker equivalent of the Fast and the Furious series. It even goes to the extent of mocking the car crowd for their addiction to that particular franchise built on speed.

The sense of thrill in the chase sequence—where Cary Ford’s Aprilia zips right through the narrow space separating the souped-up Japanese sports cars—practically humiliating them is pretty good for a start. The opening credits that followed was also mighty good in terms of cinematography, location, and slickness.

Let’s be honest here. Torque had the look, feel, and above all, the treatment of a motorbike porn video. It had a rather delectable and juicy line-up of superbikes, custom rides and cruisers filling up the scenes. It was overpopulated with dozens of smashing and stunning wheels from beginning to end: Honda VTR 1000 SP1, Aprilia RSV Mille, Honda CBR 954 RR, Triumph Daytona 600 TT, Triumph Daytona 955i, Yamaha YZF R6, Kawasaki 250 Ninja, Kawasaki ZX-7R, Suzuki GSXR. Also add to the list a handful of Harley Davidsons and the lunatic and insanely awesome MTT Y2K. It’s very unfortunate that the Y2K hyperbike was awfully underutilized in the vomit-inducing final chase sequence that had the polish of a late generation Road Rash video game.

READ MORE:  Video: Is That a Predator Biker?– Now We've Seen it All - RideApart

Fact: Torque has fetched nominations in the Taurus World Stunt Awards in multiple categories. To the uninitiated, the Taurus Awards is like the Oscars of the movie stunt world. If you accept the inherent silliness of the plot and the treatment, you’ll see that Torque does have some engaging and well-executed action set-pieces—including that much-loathed “superbike-battle” in the woods. The production design crew may have failed in making us believe that they were superbikes and not dirtbikes with mock fairings slapped onto them. Yet, the stunt team did a phenomenal job with antics that they pulled off with those machines.

It’s so bad, it’s good (to play in the background)

The action is too over-the-top and regardless of the fact that it embraces its hyper-realistic silliness, it is indigestible most of the time—the color-correction is dreadful to the level of over-saturation and the visual effects would look world-class if it were a video game from the 1990s. Yet, you get to laugh unintentionally and hilariously at everything that happens onscreen, including the longest line of men taking a leak by the side of a highway.

Most of us do have a list of movies that we would choose to watch repeatedly despite their awfulness. Those movies seldom make sense, have no cinematic or artistic value, are poorly written, hideously acted and pathetically directed. But they're exactly what we need when we would like to have something playing in the backdrop when at home, occupied with something else. Once in a while you can take a look at what’s happening onscreen and then let it play as you get back to your chores. The least amount of investment is the rule for such movies and Torque is it.

(Tail Piece: Joseph Kahn went on to make one more movie before going off the radar. But he returned with a highly-acclaimed R-rated short based on the Power Rangers universe which is receiving rave reviews right now.)