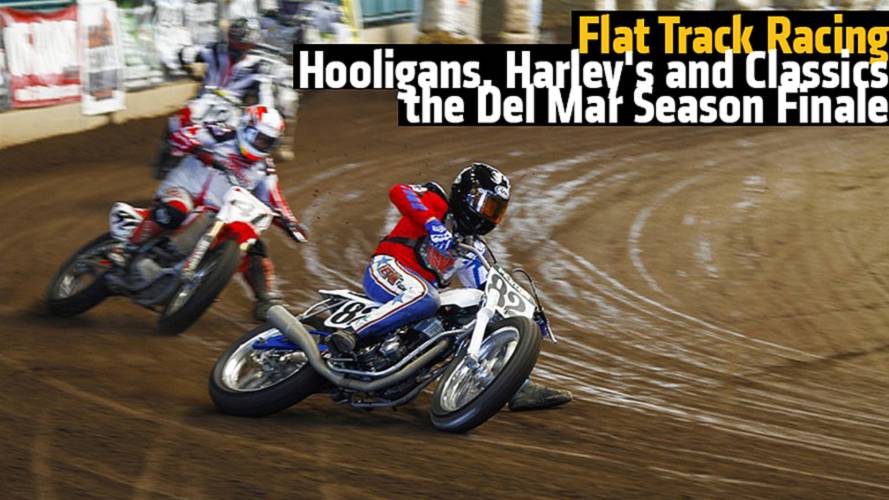 Find out why flat track racing is making a comeback in the best of ways and for all the right reasons at Rideapart.

I love flat track racing, but for years thought it was merely restricted to speedway bikes on rare occasions. Luckily, it’s coming back with vengeance. Returning to it’s former “On Any Sunday” glory, riders of all shapes, sizes, ages, or experience level show up to the track on whatever bike they could pull out of their barn. The IV League Flat Track’s season finale at Del Mar raceway was a mix of everything, with only a few things in common: slinging dirt, loud exhausts and sliding... lots of sliding.

A two-day event where the mornings started off with practice and heat races (a heat race is a race where your finishing place results in your starting place for the main event). Then main events began with a collection of race bikes and kids/youth classes. The day consisted of 30 classes total, with many riders entering multiple races.

There were mini bike and scooter classes, along with age designations, 35-plus and 50-plus and youth 50cc, 125cc, 250cc and 450cc. Yeah, there were kids racing full-fledged badass 450cc race bikes out there. Most of them unlicensed, looking like they could barley stand up on the bike sitting still. Yet, they slung 'em into the corners, hanging off their seats, throttle pinned.

There were several vintage classes like the 400cc-under and 401cc-up. Also a brakeless class, yes you read that right, bikes without brakes. God, I love flat track racing.

Our favorite were the vintage classes, run-what-your-brung, and Hooligan class that consisted of a variety of mostly street-legal bikes. The Hooligans were tearing it up with tracker-style Sportsters racing up front.

A bunch of the Deus crew was there, including Julian on this vintage Triumph.

The fastest guy of the day was riding the Rusty Butcher Harley-Davidson tracker, who now has a line of customers wanting tracker Sporties like his. Our new friend from Burley Brand (orange tank), ran his tracker Sportster, with no idea where he finished... but that’s not the important part.

Sponsor and event promoter Roland Sands was out there slower than most in his class, but still managing to be cooler than any of them running a brakeless Harley-Davidson Flathead.

Our friends at the Moto Attic were also tearing it up on their original vintage Suzuki. During his first main event, he was taken out in the first turn, taking a hard hit that damaged his knee forcing him back to the pits.

You can't forget the scooter and mini bike classes too.

Always a showman, the Fast Frenchmen Dimitri Coste, known as MotelCoste on social channels, a photographer and overall cool guy was tearing it up, fast as hell on his 750cc Triumph Trackmaster. After his clean, exciting pass for the lead, his goggles started giving him trouble, so without lifting the throttle, he simply took them off.

“Vive America,” he shouted with a mic in one hand and the checkered in the other. Then drove off in a white ‘60s-model Cadillac convertible, trophy on the floorboard.