Kawasaki H2 at 2015 Pikes Peak - We Have the Inside Scoop 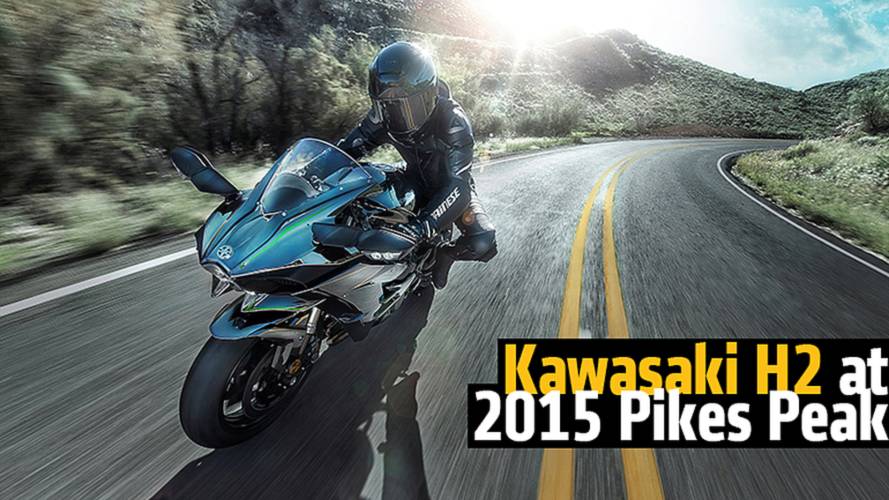 How do you think a new Kawasaki H2 would do at Pikes Peak? With a supercharged motor helping to offset the power loss of thinner air and 200hp from the factory, it could be the fastest production bikes to ever tackle the mountain.

At this moment there is no official entry from Kawasaki in the race. They've had major names in motorcycle racing approach them about campaigning an H2 or H2R on the mountain, but with the limited number of bikes in general means their media and race fleets are even smaller.

There is one man with a dream to race the H2 at Pikes Peak this year and the bike to do it. Unfortunately, he's facing some hurdles with timelines; namely that production of the bike is behind schedule, the port of Long Beach is still cleaning up after a protracted strike. Every second that ticks by is a second he loses in testing, prepping and modifying the bike for the race. We still wanted to talk to the man who would be "King of the Mountain",

Takahiro Itami, has been to Pikes Peak before and now waiting on his very own H2 to take it there for this year. We noticed his name and bike on the entry sheet and decided to give him a call. (The answers are unedited from Takahiro, PP stands for Pikes Peak)

RideApart: Are you going to run it as close to stock as possible or will there be any major performance modifications?

Takahiro Itami: I’ve been planning to go as close as it is to stock. Nevertheless, I will change the exhaust, steps, tires. Other than that, I might tune a bit of the ECU only to adjust the high altitude there at Pikes Peak (PP).

TI: The answer for that is simple, because, of the course PP is obviously a high power course and everyone in this world wants to see that H2 to growl, right? I know it would be even better with the H2R, but we’ll see.

RA: Who is helping you with this endeavor?

RA: Have you talked to Kawasaki USA about getting a bike if you cannot ship your into the USA?

TI: I’m looking forward to the whole process from modifying to packing for the Pikes Peak starting from Japan. I want to write about the whole experience of it. Therefor, if they can’t make it by the time for the entry of this year, my challenge might be delayed to next year.

RA: What is your ultimate goal?

TI: Of course, to win the classified class and to be the overall champ of the motorcycle class, and my last goal is to be in the top 10 of the whole entry (-including the cars.)

RA: Now a little about you. I am not familiar with your career and I don't think our readers are either.

TI: I make my living out from writing and editing articles for motorcycle and car magazines. Right now, I’m a freelancer. But, I used to be the editor of chief for a magazine called “Clubman” which is one of the major title in Japan. I think I heard that the guy who was also in the PP race last year, with the Ducati - Mr.Don Canet was also a journalist. So, I think I might be close to where he’s at.

RA: You mentioned you are also a writer, what publications do you write for?

TI: I write regularly for magazines like “RIDERS CLUB”, “DUCATI MAGAZINE”, “BMW MOTTORAD JOURNAL”, “BIG MACHINE”, “YOUNG MACHINE”…etc. I wasn’t that young when I started my career. It started from 2003, when I was 31. Until then, I used to work as a secretary for a publisher, but I always loved motorcycles. So, I asked them to move me to the editing team, and that was my start as an editor.

Then, when I went to coverage The Isle of Man TT Race in 2005, I knew I would eventually quit my company in a few years to entry that race. Two years later, I really did quit and left my position in 2007. I’m 43 now, and I’ve been racing seriously since then.

I started entering in some amateur races and then I got my professional license in 2009. So, next year I entered the Isle TT with the GSX-R(SS600 class). That was my first int’l formality type of race. So, it’s been only 5 years as a professional racer. After the Isle I took part in the Suzuka 8 hours, three times (2012-2014) with a Ducati. I’m planning to entry with a 1199 Panigale this year.

READ MORE: Do they fly or fall? We Review the Bridgestone Trail Wings Tires

RA: Is this your first time at Pikes Peak?

TI: Thank you for contacting me for this interview. Any publicity would be helpful for my next move. I really appreciate your effort you’ve made, but unfortunately the delay of the manufacture line for the H2 and the effect of the strike from the east coast, things aren’t going so smooth. To make it to the race, I’ve got to ship my stuff by the third week of April. But, I got a call that that’s about my time to get my motorcycle in my hand. And I know it would be too dangerous for me not to be able to even test ride it. So, I would have to cancel my entry if the schedule doesn’t roll faster than this plan. But, I am doing my best and begging a bit for it. So, we’ll see what happens.

RA: I know we are excited to see an H2 tackle the mountain. With a rider who has experience on the course, a bike as powerful as the H2 Takahiro-sans goals are definitely within reach.