In the Curve: Dumping Oil on the Road, Who's to Blame? 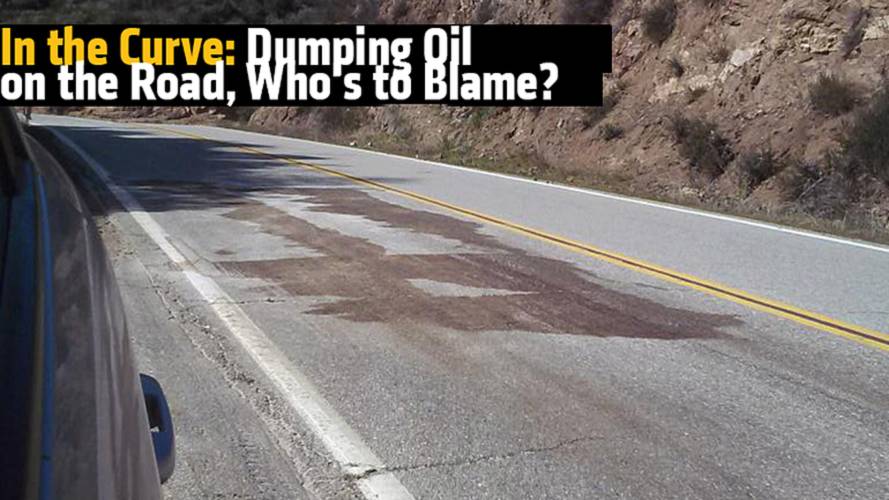 In the Curve: Dumping Oil on the Road, Who's to Blame? Someone has been dumping oil across Glendora Mountain Road, in Southern California. With miles...

Someone has been dumping oil across Glendora Mountain Road, in Southern California. With miles of twisties and limited driveways, it’s been a So-Cal destination for cyclists and motorcyclists alike.

It seems after our first report of this incident, commenters are strongly divided (original post titled: Video: Someone Is Dumping Oil On The Road And Putting Motorcyclists at Risk). Both want swift and firm justice, but both want it for the other party. Some want the person guilty of the malicious act to be found and beaten. While, others support the actions of the oil-pouring bandit, as a punishment to those speeding on the mountain road.

While the Internet is mostly made up of trolls that leave me smacking my head against the keyboard in frustrated disbelief, this argument brings us to a new level of ridiculousness. The Internet causes people to be removed from the real world, and the comments on this story bring it to an entirely new level. I don’t believe people know exactly what they’re saying.

The Mind of a Mad Man or Woman

The assumption is the oil-spiller’s actions are done to “teach a lesson” to those reckless speeders who put others in danger on a weekly basis, dragging knees and breaking the double-yellow.  So, by deliberately dumping oil on the road, how are you any different or more justified? You’re putting cyclists, bikers and even drivers’ lives in danger.

The oil-spiller believes they’re Batman, taking back their town and bringing justice to the world. But what they don’t realize is that Batman displays purity. He won’t kill his enemies, despite them killing his allies. He believes in justice and the importance of principles. This oil-spiller believes that they are just in their actions, but they’re potentially killing innocent people.

I’m already envisioning the above sentence being copied and pasted many times in the comment section followed by, “Those speeders and reckless riders are not innocent.” When was the last time you sped, rolled a stop sign, or dragged a knee? Do you think you deserved death for your mistake?

Whether their intentions are in fact malicious or murderous, that’s only the surface of this issue. They have an outlook on life that, until recently, I thought was a new way the world looks at things. People believe they are there to punish, teach and educate others.

Similar to the thought process you’ve probably already had during a fit of road rage: “well, that guy is tailgating me, if I brake check him really hard, that’ll teach him.” No, it’ll simply put people in danger. Why do it? Because you think this will change their mind or save others who cross this driver’s path in the future. No, it’ll merely make the tailgater believe they’re justified in their actions by thinking you’re in the wrong for brake-checking them. Both drivers become angry at each other and think they’re in the right, while the other is wrong. You know who is to blame? Both parties.

Like the birth of a superhero, maybe this person spilling oil is out to seek vengeance for the loss of a loved one at the hand of a speeding biker? Glendora Mountain Rd. is famous for speeding bikes and high rate of crashes and death, so it’s possible. Even then, this person is a villain masking themselves out to be a saint. Doing two wrongs thinking it makes a right, is elementary-school ethics.

There is no other action in this world that merits death, only murder. By spilling oil on the road this person is potentially killing people. For the fun of it, to teach a lesson to speeding bikers, or to simply sit back and watch? Either way, it’s wrong.

Mulholland is not a race track (at least not anymore) and I don’t give a damn what you say. My family came and visited me a couple winters ago and naturally I took a convoy of them in the family van and my convertible up to Mulholland to see the view and experience Malibu for the first time.

As we ventured down past the Snake, several sport bikes were waiting to pull out of the Rock store. I slowed down to let them out, but they sat there fiddling with a GoPro so I continued on to find them riding my ass moments later. I pulled over at the first chance, less than a 1/4 mile after. They blasted pass me with a dirt look, as if I were an asshole for blocking them. I’m a rider, I love Mulholland and if it weren’t for the fact that I had 6 people with me that day I would have been riding. What the hell? Did I deserve that? Did it make me embarrassed to be in California, absolutely. It pissed me off and when I got back behind them I wanted to give them a piece of my mind, but did I believe they need to die or crash as a pay back? No.

The idea that one must be punished because they’re a member of a group, but not by their actions is a thought process of lunatics. The driving force behind many wars, mass murders and genocides. Serial killers believe it was their duty to kill a large group of people. I’m not calling this person a serial killer, just noticing the similarities in the thought process.

READ MORE:  If You Buy a Motorcycle - You Will Not Die, You Will Live - RideApart

One of the first instances, was road spilled over two lanes causing two major car crashes. Photo courtesy of www.glendoramtnroad.blogspot.com

After reading over the comments one more time, I should make sure to mention that I don't condone reckless riding in any sense, just that vigilante justice is not the answer.