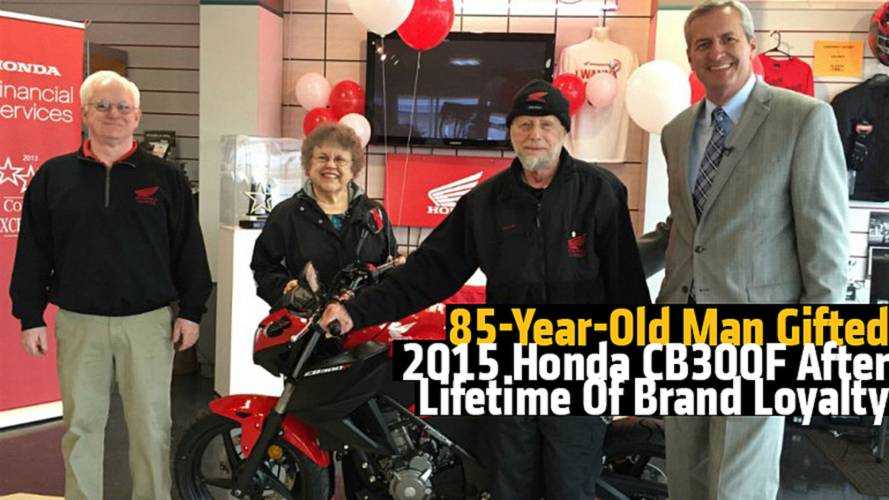 Harry Adler's loyalty to Honda paid off big time. After a lifetime of support, the company gifts him a 2015 Honda CB300F.

Brand loyalty is not something we often see anymore. When sticking with one particular brand for any extended period of time, one often experiences a company's good times and bad. You may enjoy a certain brand until one product sitting in your garage is nothing but a pile of junk—and from that point on you vow to never buy that product again. For Harry Adler, a lifetime of brand loyalty has finally paid off.

Not only has Adler been loyal to Honda, but also the Horner Honda dealership. Forty-eight of Adler’s Hondas came from Horner Honda, with 38 of those through Honda Financial Services. Currently, Adler owns eight Honda motorcycles like any self-respecting 84-year-old octogenarian should.

WATCH THIS:  Someone Is Dumping Oil On The Road And Putting Motorcyclists at Risk | RideApart

“Over the years, my number-one form of recreation has been motorcycle riding, and based on my experience, Honda is the best,” said Adler in a press release, who has ridden motorcycles since 1963. “They make a great product, and the people that represent the company are wonderful. The dealers that I’ve been in contact with over the years have always been very responsive and taken really good care of me, especially Horner Honda, which I’ve used for the last 20 years. The CB300F was sort of the one bike that I was missing in my portfolio, and this gift was quite a surprise. I look forward to riding the bike.”

“It’s rare that a company gets the chance to honor an outstanding customer like Harry Adler, who’s shown unsurpassed loyalty,” Paul said in a press release. “We’re thrilled to be able to recognize Harry’s longstanding commitment to both the Honda brand and Honda Financial Services. It’s truly a pleasure for us to be able to present Harry with his 55th motorcycle, a new Honda CB300F. We hope his new bike brings him years of riding pleasure and adds to the enjoyment Honda products have already given him over the years. We love having Harry as part of the Honda family.