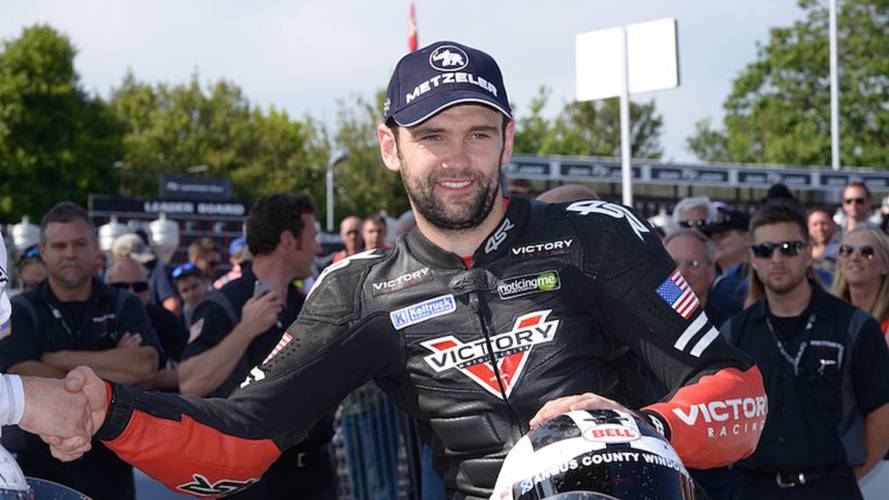 In practice sessions earlier in the week, Dunlop and the Victory team had been hot on the heels of living legend John McGuinness and his Mugen bike. However, during the race McGuiness unexpectedly started slowing past Sulby with a technical issue, ultimately landing him in fourth place.

Last year, Lee Johnston placed third for Victory Racing with a 111.620-mph lap so Dunlop’s 115.844 mph is considered a big step forward. Dunlop had ridden increasingly fast laps on successive practices throughout the week, achieving 112.85 mph in the first practice and 115.43 mph in second practice.

“I’m really happy,” Dunlop said after the race. “I didn’t get to race the electric bike last year, but I could really feel the difference in the Victory RR. It’s a massive step forward. The bike has a really, really good motor, and massive respect to the Victory Racing boys for putting such a good bike together.”

The Victory RR electric racer was the fastest machine through the speed traps on Wednesday –– reaching 160 mph through the Sulby speed trap and sprinting across the Grandstand at 143.11mph.

Victory, understandably, says it is thrilled with both its competitiveness and how it is pushing electric motorcycle technology forward. Both the Victory RR and the Empulse RR bike (which will be raced at Pikes Peak later this month) are test beds for the firm’s future products.

“We’ve managed to hit our goals with the added benefit of moving up one step on the podium and closing the gap on the top team,” said Victory Racing Team Manager Brian Wismann. “I’m feeling very fortunate to be involved with this historic race and to get the opportunity to represent the potential for ‘Modern American Muscle’ performance with Victory Motorcycles.... Hopefully next year we’ll have the chance to improve further and give the Mugen team a run for their money.”

Gary Gray, director of motorcycle product for Victory Motorcycles, says he is pleased for the Isle of Man team and is now eager to see how the brand performs at the the Pikes Peak International Hill Climb.

“Today was a testament to a team with grit and perseverance,“ he said. “I couldn’t be happier with our result... We fly back tomorrow to practice on the mountain at Pikes Peak with our octane-powered Project 156 race bike and our other electric race bike, the Empulse RR. The knowledge we gain at these races goes into making our production bikes faster and more reliable.”