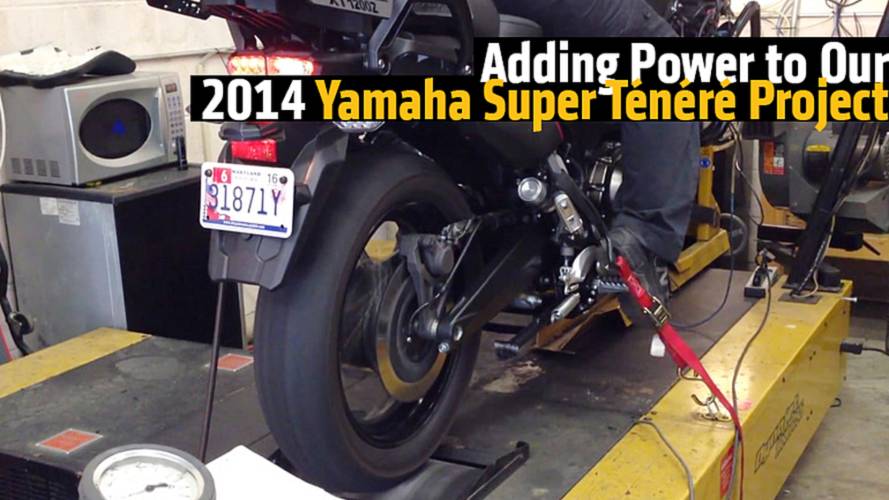 What does it take to wrestle more power out of a Yamaha Ténéré? Was it worth the effort?

As many of you know we have done a lot of work to our Yamaha Ténéré. It's the basis for a lot of parts, luggage, seat, and tire reviews. While it has been a great work horse for us, but it still needed a bit more grunt. With that in mind, we changed a few parts and got some surprising results.

Your basic Yamaha Ténéré makes about 85hp at the rear wheel. That's not as anemic as a new model Harley Davidson, but it definitely lags behind class leaders like BMW, Ducati, and KTM that all put out around 125hp to the tarmac. (These numbers are at the wheel, most quoted numbers are at the crank.) That's a 40hp deficit combined with the Ténéré being the heaviest bike of the bunch. In reality, the difference in real world performance is not as significant. You don't spend a majority of your time with the tach needle buried, and the Ténéré makes wonderful torque and horsepower at lower RPMs. If you start playing follow the leader on Mulholland with those other bikes you will get dropped behind on corner exit.

Because the Ténéré is low on power out of the box, we didn't expect to get a lot of performance out of it without spending a ton of money. We started where everyone does with the first modification—a Yoshimura USA stainless steel slip on. Besides being about eight pounds lighter and a heck of a lot prettier, the bike sounds so much better. Typically that change in sound causes us to believe that new pipe added a lot more power than it really does.

To test the power, we took our bike to the dynamometer and decided to see exactly how much we got instead of taking a wild bench racing guess. Numbers don't lie and for $390 we took our Ténéré from 85hp to 93hp. We improved throttle response, and take off from a dead stop also improved. Fuel mileage, however, stayed the same and it did make the fuel curve a little fat. We knew we were going to do some other work, so this was an initial test—fuel tuning was yet to come.

READ MORE: How It Works: The Basics of ECU Tuning

The next goal was to break 100hp and to smooth out the fueling. Running your bike a little fat is safer, but it's inefficient. The closer you can get to ideal, the more power you will make and the more mileage you will get out of a tank of gas. In a previous post, we talked about "The Basics of ECU Tuning" and how a company like ECUnleashed can reprogram your stock ECU. We decided to give them the opportunity to see what they could do with our Ténéré. We also reached out to PowerCommander for one of their V units and an AutoTune module.

ECUnleashed lets you know up front that they can build a map for your setup, but it may need tweaking. Every bike is different and while they can get it close, they know that sometimes a particular bike won't be perfect.

We also knew that just tuning was not going to hit our 100hp goal—we also decided to improve the exhaust. With a return of 8hp from the slip on, we hoped we could get a similar bump from replacing the mid-pipe and getting the fuel spot on. We sourced an Arrow mid pipe designed for the Ténéré ($330). Once again, we dropped almost 10 pounds of weight and the new pipe takes up a lot less space under the bike. Doing this also improved ground clearance, which is happy byproduct.

We have detailed the ECUnleashed process before, so we will keep it short: You first fill out the application with your bike details, they build a map, you send in your ECU or take it to a tuning center, and then you reinstall it after it's programmed. We had ours built for the new pipes, a couple options for the O2 sensors and throttle control. The cost varies depending on features and options, but expect to pay around $500 and up for the service.

We installed the new parts which was easy and straightforward, and the bike fired up without a hiccup. We ran it for a few days to let the bike settle from all of the changes, eliminated any exhaust leaks, and got a feel for how it performed. Next, it was off to the dynamometer. We had some higher expectations with all of these changes and were definitely hoping we had passed the 100 hp threshold.

READ MORE:  The Latest and Greatest ADV Gear For Your Next Moto-Adventure - RideApart

Did We Make it?

Yes we made it. We tested the new parts with a zero map in the PowerCommander so we could test the ECU tune and parts as delivered. We made it to 103 hp, and the fueling was just about spot on throughout the RPM range. We used the PowerCommander to tune the idle, and closed the throttle to add less than two percent in a few places to make the best power. If we weren't chasing perfect, the PowerCommander would not be needed. The ECU tune was very good—perfectly useable and safe for years of riding.

Was it Worth it?

This is a highly subjective answer. To me, as the bikes owner and rider, it was worth it. The Ténéré has been an excellent motorcycle and a really capable mount. The extra power has been perfect for two-up riding and the added grunt helped with off road riding too. For a total cost of $1200, it's a huge saving over buying a more powerful bike. Many will not care about the power deficit and some (like me) will upgrade every bike so that cost will be spent no matter what bike we buy. Enjoy the videos below of some screaming dyno runs.

This was the first run with just the Yoshimura Slip On.

Second run with the Arrow mid pipe and tuned.

We also want to send a big thank you to MRP Motorsports and Kenny Martin for their time and assistance with the dynamometer run.