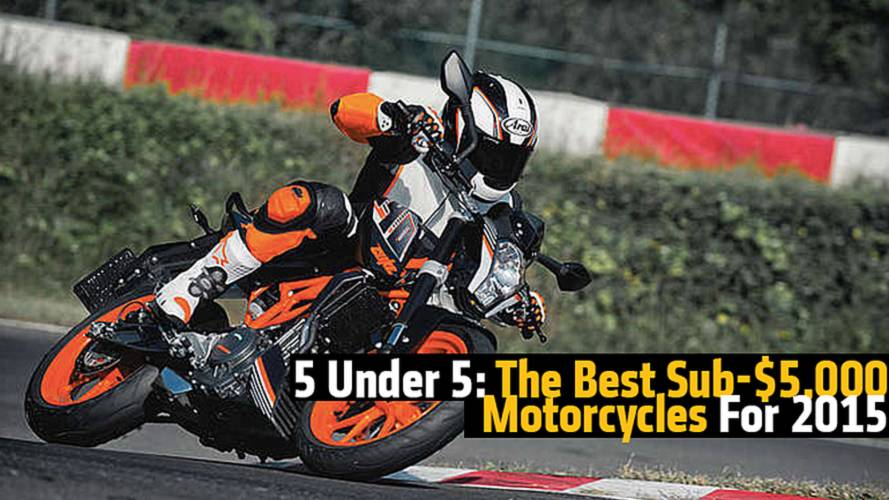 Want a new bike? On a budget? We're here to help with these inexpensive motorcycles.

Something I've learned as a noob - you don't need a whole lot of money to get into motorcycling. And while many experienced riders will tell you that your first bike should be a used beater, there's a lot to be said for the benefits of new technology and engineering - and a warranty. If you're looking to buy your first bike - or maybe you just want to add a cheap model to your stable - here's our list of this year's best bikes for under $5,000.

There will probably be some debate here as to whether or not the 2015 CBR300R is a better bike than the Honda CB300F for noobs. RideApart boss Jesse Kiser would probably fall on the side of the 300F, as it offers new riders a bit more confidence thanks to a more upright stance and wide handlebars. (You can read his review of the CBR300R below.) We're giving the little CBR the nod here, thanks to the ABS option - which, when added, still keeps the bike under the $5,000 mark. (Barely - the price above is for the basic black or red models. The black and yellow version pictured comes in at $4,949, a small price to pay for those who want a bike that looks like something Tron would ride.)

Still the goofiest looking motorcycle in mass production, Yamaha keeps building the venerable TW200 for a reason: like a cockroach, it's exceedingly hard to kill. Those big-ass tires can tackle just about anything, from chewed-up city streets to dirt and rocks. There's not a lot of plastic, so you can bang the hell out of it - slam it into a tree, the side of a city bus, whatever. Drive it off of a cliff - you'll land on those balloon tires and bounce your way to safety. I exaggerate, of course. But the TW200 has become somewhat legendary for its hardiness and fun factor. And this is a bike that you'll really never outgrow; if you decide you want a bigger ride, presto, now you have a weekend toy. New features for 2015? Well, the gas tank has a pretty sweet new graphic. (Photo courtesy of Yamaha.)

Squeaking in at a buck shy of the $5,000 mark, the KTM 390 Duke is FINALLY making its way to the States. The four-stroke 373cc single comes with standard Bosch ABS and a claimed dry weight of 306 pounds. And...that's about all we know, as we've yet to ride one. Reviews on other motorcycle sites and magazines have been overwhelmingly positive, leading us to believe that when the Little Duke gets here it should make quite a splash. Yes, we know we told you in 2013 that the 390 Duke would be here last year. But KTM confirmed the price (at least) in a press release late year, and said that the bike would be available in the U.S. this spring. Fingers crossed that KTM really means it this time.

Laura Llovet's review of the Yamaha R3 (linked below) is very thorough, and tells you everything you need to know about Yamaha's new small-displacement sport bike. I'm going to differ from her in one regard; while the R3 is a great bike for beginning riders, it's not a beginner's bike. Or rather, it's not just a beginner's bike. From Laura's account and what we've seen, the R3 is a great bike for riders who want a lot of bang for their buck and who don't have plans to trade up. There's clear evidence of quality in both performance  - as evidenced in Laura's review - and appearance. IF we had a beef with the R3, it's that the bike doesn't offer an ABS option (yet) and no slipper clutch (which didn't bother Laura, but might cause some riders to look at at a Ninja 300). (Photo courtesy of Yamaha.)

We'll give a hat tip to the Suzuki DR200S - it's a few hundred bucks cheaper - but for low-price dual sports we're going to go with a RideApart favorite, Honda's CRF250L. A bit more power gives the Honda the edge here; if you're going to take your dual sport into city traffic or even down a two-lane highway, you're going to want it.  (Photo courtesy of Honda.)