Take a Trip: Go to the Women’s Sportbike Rally in Big Bear 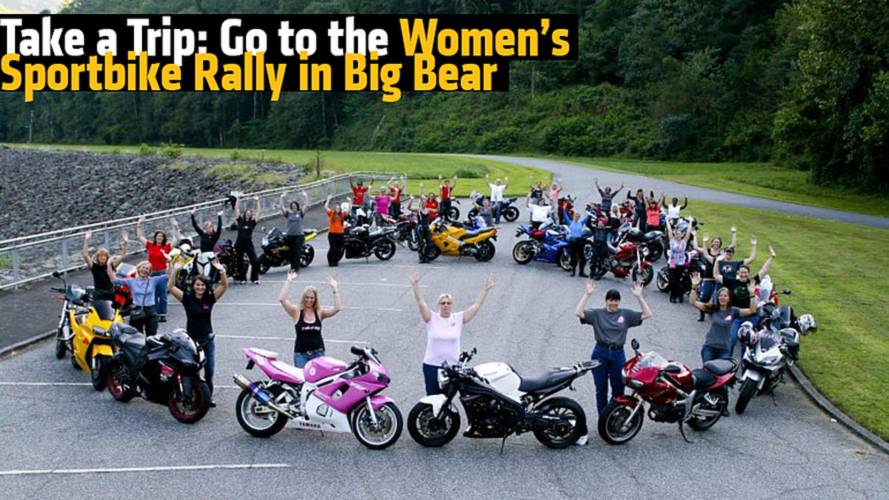 Take a Trip: Go to the Women’s Sportbike Rally in Big BearThere are many social media campaigns praising women who ride and encouraging such women to...

There are many social media campaigns praising women who ride and encouraging such women to befriend each other. However, I actually think it’s really difficult to befriend other women riders, and I’ve always feared that maybe I'm the only one that has this opinion.

READ MORE:  Learning How to Lane Split in One of America's Most Congested Cities | RideApart

As much as all women events intrigue me, I’m a little reluctant to go to one. I let out a sigh of relief when Brittany Morrow told me, “I’m going to be frank with you. It’s tough to meet other women riders. Women are just as competitive as men. We feel like we have to prove ourselves. Not only that, but we’re always competing with one another, and some women get into riding for social pressures or wanting to look cool.” Yes, exactly.

We wrote about Brittany Morrow last year—she’s the superwoman who started the Rock the Gear campaign, which heavily influenced me to buy all the proper gear when I started riding. As if running that campaign, being a military motorcycle instructor, and a representative for Icon wasn’t enough, Brittany has also been involved with the Women’s Sportbike Rally held in Deal’s Gap. The event has been running for almost ten years, and she has been a part of it for most of its life. This year, she’s hosting the first ever women’s rally on the West Coast from May 29-31 in Big Bear, California. I was intrigued by her event and decided to chat with her about it.

“My first Women’s Sportbike Rally was actually the second event that they ever held,” she told me. “It was such a fun weekend and I made so many friends. I have continued to go every year since then.”

A few years ago, Brittany moved to California. She began toying with the idea of hosting a West Coast event, and spent several years talking it over with the original founder Stephani McIntyre and current coordinator Dawn Chapell. “We have been friends for a long time, but we had to talk about the details for a few years before it happened. We wanted to make sure it would be as good of a weekend and have the same energy as Deal’s Gap,” she said.

Founder of the event, Stephani McIntyre

Having never been to the Women’s Sportbike Rally in Deal’s Gap, I asked her to describe the energy. That’s when the conversation turned from how tough it was to meet other women riders.

“This weekend, however, is a weekend to strip that all away. It’s a weekend about loving motorcycles as much as everyone else. It’s not about who’s the fastest, or who’s got the biggest bike, or who’s the best. It’s not about who’s the sexiest or who has the most social media followers. It’s a weekend about loving your motorcycle and getting to meet other women who love it as much as you do.” I wish I could relay the passion in her voice when she said this— this is an event Brittany truly loves and believes in.

She’s also very protective of it and makes sure everyone attending contributes positively to the experience. Negativity isn't welcome and neither are tomcats looking to pick up chicks—both would have to get through her before reaching the girls. However, men are allowed at the Women’s Sportbike Rally.

“Many women come to this event by themselves, but others want to come with their male companion. Maybe it’s their husband, or boyfriend, or just a male friend who has been very encouraging of their riding. So we want to celebrate that, and if a woman wants to bring a male with her then she can register him with her. It’s really great to see the men who do come out and want to show their support,” Brittany said.

Interestingly, the first Women’s Sportbike Rally in the west coincides with another special event in Brittany’s life: the 10 year anniversary of her infamous accident.

“It’s so awesome to see how far I’ve come since then. I’ll be running the event in the West Coast, but then I’ll also be attending the event in Deal’s Gap. That event is actually a week before the true anniversary of my accident, and I’ll be celebrating that too. I actually haven’t crashed a motorcycle since,” she said.

At this point in our conversation, I really wished I lived in California so I could attend the event. Brittany’s put a ton of thought into why it will be held in Big Bear.

“I wanted a location that had as much to do as Deal’s Gap. Everyone thinks of just the Tail of the Dragon, but there are actually a ton of good roads to explore out there. Big Bear is really beautiful with an equal amount of exploring for the women to do, and there are many different roads for all levels of riders. Plus, it’s off-season in Big Bear so there will be more options of places to stay and it won’t be as crowded. It’s the perfect time to go, and it will be warm,” she said.

The Adventure to Big Bear

Just getting to Big Bear is an adventure. Brittany told me that there are 4 different routes to get there listed on the website, each catering to different skill levels. “You’ll celebrate just having made it there,” she said.

From there, the weekend only gets better. From exploring new roads, to enjoy live music, to event a raffle prizes, there’s plenty to keep you busy. But on top of all that, you also meet a new group of friends. “It is such a fun weekend,” Brittany said with excitement.

This event is worth attending if you're a female rider. Your skill level doesn’t matter, because there’s really nothing to prove this weekend. The only thing you need is a motorcycle, and a bike that likes to handle the twisties would be ideal—sportbikes, sport touring, adventure bikes, and café racers. While cruisers won’t be turned away, you might have to stay on roads that aren’t as technical. If you don’t ride, you're more than welcome to go as a passenger.

“We’ve had women come as passengers just to see what it’s all about and they end up deciding they want to start riding from it," Brittany mentioned.

Also, don’t let anyone tell you that you can’t make it on your motorcycle. It doesn’t matter what size bike you’ve got. I’ve put 25,000 miles on my ninja 250, mostly solo, and it includes an Iron Butt (1000 miles in 24 hours). Making the trip out there is all about attitude. You can read more about how to prepare for a long trip in this past article I wrote.

Brittany is truly excited about the event, and is eager to make this a fun time for women who enjoy riding. And who knows, maybe you'll make a ton of friends that weekend.

WATCH THIS:  Learning How to Lane Split in One of America's Most Congested Cities | RideApart