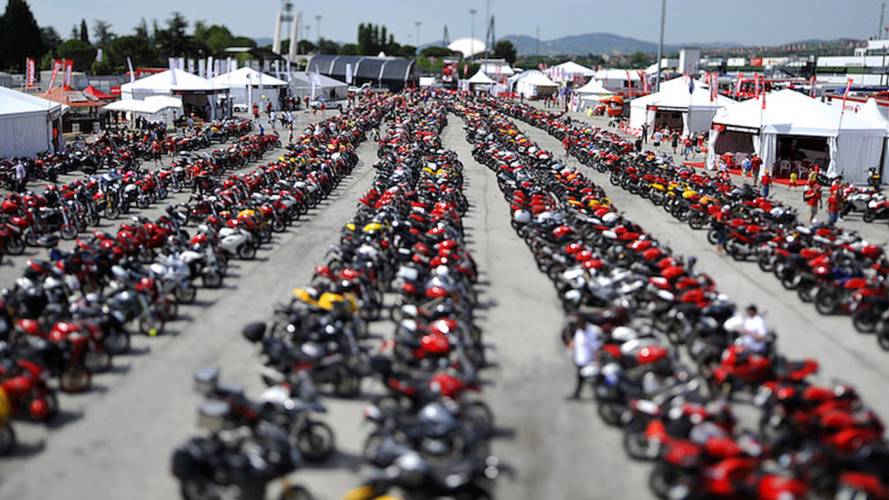 Thousand will gather in July for World Ducati Week

Ducati has announced the schedule for its three-day get-together taking place in Italy next month.

From 1 to 3 July, thousands of Ducatisti will be gathering in Bologna to celebrate the manufacturer and the lifestyle that surrounds it. It’s expected to be big. The previous WDW event, held in 2014, drew some 65,000 participants

The get-together coincides with the Ducati's 90th anniversary celebrations which, during WDW itself, will see the Ducati Museum re-open its doors after a major renovation. Ducati also promises a packed programme of events, parties, bike parades, shows, concerts and on-track races featuring current Ducati MotoGP/Superbike riders and champions of yesteryear.

Ducati stresses that it has made a commitment to making its mega-event a sustainable one. The event has received ISO 20121 (Event Sustainability Management System) certification, making WDW 2016 the first motorcycling event to receive such certification.

Ducati’s theme for the event is “More than Red,” highlighting the brand’s long-standing attachment to the sportbike world along with recently added models for new segments, such as the XDiavel, the Multistrada 1200 Enduro, and the Scrambler Sixty2.

For fans of the XDiavel, Ducati promises something it calls the “Gentleman's Lounge,” which may or may not be what we think it is (you never know with Italians). There will also be plenty of space dedicated to the Multistrada 1200 Enduro, the star of DRE Enduro, the new Ducati off-road riding school that WDW2016 participants will be able to get a taste of.

A special Scrambler “yellow zone” will feature the Sixty2 and Flat Track Pro models. The so-called Land of Joy offers a host of activities including climbing, basketball games, live non-stop music, and many other surprises including the brand new Flat Track School. Which isn’t really a surprise anymore because we just told you about it.

Friday, 1 July, takes riders to Aquafan, the final destination for the thousands of bikes that will roar out of the circuit to Riccione and the Scrambler Party. With water slides, swimming pools, a 1990s-style “foam party” and great music from the ’90s, this event is open to all WDW2016 participants.

On Saturday, 2 July, the Santamonica stadium in Misano Adriatico will reverberate to the sound of Italian rocker Piero Pelù. Every Ducatista attending World Ducati Week 2016 can enjoy another two exclusive events: the unveiling (on Saturday evening) of a limited-edition bike special celebrating Ducati's 90th anniversary; and a closed -oom offering a sneak peek at a new Ducati model in the 2017 range.

The event will host a number of races involving Ducati riders. Friday evening kicks off with the first ever “Scrambler Ducati Flat Track Race by TIM” with Dovizioso, Giugliano, Bayliss, Petrucci, Hernandez, Valia, Mercado and Xaus battling it out on the new Scrambler Flat Track Pro on the Misano Circuit Area oval. The showdown takes place along a 1000-metre track, with riders engaging in heart-stopping drifts and duels.

Another Saturday epic comes in the form of the “Drag Race by Shell”. A true Drag Strip will be set up on the straight of the “Marco Simoncelli” Misano World Circuit, with racers going head to head on awesome Diavel Carbon bikes. The high-calibre contenders will be Stoner, Iannone, Dovizioso, Capirossi, Davies, Laconi, Redding and Barbera

All the info on these events and others in the WDW programme is available on the event website wdw.ducati.com