Meet the Laser Equipped Electric Car of the Future! The 2015 BMW i8 - GuzControl 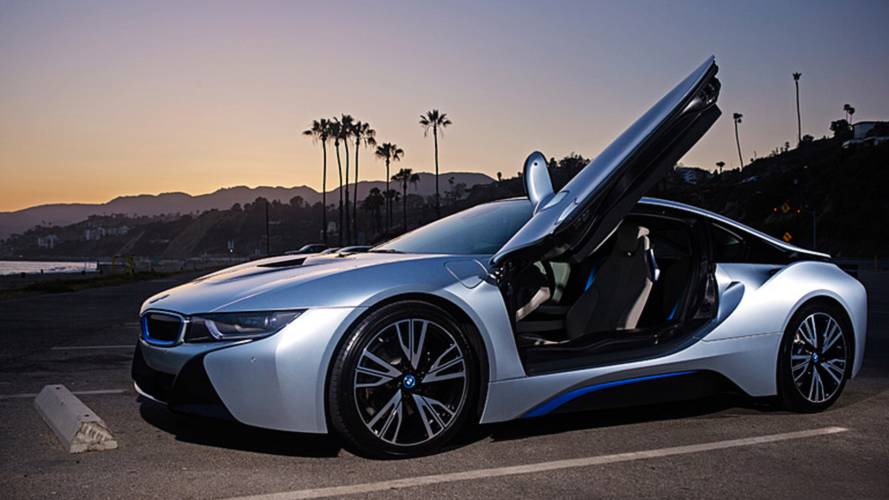 Meet the Laser Equipped Electric Car of the Future! The 2015 BMW i8 - GuzControlI get asked this question a lot: “Is that a Hybrid?”  No matter what...

I get asked this question a lot: “Is that a Hybrid?”  No matter what I drive, if it looks anything close to "futuristic"—meaning it has some swoopy lines or an odd-looking aerodynamic shape—I get asked the question or its slight variation like: “Is that an electric car?”  It never fails, especially if I’m driving somewhere where the population has a high kale consumption rate (I’m looking at you Santa Monica).

I’ve spent some time in electric, or electric(ish), cars recently—from the pretty amazing Cadillac ELR, to the workhorse Chevy Volt. I’ve also spent time sitting shotgun, schlepping across town in the new and super cute BMW i3 and fell in love with my personal favorites, the Volkswagen eGolf and the all electric Chevrolet Spark EV. Both are little four doors that drive like the world’s quickest golf carts and have more power and torque than should be allowed in such a small package (80’s TV wunderkind Webster excluded.)

But still to this day, nothing turns heads like the granddaddy of electric cars, the one ring to control them all—the Tesla Model S, which was launched way back in 2012.

Ah...2012. Let us reminisce, shall we? Housing prices in Los Angeles were astronomically crazy, Barack Obama was the president, and small plates ruled the day in restaurants across the country.

My, how times have changed but the Tesla Model S has not. It still is a pretty amazing car—all electric, with a nice long range and sheet metal lines like an Aston Martin Rapide S (or, in some people’s eyes, a Toyota Camry). They sold like funnel cakes at the Iowa State Fair and the rest was car history. Now, years later, the Model S is still the Model S, but with more optional power. However, it's more expensive and less exclusive and (in my opinion) it's getting a little long in the tooth, design-wise.

So, what’s an electric car lover to do when the bloom has come off the rose and all you're left with is an endless line of Tesla’s clogging the charging stations like thorns on the stem of a dead flower?  If there was an emoticon to express sadness, I would insert one now.

The cure to the exclusive malaise now comes in the form of the sexy as all get out BMW i8: A 2+2 gas-electric hybrid of such futuristic proportions there are lasers in the headlights. Seriously, lasers are in the headlights. LASERS!

The BMW i8 looks like something you’d see on the Disney backlot, just waiting to be driven by an Avenger. The design is all Teutonic madness with more creases and angles than a Russell Westbrook driving the lane. There is a kink here, followed by a slant there, followed by the BMW double kidney grille and some sweet rims, bro. It sits low to the ground, looks like the year 2060 and it drives like a panther stung by a million joules of power. The i8 is a techno marvel and is just as much fun to look at as it is to drive.

MUST SEE:  What People Think When You Drive the McLaren 650S and Why You Shouldn't Care | RideApart

BMW wrapped up the internals of the i8—the combustion engine and electric motor, the battery pack, all of the electronics and chassis components—in with the structural and crash elements into an aluminum package they call the Drive module that is then mated to the i8’s Life module—a carbon fiber, reinforced plastic passenger cell. These names! Oh, Barvaria!

The combustion engine, a reworked mill borrowed from Mini Cooper, is a 1.5-liter inline-3 cylinder that produces 228 horsepower and 236 lb-ft of torque that is mounted in the rear of the i8 and, through some Bavarian techno magic, operates with the front-mounted electric motor that powers the front axle. The electric motor adds 129 horsepower and BMW says it gets anywhere from 64 additional lb-ft to 369 additional lb-ft, depending on the gear selected and driving conditions. The total system output for the i8 is 357 horsepower and 420 lb-ft torque and making it comparable to the Porsche 911 specs.  Vroom!

We had the chance to spend some time driving the car around Los Angeles and deep into the heart of the i8’s target demo, Malibu yo! While stopping for a coffee at the Malibu Lumber Yard, all head’s turned, valets opened up spaces and gawkers asked numerous questions:"Yes, it’s a hybrid. Yes, it’s electric," I answered.

Both on the freeway and in the canyons, the i8 was a hellion. To wit: it has a 0-60 time of 4.2 seconds, a top speed 75 mph in all-electric mode and a glorious overall top speed of 155mph. There are numerous driving modes too—you can drive on electric power only, gas power only, and a few combinations of the two for a total of five driving modes all with different driving characteristics and dynamism.

Hitting freeway speeds in all electric is really a great feeling, but when gas and electric work in tandem, the i8 shines.  It’s a super-duper fun car to drive and it looks like nothing else. The only problem, due to the i8’s Life module, getting in and out of the car isn’t as easy as it should be. It took me some bending and folding and slowly sliding into the cockpit  (and I do hot yoga five days a week.)

The driving range may vary, but BMW is saying you’ll eek out 22 miles on pure electric power and a combined 310 miles in everyday driving conditions.  That sounds about right. We averaged above 40 miles to the gallon and when the battery power was low, it took about 30 minutes of, ahem, spirited driving to bring the charge back to full.

The whole package is ingenious and one would think quite expensive to produce, which justifies the $136,500 starting price. We can’t see how BMW is making much money on this car, but that’s not the point for BMW. It’s their halo car and halos cost money.

Dollars to cronuts, BMW has sold every i8 it could. Why? The i8 is hot, hot, hot and presents a compelling reason NOT to buy a freaking Tesla.  Who cares that it still burns some gas, the i8 makes a statement. It’s breathtaking to look at and way, way, way more fun to drive. Also, laser headlights. If there is one thing I’ve learned, it's to never underestimate the power of lasers to sway a buyer.