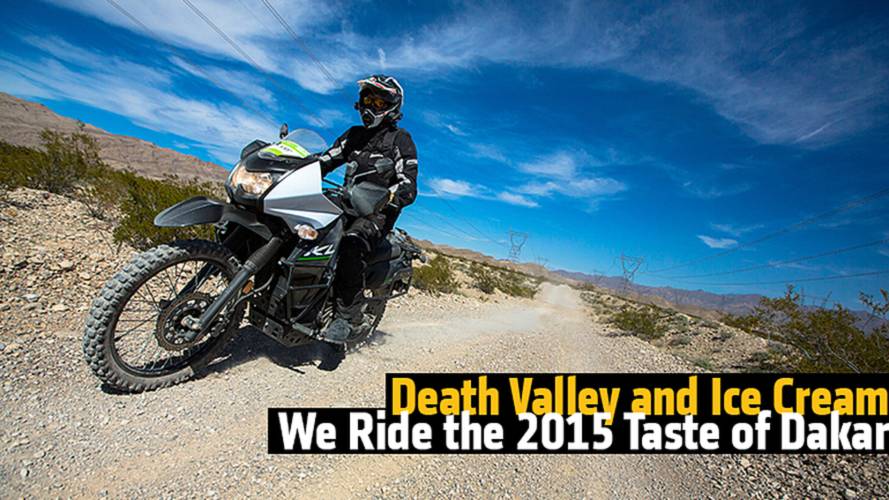 We ride the 2015 Taste of Dakar on a Kawasaki KLR…. oh that rhymes!

"It’s like the mule of the motorcycle world,” said Jim Downs with Motostella, shortly after arriving in the desolate desert town of Pahrump, Nevada. Located in the off skirts of Las Vegas and Death Valley with tiny casinos scattered between stop lights, Pahrump was far from the wooden terrain I grew up in.

“It won’t do anything sexy or all that crazy fun, but it’ll get you there,” concluded Jim with a snarky laugh.

READ MORE: How To Go Adventure Touring On A Budget

We were surrounded by big bikes. There was almost every KTM model available—from the smallest dirt bikes to the biggest 1190 Adventures loaded down with luggage. There were also big BMW GS’s strapped with gear, GPS and extra windshields, and a couple Yamaha Ténérés with equal aftermarket goodies.

In a town where your chip count determines if you were going home shirtless, I showed up to the table with what appeared to be a short stack. I was out of my element.

The Taste of Dakar, is just that—a taste of one of the world’s gnarliest road rallies. Luckily, it’s set up for riders’ of varying skill levels on almost any ADV bike.

Seattle-based company Altrider, makers of high quality gear for adventure bikes, got together to put on this event. Altrider makes saddle bags, covers, guards and everything essential for ADV bike survival in rough conditions. The Dakar rally is possibly the world's most intense rally, just making it alive from one end to another is an achievement. Knowing they, like so many others, won't ever make it the actual start line decided to instead bring it here. Enlisting the help of Dakar Rally podium finisher (the only American to ever place) Jimmy Lewis, they mapped out a route through Death Valley. This terrain is the closet to the actual Dakar rally that you can find on US soil. The Taste of Dakar is only one of many of the rides they do throughout the year.

My Taste of Dakar

At 1pm on Friday the 13th, I pulled into Kawasaki’s headquarters in Orange County, California, on our long-term Yamaha SR400 with four feet tall cargo strapped to the back. Aaron, a Kawasaki prep-man and friend, greeted me with a belly-full laugh and said, “Well, I’ve never seen straps used like that before.”

Using hand-me-down Harley-Davidson hookless, ratchet straps normally reserved for tying bikes to crates, I strapped my Sportz Xtreme-Pac tent, sleeping bag, chair, poles, underwear and deodorant to the back, along with my camera bag in front. All of this made a nice backrest for my four hour ride to Nevada. I opted against hard luggage because it would limit my abilities to split lanes leaving LA.

Immediately leaving the Kawasaki headquarters, I encountered strong cross winds that progressively got worse as the time ticked away. I was irritated, tired, late, and now dealing with cross winds that knocked my head back and forth for three hours. I was almost ready to be done with riding motorcycles for the weekend at that point.

I arrived into the campground as the sun was setting. My last staple into the ground for the tent marked the end of the day’s sun. That was also the time where I realized I left my headlamp and flashlight on my desk at home.

“Please make sure your GPS is figured out and give it to Mitch to get the proper route loaded in.”

Nope, don’t have one of those.

“These are self-guided tours, so make sure you know the people in your group and you have a group number.”

Nope, don’t have that either.

My anxiety for tomorrow’s ride was slowly increasing as dinner wound down.

I was to leave in the morning with photographer Alfonse Palaima, better known as Fonzie from MotoInsider, Andy Davidson, the British journalist from UK’s Motorcycle News, and Eric Hall, Senior Editor of XLADV—the big bike version to Thumper Talk an ADV Forum—and his friend Rich DeWolfe.

Start of the Ride

I grew up riding through abandoned construction lots, woods and creeks behind my house. Death Valley was a far cry from my North Carolina roots. So with my short stack of a bike, I bluffed my level of confidence at handling the California off-road terrain.

We began our Saturday ride on the highway out of town. The view was magnificent, with clear skies and mountains just within eye sight. Fonzie was stuck on a borrowed small-cc dirt bike that forced him to be pinned at 55mph. We rode for 20 minutes until our group pulled off by a random opening in the road-side fence.

We were riding on what was once was a fire road that now appeared to be more like two small walking paths beside each other. Made up of clay dirt and rocks, it had experienced frequent flooding that caused sharp ditches, scattered throughout the middle of our path, and making it difficult to choose the proper riding line.

Clicking along around 30-40mph, we came across heavily washed out areas every 1/4-mile. Our first one featured a steep 10-foot decline where we crossed a dried river bed and then headed up a steep 40-foot tall embankment to the other side. One at a time, we attempted our first major obstacle with Eric’s 1200 GS in front, sliding its tire across the big rocks and bouncing side to side as he gassed it up the hill.

Buckled down, knees into the tank, butt off the seat, elbows out, I throttled up the hill without a problem. So, this was the first 100 feet of today’s ride...

The Taste of Dakar is split up into three varying skill levels: Expert—complete with ridiculous rock passages, steep hills and plenty of sand; Intermediate—complete with tight trails off the beaten path; and Scenic—comprised mostly of dirt fire roads. We were on none of these routes.

Eric led us down a long gravel access road into a small community, and then through a soft sand-filled twisty path to some sand dunes. Fonzie snapped photos of us as we played through the sand for a few moments before heading onward towards lunch. Heading back out on the path we came, I was pitching the bike left and right like a flag in the wind as I skipped on top of the loose sand. Butt slid back on the seat and hands pulling back on the bars, I throttled out. I made it out alive through the dust trail of left by the BMW.

Our lunch stop was at a country HD-bar where the weekend warriors hung out. There were 30 big, burley sleeveless leather jacket clad bikers next to 30 ADV-clad storm troopers. We filled the bar, clacking our boots with every step across the wooden-planks that made up the old fashion floor—like modern horsemen passing through town…CONTINUE READING VIA LINK BELOW.

After lunch, we set out to Primm, Nevada, a tiny casino town (if you’d call it a town, it’s just two casinos and a couple truck stops) with taglines like “get even before heading home...”

We took fire roads and beaten gravel roads that zig-zagged around Hwy 15. I’d seen dust trails through the sky after leaving Vegas homeward bound towards LA. I always dreamed about what made them and wondered if I could ever be the couplet. Today that dust cloud was us.

We gassed up and headed to the North side of the Ivanpah Solar Electric Generating System, you know the gigantic bird-killer (they’re attracted to the light) on the side of Hwy15 as you leave California.

On our travel back, hitting loose gravel at highway speeds, we would unexpectedly encounter a washed out area, stab a handful of rear brake, then ride it out. “When in doubt, throttle out,” I’d shout to myself as I’d pulled up on the bars, leaned back on the seat and twisted the throttle.

We all made it out in record time, but while enjoying a bowl of ice cream back at the truck stop, we’d discovered the Brit’s BMW had a pinch flat in the front tire. Richard changed the tire within 20 minutes. He had everything he needed, including a stand, in his Klim book-bag tool kit, including a 21-inch inter tube. After the flat was fixed, it was back to the highway until we hit Vegas, then West into Lovell Canyon.

As we entered the canyon behind schedule, we met Jimmy Lewis—a Dakar podium finisher, Baja 1000 winner and the leader of the event (he held classes on Friday and Sunday during the weekend’s festivities)—and Altrider owner, Jeremy as they were heading back to camp. We would have to make it quick through the woods before sundown since it was 1.5 hours through the mountain before exiting close to our campsite. We went through the park, and then up and into red-dirt roads that led us to snow and a beautiful view of the mountains. The snow was accompanied by low temps that reminded me of how thankful I was for the Alpinestars ADV suit. Vented for the hot morning and closed for the cool evenings, it was perfect for any condition we encountered that day.

We stopped for a quick photo shoot and then headed back down to the other side. The remaining road was made up of loose gravel, and every long sweeping corner was accompanied by a hill. Like a roller coaster off the rails, we rode fast up and down, left and right, through the swooping woods until we were back out into desert territory.

That was the moment I realized it wasn’t me bluffing, but my Kawasaki. The unsuspecting KLR kept up with the fastest of the group without a single problem, moan or hiccup. I was never searching for the right gear, never had an issue with traction and made it through every trespass with ease. I found myself itching to rocket to the front at every opportunity. I showed my hand, and it was good enough to get me home with the shirt on my back... and my tent, camera gear, chair, sleeping bag.

Total, we saw around 200 miles, but that’s somewhat cheating since many miles were on asphalt.

All tours were self guided and everyone there was under the same like-minded attitude towards riding: just ride. No drama, no BS, no wining and no waiting—we just rode until we couldn't ride anymore. It was motorcycling in it’s purest form.