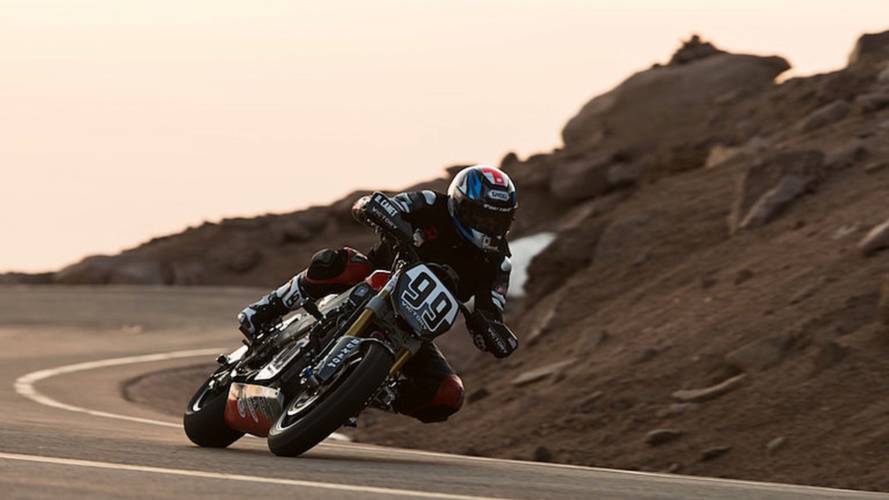 Victory motorcycles is in the final stages of preparing for this Sunday’s Pikes Peak International Hill Climb.

The Minnesota-based brand is bringing two bikes to compete at the iconic event: one electric, and one of the more traditional dino-juice variety. Victory has dubbed the match-up: “Thunder vs. Lightning.”

Victory’s electric Empulse RR will be raced up the mountain by Cycle World Road Test Editor Don Canet, whereas the fire-breathing Project 156 bike that Canet piloted for Victory last year will this year be ridden by former Pikes Peak Champion Jeremy Toye.

While the base frame and overall design of the Empulse RR is essentially the same as the production Empulse TT, a lighter monocoque carbon-fibre subframe is used. The battery, controller, and Parker Hannifin-sourced motor have been upgraded with repackaged battery cells offering more capacity. The engine also has new motor windings and an updated control system and wire harness. Visual differences from the IOMTT version raced last year include less bodywork, a more upright riding position and the addition of hand guards to protect Canet’s hands from the cold mountain air.

“The Empulse RR has a couple of things going for it that are going to make it hard to beat, owing to its all-electric powertrain,” said Brian Wismann, Victory Racing team manager. “Does this make the Empulse RR the clear favourite? Not necessarily. Batteries are negatively affected by cold temperatures and there’s no place to charge on the mountain, meaning any misstep in logistics or setup will cost Don the time he needs to get up to speed.”

Canet, though, says he’s looking forward to the challenge and likes his chances of out-racing Toye.

“I jumped at the idea,” Canet said. “We all know thunder follows lightning, and it’ll be no different at this venue. Toye is going to have a heck of a job cut out for himself in trying to beat me to the top.”

Meanwhile, seasoned racer Toye –– who has also raced at the Isle of Man TT and Macau GP, among others –– will be behind the ‘bars of a bike that has had a year to work out the kinks that resulted in a 2015 DNF. Victory Product Manager Brandon Kraemer concedes that the brand is excited about the race, regardless of which of its bikes manages a better time.

“Whichever platform takes top honours, the winner is the Victory rider of the future who will be enjoying the same technology on their future street motorcycles someday,” he said.

The 94th running of the Broadmoor Pikes Peak International Hill Climb takes place Sunday 26 June. The race is run on a 12.42-mile course with 156 turns that begins at 9,390 feet and finishes at the 14,115 foot summit of Pikes Peak. As drivers/riders climb toward the summit, the thin air can rob internal combustion engines of 30 percent of their power.