The Day I Fell Out of Love with the Road 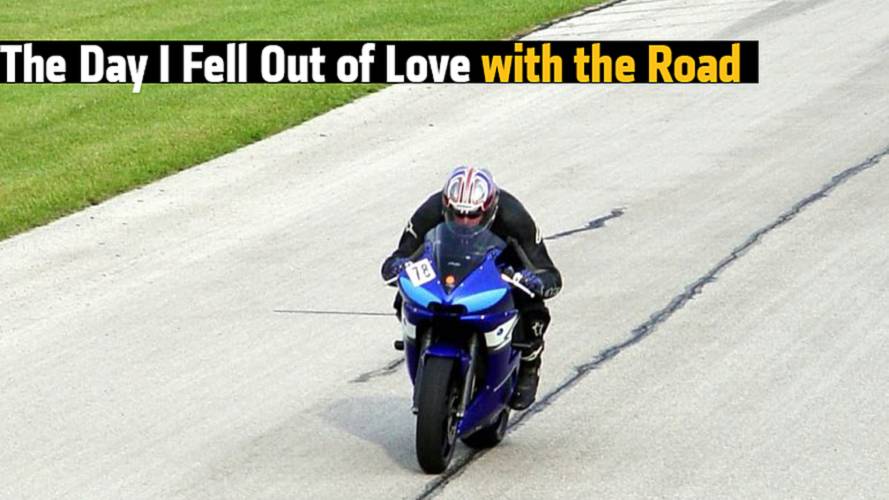 I remember every detail of that day, even ten years on.

It was warm, but overcast; the kind of day that makes the rolling green countryside fade to a grayscale. I was riding with my normal crew, a group of experienced sport riders from Cincinnati and Northern Kentucky, as we snaked through the familiar, twisty roads that made up our usual Sunday loop.

MUST READ:  The 10 Track Day Questions Everyone Asks | RideApart

Riding with these old heads had considerably improved my riding. It was the right atmosphere for a newbie: there was no pressure to go fast, no encouragement to push your limits. There was calm discussion of technique, and an emphasis on properly maintained equipment and safety gear. The whole group waited at every stop sign and intersection to let the slower riders catch up.

This was never an easy ride for me. Starting from my house, it was over an hour's ride just to get to the gas station where we all met up. There, I would buy a pack of cigarettes and a Red Bull, my fuel for the morning's escapades. Soon there were a dozen or more motorcycles lined up against the edge of the lot. Greetings were exchanged, and then the thumbing of starters and donning of helmets signaled the start of play time.

Well, for the more experienced riders it was play time. For me, it was a herculean effort of concentration, willpower, and what little skill I had. I came to motorcycling relatively late in life, only throwing a leg over for the first time at the age of 19. Most of the people I was riding with had been doing so since childhood, and had a depth and breadth of experience I could only imagine. While I was a student of the sport, devouring every book and magazine article I could find on riding theory and technique, I have never been a natural rider. I had to work very hard to stay smooth, to maintain good body position, to figure out the visual skills needed to read the road, navigate blind corners, and watch for pavement imperfections, gravel, traffic and wildlife.

If all of that sounds more like stress than fun to you, you aren't far off the truth. I was having fun, but it was a very serious sort of fun. The roads in Northern Kentucky are among the most challenging in the country, and only riding them once every week or two meant that I was cramming a whole lot of lessons into a very small amount of mental space.

Still, most of the time I did well enough. I rode mostly within my limits, tried my best to ignore the urge to try and keep up, and most crucially, didn't crash. As the weeks wore on, my confidence improved, and I began to recognize sections of the road enough to relax a little. But only a little. Most of the time, I was riding tight, white-knuckled under my gloves, barely breathing except on the rare occasion that the road straightened out.

On that cloudy Sunday morning, I was even tighter than usual. Even the sections of road I recognized left me stymied. I was blowing apexes, braking too deep, and generally riding like I'd never been on a motorcycle before. One of the more experienced riders, John, had noticed my problems and took up position behind me to watch what I was doing. A few miles later, he passed me and motioned for me to follow his lines. John was a natural rider, all smoothness and intuition, and his sliver ZX6 arced gracefully through the curves ahead of me. John would go through a corner, then sit sideways on his seat before he was quite out of it, looking back at me to see how I was doing. How he was able to do that, while carrying what I thought was an incredible amount of corner speed and lean angle, seemed otherworldly, to me….

After a few more missed apexes and blown corner entries, we arrived at our traditional rest stop, a dilapidated Five-and-Dime in the middle of nowhere. I pulled off my helmet, lit a cigarette and stared at the patchy, gravel strewn pavement of the parking lot, wondering what the hell my problem was. I had well and truly scared myself a half mile back, coming into a corner way too hot, and panic braking almost to a stop before running off into a gravel driveway. If that driveway hadn't been there, I'd have tumbled into a ditch.

"Yeah," I lied, "I just can't seem to do anything right today. Can't get in a rhythm. I don't know what my problem is."

"Have you ever done a track day?"

I had been asked before, but always shrugged it off. I told myself that I had nothing like enough experience to take my bike out on a race track. If I was having this much trouble on the road, how could I ever hope to ride on a track? I recited these objections to John.

"I think it might help you to get on the track," he said. "I have a buddy who canceled on me for a day at Putnam Park in a few weeks. I'll sell his spot to you for cheap. You should come out."

I said I'd think about it, got his email address, and flicked my cigarette butt into the gravel.

A few weeks later, on a scorching, humid late September day, I had my track baptism at Putnam Park in rural Indiana. It was nothing like I thought it would be, and a hundred times better. The controlled conditions, the repetition of the same corners over and over, the freedom to ride as hard or as easy as I felt, to explore the limits of myself and my machine... It was perfect. I gained more knowledge and skill in that one day than I had in the whole previous summer of white-knuckling it on the Kentucky roads.

It would be another few years before I took my bike off the street for good, selling the lights and bodywork and removing the kickstand, replacing them with fiberglass race kit. But after that track day, it was never the same again. Instead of enjoying the hypnotic ribbons of asphalt that wound on for endless, twisty miles, I was fixated on the cracked pavement, the mailboxes, the dogs at the side of the road. I eyed every oncoming car warily, and fumed at the farm equipment that made a rolling road block ahead of us. I was out of love with the road, with its hazards and dangers and unknowns. I had discovered the track, that distilled, pure, carefree form of sport riding that allows a rider to truly experience their machine.

I've been back on the road since, on borrowed bikes here and there. I still tell myself that when the right bike comes along, I'll get back to riding on the street again. And I might. But I'll never love it the way I once did, when my bike was stock and I was a new rider, and the road held such mystery and possibility.

MUST READ: How To: Not be a Noob at a Track Day | RideApart