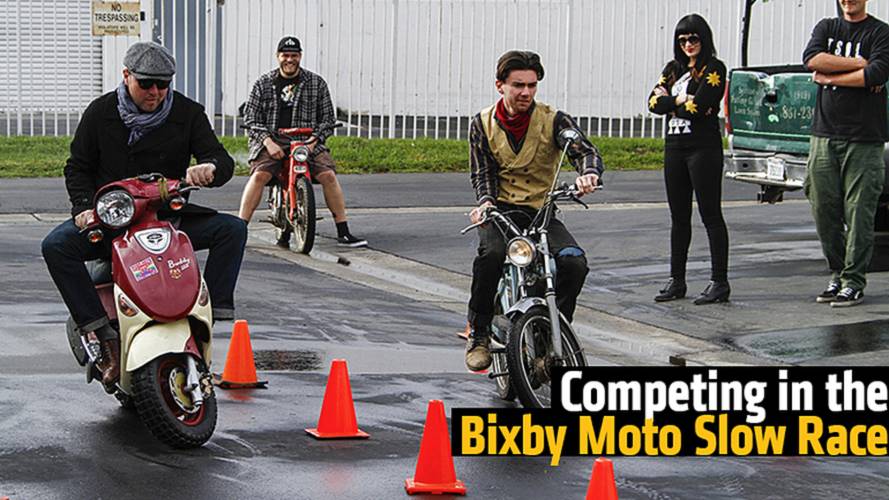 Competing in the Bixby Moto Slow RaceYou can’t win at a track day, right? But do you have fun? Hell yes. So, while I didn’t win the Slow Race, I had...

You can’t win at a track day, right? But do you have fun? Hell yes. So, while I didn’t win the Slow Race, I had more fun than I’ve had at some track days.

With keys to our long term Kawasaki KLR and nothing to do on a Saturday afternoon I ventured to Bixby Moto for their Slow Race event.

This insane group of motorcycle and scooter mechanics whom I’d only seen via their over-the-top YouTube videos hold games behind their scooter shop in Fountain Valley, California. Today’s race started in the afternoon with a homemade metal sculpture trophy awarded to the winner.

My family was in town visiting for the holidays and I convinced them to ride out in the mini van while I rode our long-term Kawasaki KLR 650 for the race. Free pizza and beer, so they’d be entertained while I competed.

With a 35-inch seat height and 432 pound curb weight, the KLR was far from a serious competitor for the days’ race... or at least I thought so. It’s only too heavy, too tall and too aggressive for a slow race, but it turned out to be nearly perfect.

People tell me my dad is shorter than me. I say that because I don’t see it. To me, he’s still a giant of a man, towering over me, always humbling my attitude, temper and riding skill. He’s the one who taught me how to ride and passed on the love of motorcycles to me at a young age. I’m 6’2” so the KLR is great for my build and riding style, like a tame SuperMoto.

I had plans for a big road trip, just the two of us up Highway 1, but dad had surgery and was unable to ride, so we postponed our trip. I acquired a Harley-Davidson for him, as I didn’t think the KLR was much of his style.

After my first practice pass, my dad met me at the other end. Late-model, bodied scooters, vintage step-throughs, dirt bikes and street bikes were zipping past us, sliding tires, popping wheelies and smiling through thin clouds of burning 2-stroke oil. He waved me over, grabbed my shoulder and simply said, “get off.”

Like stepping back into the halls of my school, my dad mounted the bike ignoring any soreness and pain he might have felt and taught me how to ride all over again.

His first practice run, he knocked out a scooter. Makes a lap around the tiny industrial park behind Bixby Moto’s shop, and then right back into line. Up against head honcho at Bixby Moto, Drew, on his famous red, white and blue Kawasaki W650. Kawasaki vs. Kawasaki, 650 vs. 650, dad knocked him out before the third cone. Both laughing along the way.

That was fun to watch and while this was the extend of the day’s success, we had a blast. We switched back and forth throughout the day, kicking ass in practice and then failing miserably during the actual competition. Stage freight runs in the family.

Follow Bixby Moto if you live in LA to see any upcoming shop parties like this one.