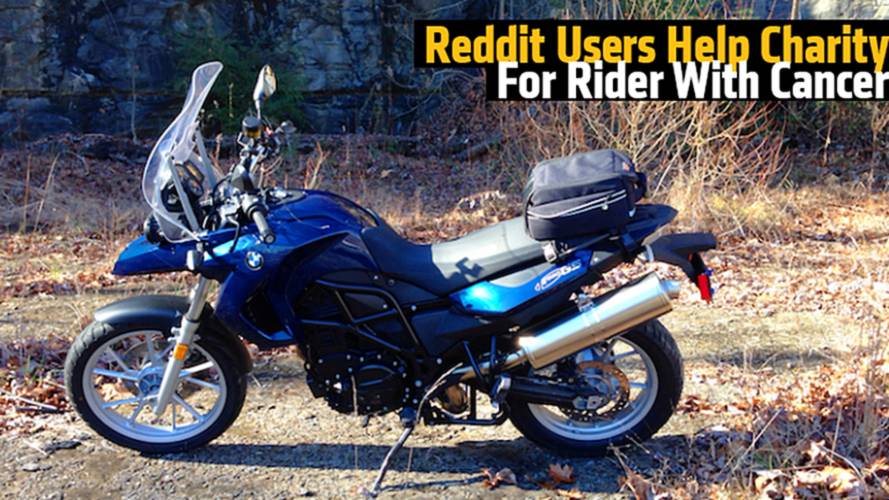 The internet helps donate Reddit user and cancer patient Jerri-blank's charity of choice. Click here to help the cause.

Life is short. It’s cruel. Unforgiving. Mysterious. It can anger you when it isn’t fair and amaze you when it is. There is no denying the privilege we have to experience life—to meet people, to love and cry, to sneak out of our parents house when we are 16 and to simply get on a bike and ride. Our time here is but a blip in the universal timeline that will long outlast any of us. We won’t be remembered. There will be no schools built in our memory. No streets bearing our last name.

However, while we may be forgotten to history, we have each other here, now. And we matter most to those in our lives. Differences may often divide us, but we have a community as motorcyclists—we stand shoulder-to-shoulder when need be and on Reddit, users are standing up for user jerri-blank.

I will let jerri-blank tell her story. She writes:

“About two years ago, I was diagnosed with metastatic breast cancer. After six months of chemo and surgery, I was in remission and feeling like life was (literally) too short to put off becoming a motorcyclist, so I bought a bike. I have been riding since late 2013 and really enjoying it, having been talked out of it my whole life (I am 48).

“This past weekend brought devastating news - the cancer has migrated to my brain. I have had some mild seizures. I started whole-brain radiation yesterday, and my abilities will eventually be compromised by the treatment, assuming it is even successful. While the side effects aren't immediate, once they come they are permanent.

“I am trying to make peace with the probability that it will not be safe for me to ride when I come out of this on the other side. It makes me sad. Still, I am glad I did it while I could. I would really regret not having done it.”

Ideas were thrown around about how best to help jerri-blank and Reddit user Rock3tPunch suggested writing her name on his bike. This gave Reddit watsyurface the idea to print stickers of jerri-blank’s user name, sending the stickers to those who wanted one or two, and donating the remaining money (minus shipping) to the charity of jerri-blank’s choice.

Jerri gave her blessing, suggesting the Breast Cancer Research Center as the charity of choice. You can buy a sticker here for $1 and we hope you’d do so. It’s a good cause and a harsh reminder that none of us will be riding forever. We wish jerri-blank the quickest of recoveries and many miles of riding ahead of her.

Our differences often divide us, but this life, the world we call home—we’re in this together. The internet is known to be a cruel, unforgiving place, yet, it often still amazes.