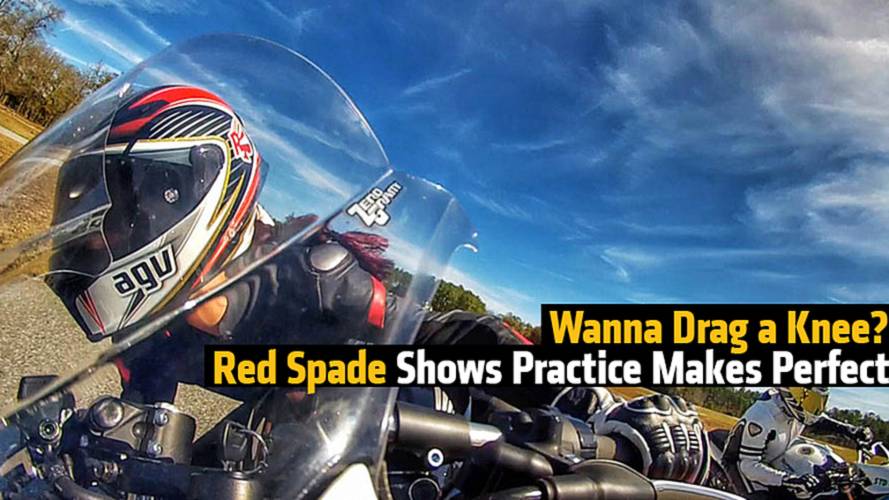 I first encountered Red Spade and her infectious energy for motorcycles on Instagram. Social media has truly enlarged the motorcycling community for many people by making the world larger and more connected. It makes it easier to meet like-minded people and form a community with them. Personally, I’m a gear and safety nut. I like people who like to ride safely on the street and stay geared up, and I liked people who like to work on their skill sets. So naturally, I gravitated towards her. Red Spade maintains an Instagram profile that she uses as a motorcycle and photography blog. She has quite the eye for photography and a flare for graphic design, which is one reason she’s been such a hit with social media. But she also has utilized social media to document her trials and tribulations in motorcycling since she began riding.  From Sunday afternoon adventures to track days to maintenance logs, she tries to capture it all. If you’ve never seen her photos, here’s an idea:

A few weeks ago, she hit one of the milestones that many motorcyclists dream about: dragging a knee on the track.

Now what you need to realize is that Red - a nickname she was given for her once bright red hair - also has the same constraints that most of us do: She’s got a regular day job, so all of her photographing and motorcycling happen when she’s got free time. And while many riders might perceive that knee dragging can only happen after many years of track riding, it’s also quite remarkable that she only recently hit her third year anniversary of riding. So how did she do this, and how can you?

Riding two up can have infectious need-for-speed results

Red has had a fascination with motorcycles for a long time. She used to ride pillion on her husband’s 1997 Honda Blackbird CB1100XX. After a trip to the Tail of the Dragon, she finally got the bug.

“We pushed the bird so far that she had scraped up the fairings on one particularly sharp bend,” Red said, “it wasn’t until we took that trip that I realized I wanted more.”

Around the same time, she went to a race track for the first time to photograph a friend’s WERA race for fun. "It was unlike anything I had experienced before. You could feel the amazing energy and the camaraderie between the riders.”

She decided to pursue her motorcycle license. It was notably a challenge for her, as she continuously battled neuropathy, a nerve condition that causes severe shooting pain from her knees to her feet. Her determination to learn, however, overcame the pain she experienced throughout her class, and within two weeks after passing the exam, she purchased a 2011 Honda CBR250. She rode the bike nonstop for the first year and got her first taste of track riding when she rode pillion on a friend’s bike.

“He took me on the ride of my life, dragging his knees and going faster than I ever did on my own. Needless to say I was utterly hooked.”

So after a year on the street with her 250, she moved up to a 2008 Honda CBR600RR. However, when her husband decided to turn his latest motorcycle purchase into a track bike and use his Blackbird exclusively for the street, Red decided to do the same.

Trying to learn body positioning at her first track day

She’d never forgotten the energy of the track, and she wanted to be apart of it.

Despite not being a perfect rider on day one, she did find the thrill that she was looking for, “I remember it being mentally the hardest thing I’d done in a very long time. At the same time it was the most calming zen like experience ever—pure therapy.”

After two days of joy, she developed some clarity, “I realized just how much there is to learn. I learned more in 2 days there than I had on the street the first year of riding—that was a big eye opener.” With that, Red was hooked.

After a track day at Mid-Ohio, she’d come up with a solid goal, “Because I was on a 250, I obviously got passed on any straights. However, in the turns, I technically should’ve been able to be just as fast. So that became my goal for the entire year—to be able to get up to the speed of the bigger bikes and keep up in the turns.”

“I was very fortunate to have Ryan Haddock take me under his wing and show me some great race lines. He got me to start really having fun.” Additionally, she started experimenting with dirt riding. “I had the most amazing opportunity to be trained by Shelina Moreda at one of her dirt camps. That experience was very special in itself because it focused on a lot of my trouble areas.”

MUST READ:  The Choice is Yours: Sweat or Bleed | RideApart

As she progressed to other tracks, she also began to realize her set-up preferences for her CBR250 were evolving. A weekend at Road Atlanta was particularly enlightening, “I was having issues with body position—I couldn’t get down low enough on the tank or to kiss my mirror. The stock pegs were in such a position that it forced me to sit upright and my feet were too far forward. I was scraping the pegs which was unnerving. I was still skittish and would slow down too much entering a turn, thus killing my speed.”

Despite this, she refused to give up on the bike, “I talked to many racers about it, and they all assured me that it was the best way to learn. It’s extremely forgiving when you mess up.”

So she began to modify the bike to make it more comfortable for her, “I installed Woodcraft clips which allowed me to get into a more aggressive position. Then I installed rearsets and race grip pegs which is what really changed my body position and finally allowed me to drag my knees. I considered adjusting the front shocks to make them stiffer, however, I’ve still held off on that because the bike felt really good on my last track day. I’ve been playing with different tire pressure and that’s also made a significant difference for the better.”

So how did she finally get her knee down? She’d been posting for her last few track days that it was a goal that she wanted, but on the weekend that it happened she was having difficulties.

“I actually finally gave up my last track day. My neuropathy was kicking my ass the previous day and I had reached my physical abilities. It was a very sad moment for me, but I resolved myself to just have fun and focus on technique the next day. In that moment I truly became free of the stress that I had put on myself by imposing such a silly goal. I was having pure fun chasing some guys in my own class on smaller bikes.” Then finally, she felt it happen.

“I was so overjoyed and excited I screamed the entire lap. After I did it, I was able to do it again and again on many of the turns. It actually made me feel more confident. It was exhilarating and primal, pure unbridled joy.”

Here's the video of the day:

So How Can You Do It?

The keys to Red Spade’s success are practice, proper instruction, and perseverance. She told me that she’d focus on one aspect of riding at a time, and continually would seek advice after conquering one after the other. It probably also didn’t hurt that Red spent every possible minute riding the mountains and perfecting technique with her CBR600RR. If you're interested in getting more education and working on your skills, you can check out how to get started and even a list of schools in this article.

MUST READ:  The 10 Track Day Questions Everyone Asks | RideApart