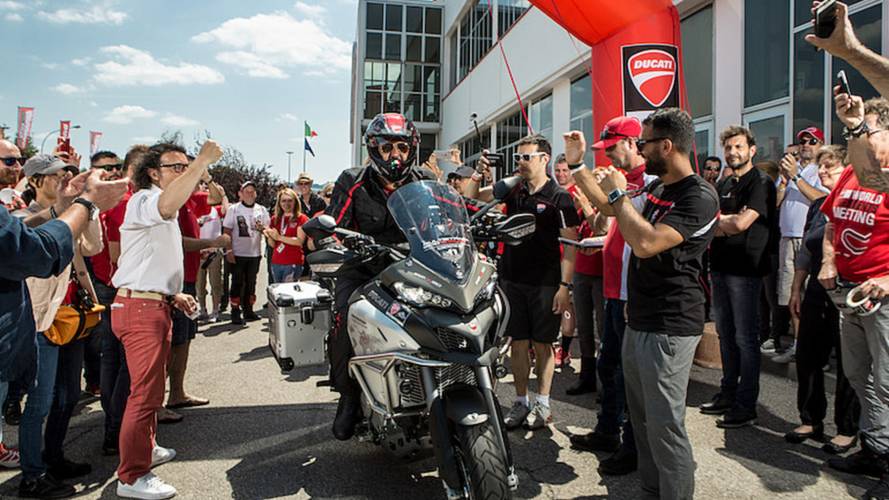 Ducati Birthday Celebrations Continue With World TourHot on the heels of a successful World Ducati Week, the Italian brand is continuing its 90th...

Hot on the heels of a successful World Ducati Week, the Italian brand is continuing its 90th birthday celebrations with the “Globetrotter 90” event that will see a Multistrada 1200 Enduro ridden roughly 30,000 kilometers (18,641 miles).

As Ducati employees cut the birthday cake, they also bid farewell to the first of seven riders that will pilot a Multistrada 1200 Enduro for the Globetrotter 90 event. The Globetrotter 90 is a trip around the world for seven motorcyclists who were selected from more than 3,000 applications. Their journey will retrace the streets and places where the most important pages of the first 90 years of Ducati history have been written.

The first Globetrotter is Vir Nakai, a 37-year-old from India. He will ride toward Moscow, where on 29 July he will pass the baton to the second traveller.

To send-off the first rider/torch-bearer in Borgo Panigale, some 160 representatives from various Desmo Owners Clubs representing 40 nations were in attendance.

Ducati says the Globetrotter 90 is a strongly symbolic moment for the company, with the “torch” that Nakai will be carrying “meant to be the symbol of Ducati passion, ready to cross the five continents and bring a positive and enthusiastic message.”