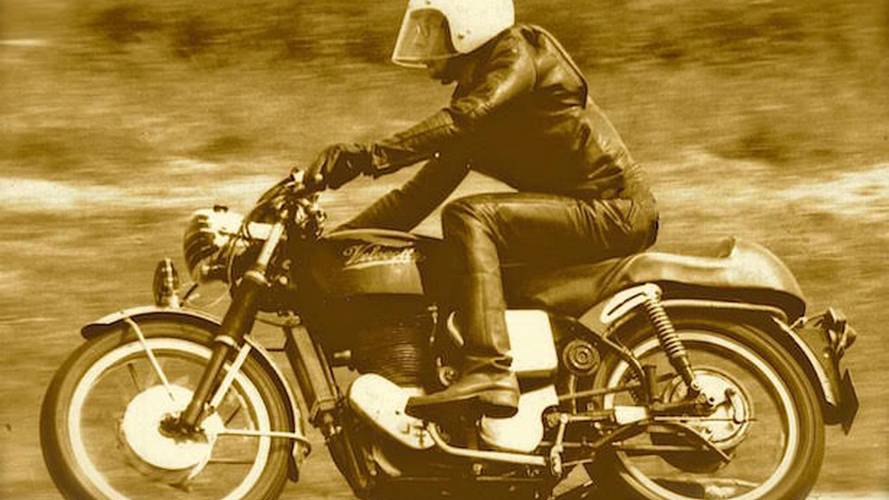 Twilight Ramble: Rafferty Remembers Velocette(First a note on the title of this column – Twilight Ramble. It implies an author of considerable...

(First a note on the title of this column – Twilight Ramble. It implies an author of considerable age, someone in "the twilight of his years" who still enjoys the odd ramble, an occasional scramble, short track, road or trail ride. A person who typifies that well-worn aphorism, "You don't stop riding because you get old. You get old because you stop riding.")

Like most riders, I spend a lot of time in the garage. Not because I can't afford a good mechanic (which I can't), or because I like to modify motorcycles or even pretend to enjoy maintaining them, which is why I can't call it a shop. No, for me the garage is the home of peace and solace, the refuge from the crazed world of commerce. The garage has a good stereo, a refrigerator always stocked with good beer, a small electronic piano keyboard, and a Micro Cube guitar amp in case anyone who can really play stops by. Also, it was in the garage that I wrote "Stairway to Heaven" back in '59.

I've found few reasons to leave the garage (dinner, sleep, "Ray Donovan" or "Shameless" on Showtime), but obviously the best motive is to take a ride. And while having a destination is largely unnecessary, the prospect of a good one is just hot fudge on the chocolate brownie à la mode. Which, in this case, was the North American Velocette Rally in Cambria, California – for me just a 50-mile ride up the coast.

Jim Romain's 1937 KTS is powered by a 350cc overhead cam engine. The touring model combines features of the KSS and MSS versions, with full fenders and 19-inch front wheel.

My fondness for Velos goes back a good ways, to when a '67 Thruxton provided my entry to road racing at Nelson Ledges in 1970. Veloce Ltd. was founded in Birmingham, England, in 1905 by German immigrant Johannes Gutjemann, who later anglicized his name to John Goodman. The family firm, in business until 1971, was a pioneer in two-stroke engine development, the first to build a reliable positive-stop foot shift mechanism, and against much larger manufacturers, won the 350cc World Championship in 1959 and '60. And more than a few titles at the Isle of Man. In 1961 the 500cc Venom set the world record at 100 mph for 24 hours at the Montilhéry track in France. The Goodman family inscribed some good credentials in production racing.

This 1949 KTT graced the lawn at the Quail Motorcycle Gathering in May. The factory racer, which once won the Dutch TT, is owned by Paul d'Orleans, aka the Vintagent.

The North American Velocette Club schedules their annual meet in locales featuring enough good roads, in some proximity, to host 1000 miles of riding over five days. Cambria, on California's central coast, fits the profile with plenty of wine country back roads, high desert plains and scenic canyons. The region has a patchwork of microclimates, and temperatures can climb 50 degrees in 20 miles. Common to most vintage motorcycle groups, the Velo club members spend a good deal of time tinkering with the bikes.

Pete Young (left) and Steve Huntzinger sort out some fuel delivery issues on Young's 1913 Veloce 3.5-hp single. The veteran of the Pioneer Run from London to Brighton and the Irish National Rally, has direct belt drive, no gears or clutch, and must be bump-started at every stop.

Veteran vintage collector/fabricator/racer Fred Mork of Berkeley, California, rode his 1967 Velocette Venom in the rally. A respected source of information and advice on the care and fettling of classic bikes, Mork equipped the machine with cylinder head and exhaust temperature gauges.

"You have take some care with these engines," he said. "But they're quite durable when ridden properly, and kept in the right rpm range."

Mork also brought his 1939 Matchless X model, a 1000cc V-twin, which he acquired at the Mecum Auction in Las Vegas two years ago. After resolving issues with timing, refreshing the cylinders and a three-angle valve job, he found it roadworthy. "I think it's reliable," he said.

Fifty-some vintage motorcycles were gathered in the parking lot of the Cambria Pines Lodge, covering four decades of Velocette production. While some were obviously the products of considerable restoration, others carried their originality and proper patina of age and road wear. But all were riders as opposed to museum pieces, in common with most of their owners.

One that stood out among the road models was a tidy little roadracer built by Gary Roper of Medford, Oregon. The circa-1951 350cc MAC had been an incomplete basket case with "a very crooked frame." With the help of Washington's Ed Gilkison, Roper rebuilt the engine, made up controls and rear sets to match his height, and did the final plating and painting. When partner Dave Roper (who may or may not be a long lost cousin) gave the bike its first AHRMA race win at Utah's Miller Raceway against 500cc bikes, the mini-MAC was proved a winner.

"I was racing a friend's T-20 Suzuki at Portland in 2010 and having problems with it. While I was working on it, a fellow approached and said he was building a race bike and maybe I'd like to ride it sometime," said David Roper. "I was very distracted and said 'sure', but later forgot about it.

"A while later, I got an email from Gary Roper reminding me of the conversation, and I was a little leery as he had never been involved in racing before. But he was very experienced in bike mechanics and included a photo of the bike, which was gorgeous.  So, he brought the bike to Miller Motorsports Park and we had to do a little prep to make it track ready, but it worked great right off the bat. It's a very elemental bike with initially no instruments and, of course, no rear suspension.

"Eventually I convinced Gary that a tach would be useful to gear the bike for different tracks. We've raced it at Willow Springs and Sears Point, in addition to Miller. Being only a 350 in a 500 class, it struggles at a fast track like Willow, but can hold its own at Miller and is killer at Sears. Gary had to re-enforce the gearbox mounting and has worked with Karl Engellener on the tuning, lengthening the intake tract.

"The bike is light and has unlimited ground clearance. The much maligned Velo clutch works great as does the gearbox. It's a hoot to ride and Gary keeps it immaculate. He and I don't know how we are related as he doesn't know too much about his genealogy, but I adhere to the Wandering Gene Theory, and it's clear to me that we've both inherited some of the inventor of the motorcycle, Sylvester Roper's genes."

Gary Roper is also setting up a 1926 Indian Scout for vintage racing, while he and cousin Dave are considering bumping the MAC up to the class maximum of 500cc. The results will be revealed at the AHRMA race on Labor Day weekend in Tooele, Utah. More about that on a later date.

Bicycle shocks provide the rear suspension. Oil tank moved to the left to make room for the intake tract, which puts the bell mouth 13 inches from the valve face, good for a bump of 6 hp. Larger carb has a 380 main jet, opposed to the original 190.

Kim Young, wife of Pete and mother of son Atticus and daughter Sirisvati, has often carried one or the other offspring as passenger on her 1930 Velocette KSS. The 350cc model has completed about 10 club rallies in the western United States and Canada. Now and again, when she can't make an event, Pete is permitted use of the KSS and enjoys the opportunity to wear his Sherlock Holmes helmet.

Pete rode Kim's bike a few years ago at Steve Wright's Pre-16 Ride (the rules are flexible). This portrait was taken behind the lunch stop at the Pozo Saloon.

Kim hustles the KSS down the road. The racing version of the 350 collected several titles at the Isle of Man.

The Youngs are not a Velocette-only family by any means. Her first British bike was an Ariel Red Hunter, purchased as a basket case in 1998. Ten years later they restored it a second time for the Legends of the Motorcycle show in Half Moon Bay. This 1936 model is the Gentleman's (or Woman's) Express version of the Red Hunter 500cc single, with high pipes, speedo and oil pressure gauges in the tank, and shiny bits hither and yon..

Kim poses for the obligatory beauty shot at the Velocette Rally. She won Best British award.

For more information on the North American Velocette club, go to www.Velocette.org

Revival Cycles of Austin, Texas, won the Quail's Design and Style award with this cafe racer. The 1960 Venom engine is housed in a period Rickman Metisse chassis.

Oil tank has been relocated on the left of the 350. Cutaway primary cover incorporates the sprocket/chain guard.

John Laughney's 1962 Venom Clubman is such a family member that it lives in the family room of his Templeton, California, estate. Its numbers indicate an example prepared by Geoff Dodkin, prominent racing tuner of the 60s and 70s.