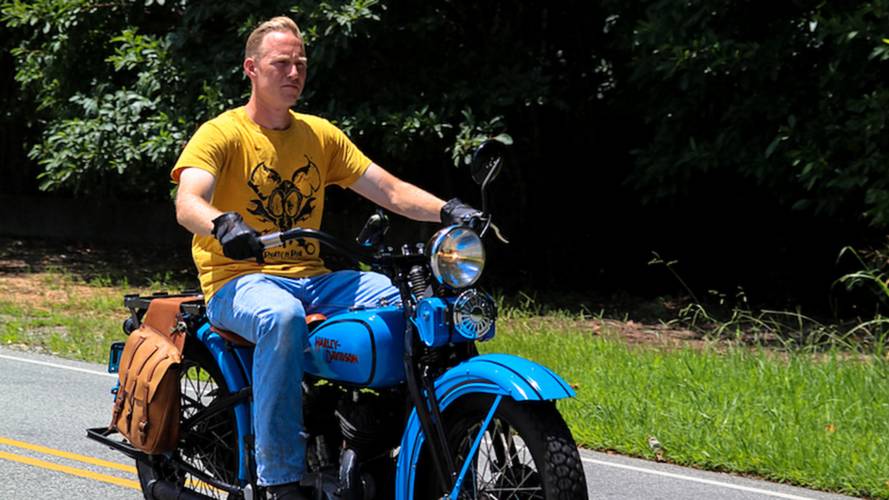 How to Ride an Antique Harley-DavidsonWhen you ride a more than 80-year-old motorcycle, people tend to ask you a lot of questions. Outside of a...

When you ride a more than 80-year-old motorcycle, people tend to ask you a lot of questions.

Outside of a motorcycle museum, the chances of seeing one actually on the road are pretty slim, so it is no wonder that my old flathead turns a few heads every time I take it out. After riding coast to coast on an antique Harley and answering more questions than I care to remember, I can tell you the main thing everyone wanted to know was: "How do you ride that thing?"

Before I get into the actual ins and outs of riding an old Harley, let me take a minute to cover the basic mechanical design of my particular machine. Built in 1933, my motorcycle was part of a new line from Harley-Davidson known as the V-series which first rolled out of Milwaukee in 1930 and was produced until 1936.

They were mostly powered by a newly designed 74ci sidevalve V-twin engine (80ci engines were available later) which, unlike modern motorcycle engines, had the valves fitted in the cylinders instead of the heads. The engine is mated to a hand-shifted three-speed transmission through a foot operated multi-plate clutch. A beefy I-beam springer handles the suspension up front and the seat is mounted on a spring-loaded "pogo" to make up for the lack of rear suspension. Front and rear manual drum brakes eventually bring the bike to a stop and drop center rims allow for the mounting of modern beaded tires. Even though the engine design has more in common with a tractor than a modern motorcycle, these machines were actually capable of speeds more than 100 mph.

1933 was Harley-Davidson's lowest production year due to the Great Depression. Only 3,700 total motorcycles were built that year.

Probably the biggest difference between the V-series and every Harley built since 1936 is the lack of recirculating oil. On these engines, the oil goes from the oil tank to the crankcase, then into the primary and finally onto the rear chain. Ultimately all the oil ends up on the ground, but you do always have fresh oil circulating through the engine, which isn't too bad when you think about it.

To give you an idea of just how much oil it takes, I used 15 quarts on my 3,650-mile cross-country ride.  Contrary to popular belief, the engine has two mechanical oil pumps, so you don't have to manually pump oil while riding. It does have a hand pump located on the left side tank, but this is used to fill the crankcase after you change the oil. For best performance and minimal smoking, just 3-4 ounces of oil is all the engine needs.

The procedure for cranking up an old Harley is a lot more involved than a modern motorcycle, but when the engine starts it is definitely more satisfying. First things first, you have to turn on the gas. My VL actually has three separate tanks and two fuel petcocks. The right half of the tank is the main fuel tank and its own petcock to turn the fuel on and off. The left half of the tank is split, holding oil in the front and a small reserve of gas in the rear which is controlled by a second petcock.

Note how close the petcock is to the unshielded spark plug. I've inadvertently tested my ignition system multiple times while trying to find the petcock while riding.

Once the petcock is open and fuel is running down to the carburetor, you need to prime the engine to get fuel into the cylinders. This is accomplished by twisting the right hand grip until the throttle is wide open, closing the choke and kicking the engine over two times. When starting a warm engine, priming is not necessary and if you do prime it, you will just flood the engine. This results in a lot more kicking as first you have to clear all the fuel out of the cylinders before you can begin the starting procedure. You can count on this to happen anytime there is a crowd watching you start your motorcycle.

Once the engine is primed, you are ready to fire it up. Just like a modern motorcycle, you first turn on the ignition key.  To further complicate things, my VL has two keys, one for the ignition and one for the lights.

The ignition is controlled by the left switch and the lights by the right. An amp meter and light round out the dash.

A quarter twist of the left grip retards the timing which makes the engine easier to start and lessens the chance of the kicker pedal "kicking back" and possibly injuring your foot. I found out the hard way that you should always wear boots after I ended up at the local Urgent Care due to a unusually hard kick back.

Twisting the left grip actually rotates the timer which is very similar to rotating the distributor on an automotive engine. With the choke reset to one notch below fully opened and the throttle slightly open, a properly tuned machine should only take one or two additional kicks to fire up the engine.

On a low compression engine like my VL, you can easily kick the engine over while straddling the motorcycle. Higher compression engines often have to be started from the side to get enough force on the kicker pedal.

As soon as the engine fires up, advance the timing to full advance and open the choke.  Although I know some people advance and retard the timing while riding, I have never found the need to do so, especially considering that running an engine with the timing retarded can cause it to overheat.

Once the motorcycle is warmed up, it is time to master the hand shifter.  The clutch is controlled by a foot pedal, but unlike the "suicide clutches" that some builders use on later model choppers, stock vintage Harleys use what is called a "rocker clutch." Basically it just stays where you put it. Heel down disengages the clutch and toe forward engages it, so you'll want to be heel down before you shift forward into first gear.

With the clutch in the "heel down" position, the transmission can be shifted into gear.

The final step is rocking the clutch pedal forward while you twist the right grip to rev the engine. Done correctly, the motorcycle will take off smoothly and you can accelerate to around 20 mph before rocking back on the clutch pedal and pulling the shift lever towards you to shift into second gear. Another 20 mph and you'll be ready for third gear and that's as high as you can go on my VL (later models were upgraded to 4-speed transmissions).

Remember to always push the clutch pedal all the way forward to fully engage the clutch.

This all sounds pretty easy on paper, but in practice it can be a little tricky. There are times when you would like to use both feet to operate the clutch and the rear brake, but this obviously won't work when you are stopped – especially on a hill.  Harley's engineers realized this potential problem and solved it by adding a front brake in 1928 (it only took them 25 years to figure this out). The front brake lever is on the left-hand side of the handlebar, which frees up the right hand for just operating the throttle. This takes some getting used to since having the clutch lever on the left side and the brake on the right has been ingrained in us since we first started riding.

For the next 30 or so years, Harleys didn't change too much when it came to their basic operation, so you can use these same steps to start and ride a knucklehead or a panhead. By 1965, Harley was installing electric starters in their big twins and everything got a whole lot simpler – although they did keep the kicker pedal until the mid 80s.  Now that you know the basics, you just have to talk someone into letting you practice on their vintage Harley.  Good luck!

There's nothing like running a tank shifter through its gears going down the road.