Meet the Caramel Curves Co-Founder: A Women Who Ride Profile 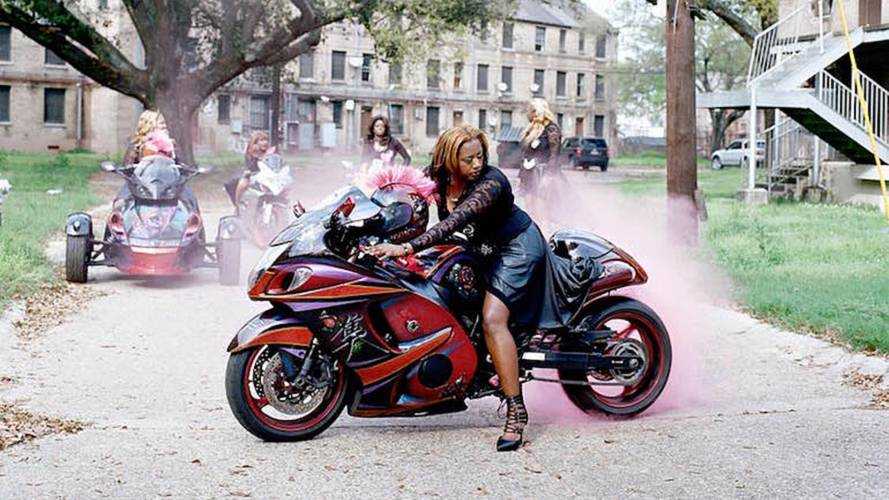 New Orleans is known for its rich history in food, booze, and music. For those who live there—or frequent the city often— it’s also known for things such as terrible roads and temperatures that are suitable for Satan. Neither really help to encourage motorcycle riding. I’m actually still surprised that I got into bikes while living there…

The few motorcyclists I saw when living in New Orleans ranged from those on sportbikes to choppers. These were also mainly men. During my time spent in the city, I personally never saw a woman that wasn’t a passenger on a motorcycle. I'm sure they existed; I just never came across any and didn't really put the two together. At that time, a woman riding a motorcycle in New Orleans was so rare, I felt you had a better chance at getting drunk with Harry Connick Jr. on Bourbon Street than seeing a gal on two wheels.

Fortunately, things have changed and I’ve found quite a few women who ride in the Big Easy. Not only that, I stumbled upon the first all-women’s riding club in New Orleans: The Caramel Curves.

These women are riders I'd never seen in the city, so naturally I reached out to them in order to find out more about this club. Thankfully, I got a response by one of the co-founders, Tru, who loves two wheels and the Crescent City.

Shanika Beatty (aka Tru) started riding in the Big Easy thanks to her father. However, it’s not what you are thinking: he didn’t take Tru out on a motorcycles and show her the ropes.

Tru’s dad stopped riding motorcycles five years before she was born, and did so because he lost a lot of friends along the way. He did, however, leave his old 1970s Honda in the garage for years; it’s still there to this very day. So, growing up, every time Tru’s folks parked in the garage, she saw his bike. She told me that this old parked Honda is what made her want to ride herself.

“I’ve been wanting to ride ever since I was a little girl,” she said.

After he learned of his daughter becoming a motorcyclist, though, he wasn’t too thrilled. He urged her to get loud pipes because, as they saying goes, they save lives. She conceded in order to make him feel better. In the time since then, her father has come around to the idea of her as a rider.

“He was really so super excited about me riding and being a biker," True said. "I guess it’s because I’m following in his footsteps.”

Tru started riding motorcycles in 2003 and on a Yamaha YZF-R6. Back then, there were hardly any women riding, so she relied on the guys to get her up to speed—literally.

“My skill level comes from the guys—definitely—because they would leave me!” Tru laughed. “You had to keep up with them or fall back. I was tired of getting left behind.”

She upgraded to a Yamaha YZF-R1 and rode that for a while before the inheriting a Suzuki Hayabusa.

“My husband had the 'Busa. When he passed away, I had two bikes for a while. Eventually I sold the R1 and kept the 'Busa. I think I’d still be on a Yamaha if I wasn’t left with that bike.”

The Caramel Curves Comes Together

“As far as the girls go—we were few and far between . The ladies that I started the club with, I first saw them on the scene with their boyfriends. They rode because their boyfriend rode. That’s how we even got to know each other—it was because of the guys,” Tru said.

She and five other ladies decided to start an all-women’s riding club in 2005. They brainstormed to come up with what they would call themselves.

The Curves had a rocky start due to one son-of-a-bitch by the name of Hurricane Katrina. Of course, Tru and the rest of the crew were devastated by the storm.

“Some of the girls didn’t even come back after Katrina,” she said.

It wasn’t until almost three years later, in 2008, that the Caramel Curves became official.

“We got our paperwork filed that year and said we’re going to go ahead and do this thing,” Tru said.

After about eight years of riding and two years as a member of the Caramel Curves, Tru decided to try her hand in amateur club racing with the Central Motorcycling Roadracing Association (CMRA). Unfortunately, that was short lived when she crashed.

While racing the R1, another racer tried to pass her on the inside. His front tire hit her back tire, causing her to go down.

“When that happened my bike went flipping, I went flipping and to say the least my bike was jacked up. I wasn’t really tripping about my bike because it was a track bike, but my body! Oh my God, it hurt so bad!”

The CMRA tumble was her worst crash to date. She did have a close call on Interstate 10 in New Orleans, but she avoided falling off the bike, and walked away a bit sore. She admitted that that incident was a bit traumatic.

“I am not meant to hit the ground!” Tru lamented. “But I just love —it’s in my blood. My dad had the strength and courage to let it go, but I can’t.”

When I asked Tru why she wanted to start the Curves in the first place, she explained: “Most girl bikers, when we saw them, would be out, wearing all black and in leather. And don’t get me wrong, they would be sexy and cute. I’m not saying that all females that ride aren’t trying to be sexy, but our approach was different. We’re girly girls. Even though we rode motorcycles, we still wanted to wear pink and purple and red. And we rode in high heels. So, that what’s brought us together because we were girls that had the same idea when it came to riding.”

And as Tru stated, that idea included the ladies wearing heels—well, stilettos if you want to be specific. That was a difficult idea for me to imagine. I asked Tru how the heck does she ride a motorcycle—in her case, a Hayabusa—in stilettos? She answered as if it were the easiest thing to accomplish (And perhaps it is. Don’t knock it ‘til you try it, right?).

“I feel comfortable on the bike wearing heels. It’s not difficult. You just rest the heel on the footpeg and shift with your toes,” she explained.

Doesn't shifting hurt her toes, I asked. After all, the shifter often leaves dents in my shoe at times. She told me that there’s a rubber cover wrapped around her shifter to make it a bit softer.

From Local Celebrities to National Recognition

When out riding, the Caramel Curves tend to get recognized. Tru mentioned that a lot of women approach them, thrilled to be meeting the one and only Caramel Curves. She also told me a fun story about a recent encounter:

“We were out at Port of Call, eating burgers and there was this woman that was like, ‘Oh my God! Are you the ones on those motorcycles?’ and we were like ‘Yea’ and then she asked, ‘Are you guys the Caramel Curves?’ And we said yes. And she was like 'Oh my God! You guys are like celebrities. I saw the bike segment on you guys and y'all are amazing!’”

The Curves distinct styling and the aura they project while riding is not hard to miss. So, they not only get a lot of local press, they also attract the likes of Hollywood stars—actors like Norman Reedus, who featured the club on his "Ride with Norman Reedus" program.

The Caramel Curves were featured on episode 5 titled, Louisiana: Crescent City. And while looking at teasers and promos for this particular episode, I came across the show’s Instagram. Look who got featured on there? Tru, who you can see is doing a burnout. Look at that pink smoke! Look at Norman filming it all!

More Than Just Motorcycles – Why New Orleans Loves the Curves

The best thing about the Caramel Curves, in my opinion, is that they are immersed in New Orleans' culture and community. If you head to the Caramel Curves Facebook page, you will see these ladies are in tune with New Orleans -- involved with a city so easy to fall in love with. That draw the city has is the same draw that the Curves exude.

The city appreciates them so much. “They sees that we’re doing a little bit more than just being bikers,” Tru said.

As the co-founder, Tru is also a co-president for the Cuves. Tru’s role involves collaborating with members, organizing events, and executing all activities and events as well as she can.

“I try to be a team player because I want our members to be happy with their leadership. So I help organize our community service events and make sure everyone is on top of their tasks,” she explained.

When it comes to community service, the Caramel Curves are involved with a lot of great causes. For example, they often help to feed the homeless who live under the bridge near downtown New Orleans. The ladies also pay a visit to the elderly at St. Margarette nursing home.

“We do fellowship with the older people because most of the time, they don’t have anyone else. So we take time to speak to the older people and maybe buy them a little gift or something,” she said.

It’s not just old folks they help; the Curves also help out children.

“We do a biker blessing and during that event, we bring a bicycle to donate to the kids. We’ve also done breakfast with Santa with the kids.”

Tru wants to start doing more biker-related events in the near future. For now, their activities keep Tru and the rest of the Curves quite busy. One thing’s for sure: They are definitely an inspiration for all women—both riders and non-riders alike.

“We care about women. Don’t get me wrong, the guys are great too! But we’re more for women empowerment.”