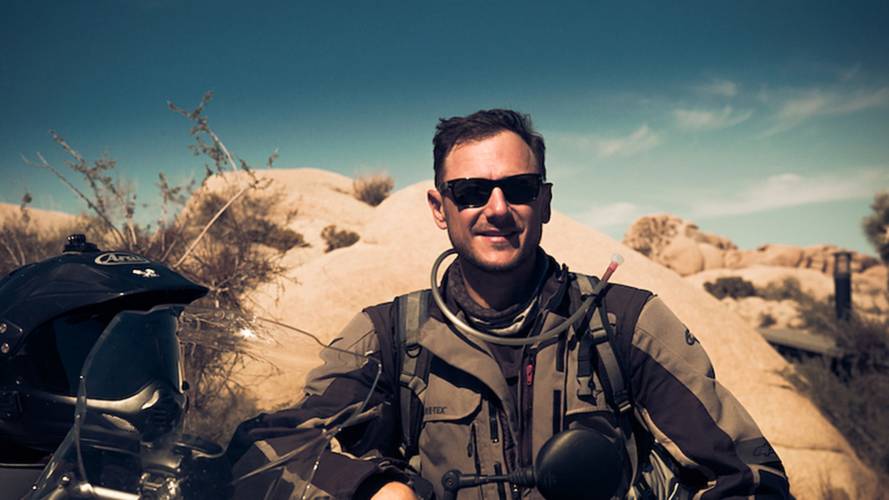 RideApart’s Jim Downs Passes Away(Thank you very much to Andre Pinces and Jessie Gentry for sharing their amazing photos of Jim) RideApart has lost...

RideApart has lost one of its most enthusiastic, supportive, caring and downright cool family members: Creative Director Jim Downs.

Jim, 43, was killed last week in an ATV accident while working on a side project in Alaska. Exact details of the accident are unclear because Jim was on his own at the time. Friends who discovered him later said they are certain he did not suffer.

Jim was born in Belgium, Flemish his first language, but moved to the United States when he was 5 years old. You wouldn’t have known this from meeting him. His mannerisms, his speech, were pure California. He often claimed Vacaville as his hometown. Though, Belgium stayed with him in some sense. Speaking as an adult about the Flemish language he had all but forgotten he once wrote: “it still lives in a back corner of my brain. It's like a forgotten dream suddenly recalled by a smell or a sound. It's so familiar yet utterly unintelligible.”

Perhaps this slight otherness is part of what made Jim such a good person – his ability and willingness to see the world from others’ points of view. In the wake of his passing, dozens upon dozens of his friends and coworkers (past and present) have recounted stories of his unique kindness.

He lived a full life. He was in a ska band as a kid, he raced bicycles, he raced motorcycles (harboring a particular love for Ducatis), he was an active member of the ADV community, and he was famous among friends for his love of animals – especially cats.

Jim joined the RideApart team in early February 2015 and took the reins as creative director roughly a year later. He brought extensive motorcycling and media experience to RideApart and a humbleness that’s rare in the latter field.

He will be missed.

No doubt the number of people who could speak to the quality of Jim Downs as a man could run into the hundreds. Here are just a few of those voices.

Jim was the kind of person you meet once in a lifetime. In this moment of crushing grief, I’m finding it difficult to say anything that will be beautiful enough to honor his memory. He was a man with a passion for riding motorcycles and a love of adventure but he was also a kind friend, an inspiring boss, and an exuberant sharer of positive energy. He was excited about the world and everything there was to do and explore, and he fiercely loved and cared for those that surrounded him.

Watching his friends writing obituaries on his social media accounts, I saw how many careers Jim started or encouraged, and how many to whom he provided honest counsel and support. I’m not quite sure how Jim managed to accomplish the many things he was up to at any given moment but I will always have a memory of the chipper greeting he gave to his pets every time he arrived back home: “Hey guys! What’s up what’s up what’s up?”

I can still hear him saying it and feel the genuine love and care he felt for them.

Right before his trip to Alaska he was picking up a press bike; on his way back home, he ended up rescuing a kitten that was running back and forth across traffic on the busiest part of La Brea. He took the tiny, filthy, flea-infested baby and put it inside his helmet, then gathered himself after having had to stop freeway traffic to grab the little guy.

He was a kind and caring, while being the type to be completely unafraid to get swept up. Sleeping in snowy tundra next to his motorcycle somewhere because he had been determined to explore a location he knew would be worth it, even if it might take him past sunset. Before he left on both of his recent trips to Alaska, he showed me the gun he would carry to protect himself and his team from bears or angry moose. I could barely lift it. He was the type of guy who could carry the load and responsibility of this heavy weapon while having the tenderness to comfort a tiny kitten that was afraid for its life and trembling.

His memory will forever be with me, inspiring me to be a more fearless and loving person, and I will always be thankful for the time I had to be close to him.

I remember reading Jim's first story ever published on RideApart. It was about the Honda Valkyire, a bike I not only knew nothing about, but didn’t really care to learn about. However, I still read it, and after reading it I thought: "Wow, this guy drew me in and even made me enjoy reading about a bike I had no interest in...whoa."

I was fortunate to first meet Jim at Alice's Restaurant last year. RideApart planned a ride to Laguna Seca for the World Superbike races. He had borrowed a vibrant green Kawasaki ZX-10, which he maneuvered around the twisties of La Honda Road to Highway 1 with ease. I thought: "Whoa, this guy rides really well."

That weekend I got to know a little bit about him; he was a videographer and producer, who loved video games, animals, and two-wheels.

When he became the creative director for RideApart, I was stoked. I felt he was the right person to run the site and looked forward to working with him. Luckily, it turned out better than I imagined: Jim was so easy and so wonderful to work with.

Jim gave praise and credit when it was due, and that always felt amazing. His "good jobs" and "keep up the great work" always motivated me to do better, to produce better stories for RideApart. Jim also helped me when it came to refining my writing, and I truly appreciated it. I feel that I have much more refining to do, and it pains me that I won't have you there to provide constructive feedback...

Jim, you were one of the best bosses I've ever had the privilege to work with. You were an incredibly talented writer who could ride anything with two wheels. You will be missed.

May they have kittens in heaven.

I used to own RideApart and to say we went through a lot of editors is an understatement. But with Jim running the ship, all was right in the world. Jim was safe, Jim was calm, Jim loved a good story and a great bike. Jim cared and it showed.

Jim was one of the good ones: easy going, always there with a helpful point on how to make RideApart better, how to make the content more creative, more interesting. He did some fine work.

I always liked Jim, we’d sit in the office, smoke his Export A cigarettes and drink coffee and talk about the expansiveness of life. I would try to set him up with girls I knew but his cats – his dang cats – and his love of travel always came first. Not that I could blame him, he was where he wanted to be.

I’ll miss you, Jim. You were too young, too smart and too creative to go so soon

I’ve only known Jim a few months. Our company, Motor1, acquired RideApart back in April and Jim was told to report to me, so we met under the auspices of an acquisition. Those sorts of relationships can be tricky because I didn’t hire this person and this person didn’t ask to work for my company, yet here we are. I was so fortunate, though, that RideApart came with this amazing person running it. Jim was professional, incredibly talented, passionate about motorcycles, genuine, and compassionate.

That last quality is very important to me, especially in people who manage others. Jim displayed it right away by advocating for his writers and photographers, making sure we took care of them through the acquisition.

He displayed it in other ways that really touched me. Earlier this month, Jim posted a short tale on Facebook about how he stopped traffic on a four-lane highway to rescue a kitten. He ended up adopting it (his third) and named her Chancie. The image he posted of Chancie hiding safely within his helmet on the side of the road is incredibly touching, especially because you can see Jim’s reflection in the visor.

I never met Jim in person. That often happens in our business where so much work is done remotely. It was something I was looking forward to. I envy his friends and family who knew him better than I did because even in the short time we worked together, I believed we would be great friends.

Jim lit cigarettes with sleight of hand. We’d be talking on our weekly Skype meetings, I’d hear the soft “cah-chink” of his lighter, he’d deftly lift his hand to his mouth, and suddenly he’d be puffing away. It was a small action but one that I always saw as physically representative of his fluidity, his ease with the world and his place in it.

In deed, that fluidity manifested in kindness. Everyone talks about the cats, of course, but he also treated people with an uncommon fairness. Unlike so many I’ve encountered in my nearly 20 years in journalism, he was quick to offer praise.

His last text to me was: “Getting on plane to Alaska. Thanks for the great work today.”

Conversation with Jim was never short. Everyone who knew him can attest to the fact that a five-minute chat somehow took two hours. But interestingly for a natural talker, Jim didn’t brag. He didn’t put himself above others. He was an innately sanguine person – relaxed, optimistic.

I used to enjoy ribbing him about his cats and he would look at me in the same way you might look at someone who’s making fun of you for enjoying ice cream on a hot day.

“Hey, I’m the one sitting here holding a cat,” the look seemed to say. “So everything’s right in my world.”

Our existence is bafflingly fragile and heartachingly finite. Jim lived a life that seemed to understand this, a life that was full and that held as its center that famous quote from Kurt Vonnegut: “Goddamn it, you’ve got to be kind.”

He was kind. And goddamn it, we’re going to miss him.