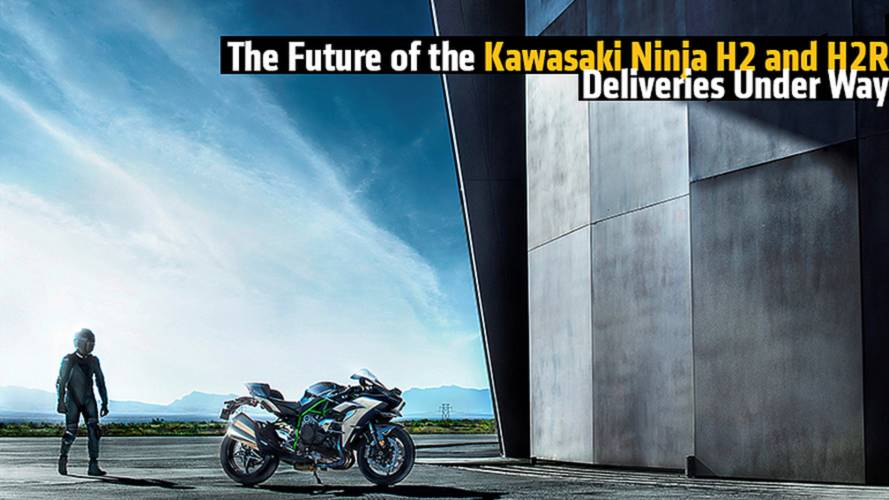 Last week, the luckiest Kawasaki customers to date received the first batch of Ninja H2s. With this news comes fresh information and a bunch of new questions about the future of the Kawasaki Ninja H2 and H2R.

The big boy 300hp H2Rs will be delivered sometime in early April as they involve more complications than the H2s. They feature slick tires (not sure if they must be installed by the dealer), individual stands (since there aren’t any kick stands), and each bike receives a owner’s packet with special, unknown items. Delivery for the H2Rs are slightly behind that of the H2s—this is to ensure that all items are delivered together and on time.

The Future of the H2R

In Europe, you can buy an H2 at any time, but in the US it's through special orders only. Unfortunately, orders for the H2R ended in December and the bike is no longer available. The H2Rs are on a limited production run as they’re hand built in a different part of the Kawasaki empire. Making a H2 is easy, but the H2Rs are more complicated and time consuming.

Here’s the catch: Kawasaki said the H2Rs are limited, but they never said how many will be made and sold. There are no numbering plaques that say "Number blank of blank," and Kawasaki has not yet released any information as to the future of the big bad Ninja. So, while orders have stopped, that in no way means the H2R is over.

Since the first batch have been sold and delivered, what's the team that hand built the first batch doing now? Will Kawasaki reopen orders this summer? Rumor has it, sales will begin again in June or July. The official word from Kawasaki is that they have no information as to any re-opening of sales for this year or next.

It was our understanding that the H2Rs don't feature VIN numbers, which brings up another question: If Kawasaki will be making a 2016 model, how do they tell them apart? The reopening of orders this summer will likely be for 2015 models, but next year, will Kawasaki update the H2R? Probably not. There may be slight body work changes, but still—what keeps an owner from switching around a few parts and calling it a different year model?

If we were wrong and the H2R in fact does have a VIN number, then it’ll be pretty easy to make it road legal (well, in most states besides California). This means we could see some road going H2Rs by the summer. Sales figures are not confirmed, but our best estimates say less than 300 H2s were sold in the US and under 100 H2Rs. Globally, sales numbers were higher than expected, but again Kawasaki won’t officially release those numbers.The H2 and H2R were sold for $25,000 and $50,000, respectively, with no word of mark ups from dealers.

Is MSRP What You Pay?

One owner of the H2 said they paid $25,000 MSRP for their bike with no upcharges or add-ons for extra keys and extra clear coat paint (dealer joke). But, it’s unknown how many (if any) dealers bought H2s for themselves to sell while the market was hot. There are no demo models and even the global media fleets are extremely limited in the number of Ninjas they have (the American media fleet has only one bike of each at the moment.)

Long time Kawasaki enthusiast, stunter, and motorcycle shop owner, Jason Britton took delivery of his very own H2 last week. “It's insane, I just sat and stared at the bike for a few days,” said Jason.

“I’m not sure, what it would have been like to be an engineer at Kawasaki, to pass this as a concept onto the powers to be and have them say, ‘yes, build it,” he said. “It takes a manufacturer that really doesn’t care what others are doing, how the industry is, and building something that makes a statement to say, ‘look that’s what we’re capable of.”

Another big speculation is exactly how much is Kawasaki sand bagging the numbers—if at all. Jason said his butt dyno from his modified ZX-10 makes 196hp at the wheel (H2 is supposed to make 200hp at the flywheel), and the Ninja makes a lot more power and a lot more fun.

"I can go ride that lighter ZX-10, roll on it, click it through the gears and it feels nothing like my H2. It feels almost like getting off my Kawasaki 636 to a ZX-10," he said.

Like we mentioned in our last post about the speculations of the Kawasaki Ninja H2 and H2R, we'll just have to wait and see. The American launch for the Kawasaki H2 is coming up soon with a limited number of riders available.