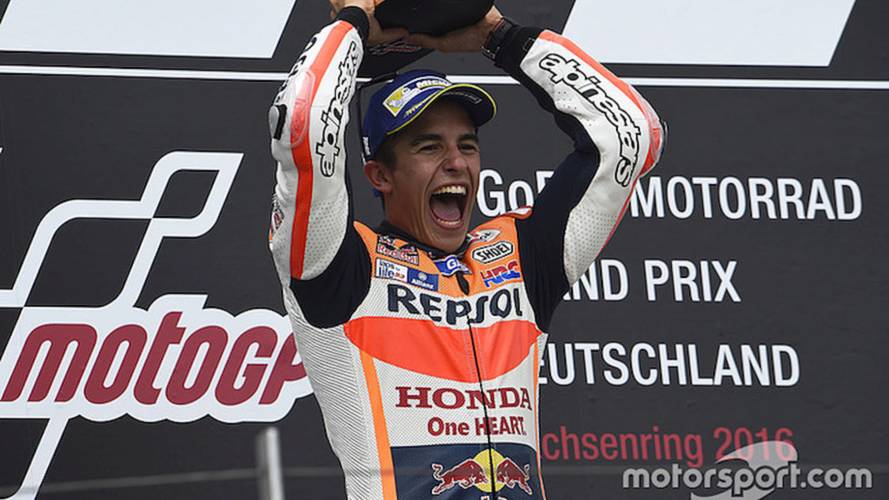 Marquez's Winning MotoGP Bike Rebuilt in Under Two HoursBy: Oriol Puigdemont The bike that Marc Marquez used to win the German MotoGP race at the...

The bike that Marc Marquez used to win the German MotoGP race at the Sachsenring this weekend was rebuilt in less than two hours following the Spaniard's heavy crash in the morning warm-up session.

With 8 minutes remaining in Sunday's wet warm-up, Marquez lost control of his bike on the entry to Turn 8, a very fast part of the German circuit, and he ended up on the ground. The bike rolled several times through the gravel trap and ended up destroyed.

While he returned to the garage on a scooter and took the second bike to complete a final lap to get a feeling for it, his crew kicked off the emergency protocol to rebuild the destroyed RC213V.

When the bike arrived in the garage with the warm-up already over, the mechanics struggled to put it up on the jacks. They finally managed with the help of four people, then closed the blinds and started to work.

By the time the race started, that bike had been ready for only a few minutes. According to an estimation from Marquez's crew chief Santi Hernandez, the rebuild of the bike took less than two hours.

When the pitlane opened, Marquez climbed on the bike and completed a lap to make sure that everything was working fine, then he returned to the pits and came back out with the bike that he used in the first part of the race.

On lap 17, after a trip through the gravel that nearly ended with him on the ground, the two-time world champion decided to gamble on the strategy and swapped bikes before everybody else.

That meant that he had to complete 13 laps with the bike that a few hours ago had been destroyed.

The team did a flawless job with the bike, but the fear that a stone was still hidden somewhere in the engine and could cause damage was still present. But that didn't happen, and Marquez celebrated with his team one of the hardest victories of his career and probably one of the best.

HRC boss Livio Suppo said: "What Marc's team has done is admirable. They managed to rebuild the bike after the warm-up in record time."