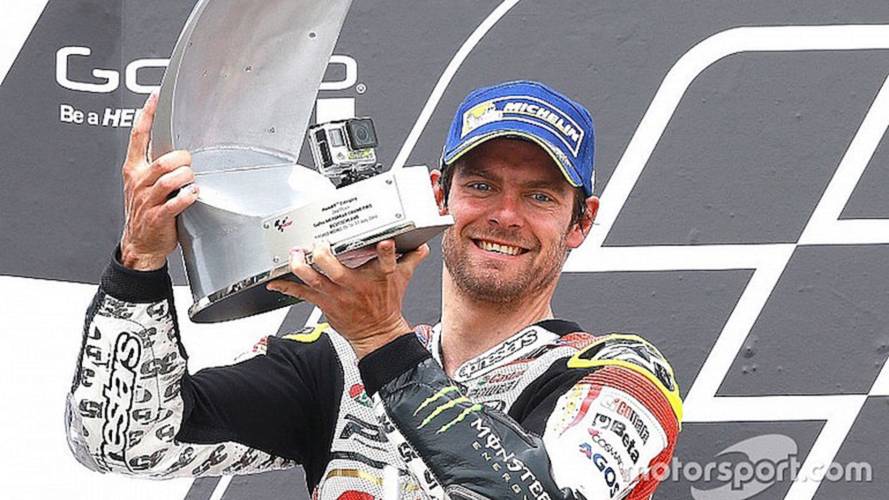 Crutchlow 'Didn't Care' About Crash in Closing StagesBy: Jamie Klein Cal Crutchlow admitted he didn't care if he crashed during his late push for...

Cal Crutchlow admitted he didn't care if he crashed during his late push for second place at the end of a wet-dry German MotoGP round at the Sachsenring this weekend.

The Briton matched his best-ever finish in MotoGP with the runner-up spot behind a victorious Marc Marquez in a wet race that hinged largely upon tire strategy, showing blistering pace on a drying track to make up 11 places from his grid slot of 13th.

Crutchlow was among a bunch of four riders to make their stops to change from wet to slick tires relatively late, emerging in fourth place before picking off the Ducatis of Andrea Dovizioso and Scott Redding to climb to second.

Speaking after the race, Crutchlow revealed that team boss Lucio Cecchinello had asked him to prioritize finishing – but that he threw caution to the wind in the final laps to be sure of catching the intermediate-shod Redding for second.

"I don’t know how I stayed on the bike for the first eight laps with the hard option front tire," said the LCR rider. "I used it in morning warm-up but it took about eight laps to get any heat into it. I nearly crashed on the warm-up lap actually. It was difficult to manage, but I knew I’d come through it. We should have qualified higher, but we showed what we’re capable of.

"I took some risks, but why not? I had nothing to lose. In the last five laps, I had to push, I didn’t care ."

However, Crutchlow expressed his frustration that he didn't come into the pits sooner, once he learned about fellow Honda rider Marquez's decision to come for slicks much earlier.

"I followed Rossi and Dovi, who are both very experienced in those conditions. I actually wasn’t going to come in, I swung in at the last moment. It’s always a gamble."