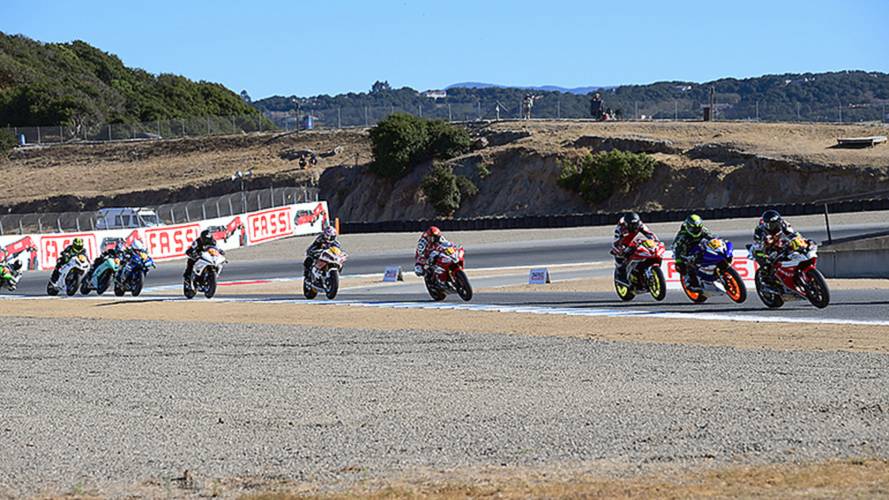 AFM club racers head to Laguna Seca for a chance to professionally race for the first time.

MotoAmerica/WorldSuperbike brought some action packed two-wheeled racing on July 8-10 at Laguna Seca. And whereas for a lot of guys and gals it wasn’t their first rodeo, this particular weekend also brought the newest of the new. A few of my fellow American Federation of Motorcyclists club racers decided to head down for their pro-racing debut at the MotoAmerica races.

The majority of these “new” racers were on 600cc motos, and they included AFM members such as Jovan Betton, Marcus Zarra, Patrick Murphy, and Patrick Buchcik. All of the mentioned individuals have been racing for years at the club level, but the common theme with all of them is that they sought to race professionally after seeing cream-of-the-crop racers from MotoGP perform at Laguna Seca.

“I went to MotoGP in 2005, and I told my friends, ‘One day, I’ll be on the other side of that fence racing.’ So I thought about for my 30th birthday making it a bucket-list item and coming out here and giving it a shot,” said Murphy.

Patrick Murphy giving the thumbs up before his race.

Betton shared a similar sentiment to Murphy. He explained: “When I first started riding, I always said I would love to become a professional motorcycle racer. Just watching Ben Spies, Rossi — all of them — just excited me so much every time. I watched them ride, and I had a feeling that said: ‘I want to do that.’ That’s why I’m out here today.”

Buchcik said he was drawn to the prestige of racing at Laguna.

“I’ve come here for track days and this is where my motorcycle story pretty much started. I came to watch MotoGP in 2008, and that was the year before I even got a bike. And I met all these people here , and I got introduced to racing then started riding.”

For Zarra, MotoGP definitely was major influencer. However, it was also “the need for more” that persuaded him to ultimately take the plunge.

“As I got older, I had a family, so I stopped riding for a while. But then I got back into it as I got even older, and I started riding track days and said, ‘OK, I need more. OK I’ll race,'" he said. "I raced AFM; that’s fun, but I want more. I raced WERA, and that still wasn’t enough. It still wasn’t scratching the itch, I needed more."

Interviewing Marcus Zarra after his race. Photo by Greg Sharp.

What it Takes to Race

All four amateur racers decided to race the MotoAmerica 600 SuperSport class, which, as they all confirmed to me, was not an easy feat.

None of these AFM racers told me that racing at Laguna Seca was a spontaneous decision. All of them told me it took some thought and time before making the commitment. And after talking to them more about what it takes to race MotoAmerica, I learned that you can’t exactly race the minute you decide to. It definitely takes a lot of time, preparation, practice, and money.

“It takes a lot! And I can’t even tell you what because I have a lot of things to work on to get to the top level. You definitely need to gel with the bike, have a good crew behind you — you gotta be ready for because there’s a lot of different things that come at you as opposed to club racing,” said Betton.

So, what does it exactly take to race for MotoAmerica? Firstly, you need to have a certain amount of points from your club racing organization. Buchcik explained: “You need to have 100 expert points from AFM — or WERA, or any other race organization — across three different race weekends. So, that’s what I was pushing for these last three months.”

Additionally, in Buchcik’s case, he only had small-bike experience — he had only raced 300 and 450cc motos. As Betton mentioned earlier, you not only need to gel with the bike, but you need to obtain the points needed on the bike you’re planning to race. So Buchcik had to spend three months trying to get comfortable on a 600cc motorcycle.

Once you have the right bike and the requisite seat time, you also need to have a crew of people who can help you. The crew helps out with anything and everything –– from getting tire warmers and a generator to the grid, to listening in on the radio so they know your positioning during a race.

“You have to have crew T-shirts, specific tires, and fuel want you to run. You also need to make sure your bike meets all of their rule requirements. You then come out here, do practice, and be 107 percent of the fast guys,” Murphy explained.

Adhering to the 107 percent rule (a rider's lap time must be within 107 percent of the fastest rider) against seasoned MotoAmerica racers is by far the most difficult thing to accomplish when trying to go pro, according to Betton.

“It’s tough, especially when it comes to the competition," he said. "The competition is higher . There’s fast guys in club racing. But in the pro races, there’s a lot more people that are faster; therefore, they are closely grouped together. The top five people in front of me during practice were only five- to sixth-tenths of a second from each other."

In the Professional Spotlight

For a few of the AFM racers, heading out on the track during a professional race weekend was nerve-wracking.

“First time going out was pretty surreal," Murphy said. "To go around and see corporate banners and sponsors. Honestly, seeing a TV camera pointed at you for the first time when you’re trying to ride is distracting.”

Of the AFM racers interviewed, Buchcik was the only one whose lap times met that 107-percent rule. For the others who didn’t quite make the cut-off times, they had one last chance. The Last Chance Qualifier (LCQ) is a race that’s pretty self-explanatory: The top five competitors in the LCQ race have the chance to go on to compete in the 600 SuperStock race the following Sunday.

I headed toward the grid area for the LCQ, which was the last race held that Saturday. I was hoping to get more quotes from my fellow AFMers (as we like to call one another), but there was no need. I didn’t have to ask any of them what was going through their brain; I was able to see it through their body language, facial expressions, and overall energy exuded.

I ended up sticking around Betton and his crew, and I could immediately see he was tense. Not only that, his crew members were also feeling the heat, frantically making sure their racer had everything he needed before attempting to become one of top five. By the time the race began, I, too, felt a bit frazzled from all the activity.

Racing for MotoAmerica is no joke! I followed up with Zarra after the LCQ, and there was no hiding the excitement in his voice when he recounted his first-ever pro race: “So much was on my mind… everything just kind of stopped and all I focused on was the guy in front of me. He got a good launch so I decided to follow him, and you know, just pin it!

“And all of a sudden the front wheel came off the ground. And normally that spooks me a little bit in AFM because when your front wheel is off the ground, you’re probably going to hit somebody. And then after that, it was like, ‘OK I need to calm down because I’m all wired.’”

I asked him if he was able to calm down, and he immediately shook his head.

“Normally I can in an AFM race… in a WERA race I’m usually fairly calm," he said. "I’ve done enough of them that I don’t have that antsiness. This was like my first race all over again.”

Unfortunately, Betton, Murphy, and Zarra didn’t make the top five this time around. But did this at all discourage any of them from wanting to continue racing for MotoAmerica? When I asked each of them if they were planning to do more MotoAmerica rounds, I received a resounding yes –– even a “hell yes!” from Betton, who hopes to do more rounds this year.

For Buchcik, he hopes to do more than just a round.

“I'd like to do a whole season one day," he said. "Not sure how funding is going to work out, but that's to be addressed eventually.”

Continuing their pro racing journey is cemented in the hearts and minds of these guys — nothing will stop them from continuing to fulfill their goals. I’m excited to watch each one of their journeys along the way.