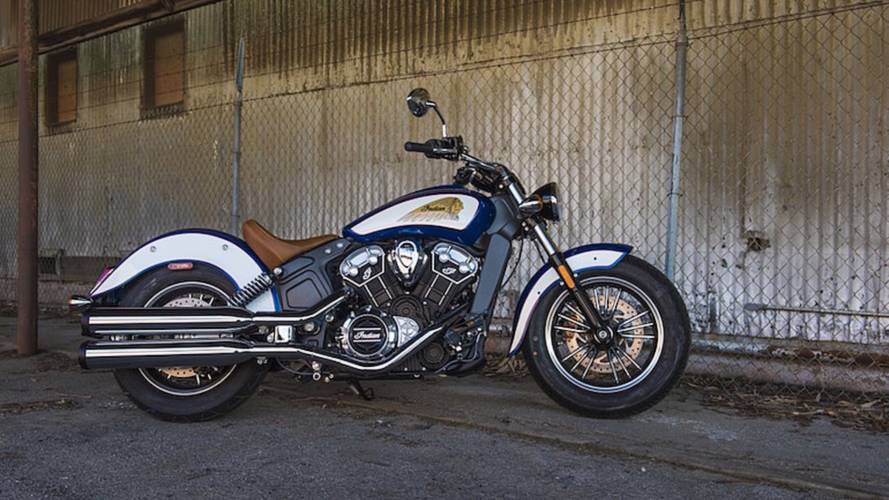 OK, can we just stop for a second and acknowledge how sexy the Scout’s new “Brilliant Blue over Pearl White with Fireball Red pinstripe” paint scheme is?

I mean, great googly moogly. I want one of these things in my living room, just so I can stare at it. At night I would cover it with a blanket and whisper, “I love you,” quietly enough that my wife wouldn’t hear.

The Scout’s new paint is just one of the minor tweaks being made to Indian Motorcycle’s 2017 line-up. Other bikes receive new paint, while the Roadmaster and Chieftain will be equipped with a new infotainment system, and the Scout and Scout Sixty get a handful of improvements designed to make them even more rider-friendly.

Meanwhile the Scout Sixty (which can now be made A2-license compliant if you live in Europe) will be available in three colors: Thunder Black; Pearl White; and Indian Motorcycle Red.

The Chief Classic will be available in Pearl White, and a new two-tone scheme: Burgundy Metallic over Thunder Black

The Chief Dark Horse remains dark. If you’re eager to avoid being seen at night by other road users, this bike’s probably your best choice.

In addition to being equipped with Indian’s new Ride Command infotainment system, the Chieftain will be available in five colors for 2017: Black Pearl; White Smoke; Silver Smoke; Wildfire Red over Thunder Black; and Star Silver over Thunder Black

Still dark, and will not be equipped with the Ride Command system (on the plus side, it’s $2,000 less expensive than other Chieftains).