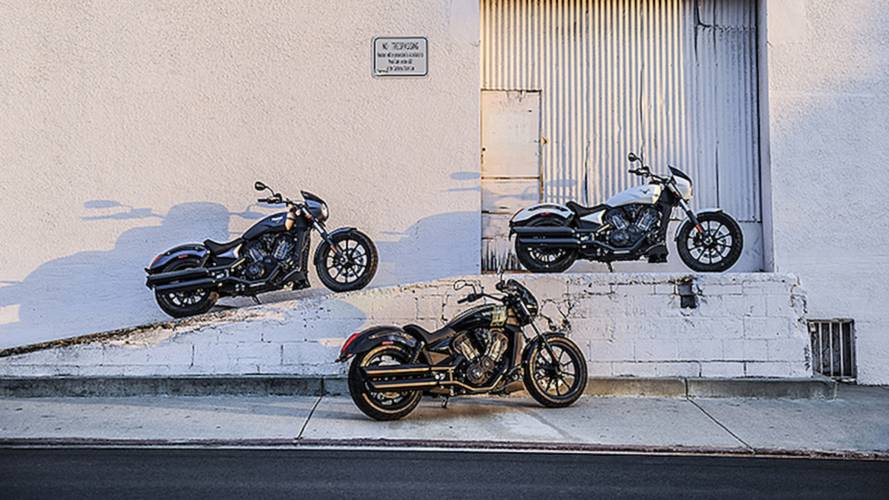 Victory Motorcycles has shared its 2017 Model Year Line-Up, revealing no major changes since the unveiling of the 1200cc Octane earlier this year but offering a few new paint schemes.

The bike is still not available with ABS in the United States, despite being equipped with the feature in Europe. But Victory is offering an optional Stage 2 Kit that includes an air intake and 2-1 exhaust to offer 10 percent more horsepower and 5 percent more torque.

The Gunner remains unchanged from previous years. It is still available in Suede Titanium Metallic ($13,499) and Suede Sagebrush Green Metallic ($13,899).

The only Victory cruiser to carry dual front disc brakes, the fat-rear-tired Hammer S is available in Gloss Black with White Racing Stripes ($15,599).

The popular stalwart of Victory’s cruiser line-up remains unchanged from last year’s tweak. It is available in Sunset Red ($13,999) with color-matched frame.

Like the Vegas but less colorful, and unintentionally (we assume) given a name that references cocaine, the 2017 Vegas 8-Ball is available in Gloss Black ($12,999).

The mobile-disco version of one of a Magnum, the 200-watt 10-speaker-laden Magnum X-1 is available in Pearl White with Platinum overlay and Electric Red pinstriping ($24,499).

A great bike (we rode one to Italy last year) that’s starting to feel pretty long in the tooth when compared against other tourers, the Jetson-esque Vision is available in good ol’ fashioned Gloss Black ($21,099) and Captain-America-like blue that Victory calls Gloss Blue Fire ($22,099).

Notably listed as a 2016 model by Victory (is that a typo or a sign of something new to come?), the electric Empulse TT has a 10.4 kWh battery module that can fully charge in 3.9 hours. It is the only electric bike equipped with a gearbox – a six-speed transmission – although shifting is entirely optional as it also operates in a twist-and-go mode for maximum convenience. The bike is available in Titanium Silver with Havasu Red ($19,999).