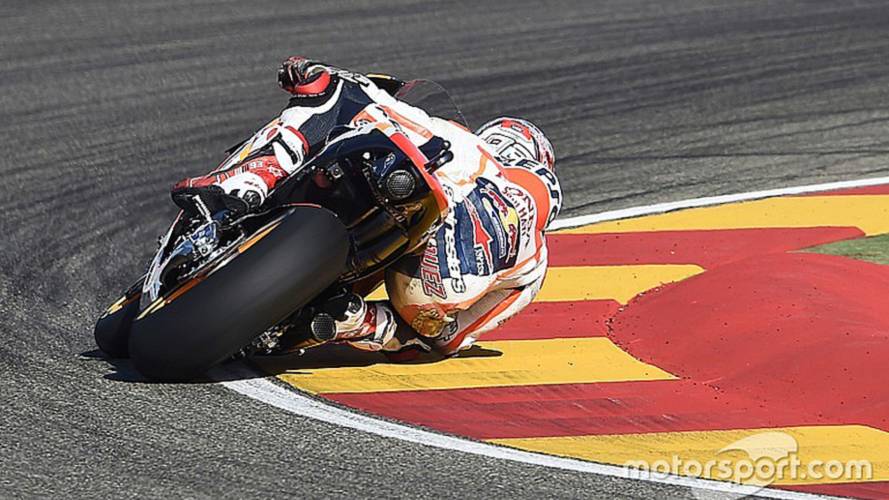 Check out the MotoGP Aragon 2016 Photos from MotorSport.com.

Repsol Honda’s Marc Marquez picked up his fouth win of the 2016 MotoGP season this past weekend at the Motorland Aragon Circuit in Spain. He now leads the championship by 52-points over rival Valentino Rossi. Here are the Top 10 images from this weekend’s race for your viewing pleasure. Let us know if this is something you enjoy seeing on RideApart by leaving a message in the Comments section below. For full results and comprehensive coverage of MotoGP, check out Motorsport.com.

Movistar Yamaha's Jorge Lorenzo on his way to a second place finish at the 2016 Aragon GP. Check out his helmet!

The 2016 Aragon MotoGP race gets underway in sunny Spain. Lorenzo grabbed the holeshot on the M1.

Movistar Yamaha rider Valentino Rossi finished third after a mistake in the closing laps saw him run off the track on the brakes. Yikes!

Former MotoGP champion Nicky Hayden subbed on the Marc VDS Team. He finished 17th overall. He will race in WSBK in 2017.

Scott Redding rides the Pramac Ducati at the Aragon GP and while he looks good he finished in 19th, poor guy.

Andrea Dovizioso aboard the Ducati at Aragon GP 2016 - He would finish in 11th place.

Marc Marquez looks like he is about to hit the Start Button on his next MotoGP title. Or is that the Easy Buton from Staples?