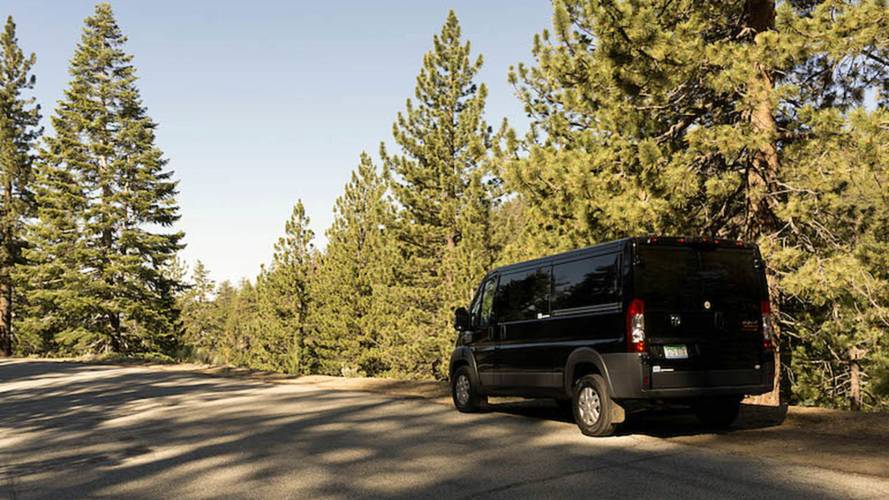 Jessie Gentry packs her bike into a Ram Promaster Cargo 1500 and heads for the mountain trails.

I took the Ram Promaster Cargo 1500 out the other weekend to see how it fared as a camping and pit vehicle. I’m all about #vanlife so I’ve been eyeing these vans for a while now and dreaming of outfitting one to live out of – with room enough to bring along a bike with me.

Figuring I'd give it a soft-try, I packed up my camping gear and my dirt bike and hit the road.

Driving up the mountain I gave my friend a call to let him know I was almost to my destination. He told me to drop a pin when I arrived to camp so that he would know where to find me in case he didn’t hear from me the next day. ("Drop a pin?" What does that mean? This sentence makes us feel old. –Ed.) I told him not to worry and that I was going to be up at the top of the mountain in Mt. Pinos.

We chatted for a bit and I hung up the phone. My iPhone was plugged into the van’s USB setup so the second I hung up the music kicked in again, blaring. I had been listening to a nostalgic Americana playlist on Spotify and the next song to queue up was “American Girl.” Bouncing a bit in my hydraulic seat over the bumps I was singing the song at the top of my lungs and finding the beat on my knee when suddenly I got a flash of the same scene in Silence of the Lambs, except I’m no Buffalo Bill.

The thought occurred to me that maybe I was supposed to be a bit afraid driving alone into the wilderness with just camping gear, a van, and my motorcycle, but instead I turned up the stereo and sang a little louder.

For the trip, since I had the spacious cargo van, I packed everything including the kitchen sink – even though it was only an overnight. I also brought my dirt bike, a 1986 Honda XR250, as well as all my riding gear (including my new Alpinestars Hi-Point boots), my guitar, my sleeping pad and bag, camp-stove and cooler, meals and snacks (including coffee and bacon for breakfast) and, of course, my camera. I actually brought a packable sink but that’s one of the smallest items I had.

I had read that the area had some great Jeep trails and I was feeling like a solo trip shouldn’t see me off ripping single tracks through the wilderness without a spot, so I went planning to just have a mellow time, a nice ride, and some much needed fresh air, trees, and an escape from L.A.

At least I brought my Snake Pliskin boots.

When I drove in, I decided to go up and see the very top of the mountain. I had read there was a dirt lot where you could park overnight for free and sleep in an enclosed vehicle, but that the lot was often taken over by stargazers who insisted on no lights or fires that would interrupt their view.

I decided to scout it out, having assumed most places would be pretty empty since it was the middle of the week. When I arrived to the lot, though, there was actually a few cars parked with tents set up further away, and one lone stargazer parked in the very middle of the lot with his telescope and a full folding table that held computer gear. He looked pretty serious and I was nervous that the light in the van's cargo bay would annoy him, so I drove back down to the first campsite I had seen, which was completely empty but still would have cost $20.

Being a lone lady camper I decided it was smarter to go back and camp close to people – and save $20 in the process. Plus, I planned to sleep in the van and didn’t plan to make a fire; I was pretty sure I could manage to not annoy the stargazing curmudgeons.

Once I parked in a nice spot I opened up the cargo bay doors all the way and clipped a curtain up to cover the door space facing the lot. The van was so much nicer with the doors open, catching a cool breeze.

I set up my camping chair and table and moved my stove and kitchen things to the back end of the van, creating a little makeshift kitchen area. I opened up my sleeping pad and inflated it, unrolled my sleeping bag, then prepared myself a cozy little spot and made some dinner. I planned to try to get to sleep as early as possible so I could get up and ride in the morning.

The best part of the van is obviously the cargo area and its versatility, but it drives pretty well, too.

The next morning I packed up and left the camping area with the bike loaded in back, so I could get closer to the trails I heard were best. The route there required driving on a steep fire road that wasn’t completely maintained. The Promaster had enough clearance and power to make it up without too much skill. Don't tell the guys at Ram, but I also drove it over some washouts and deep ruts – without incident.

The van comes equipped with a driver seat that has shocks, so when you are driving over bumps you get an excitingly smooth rolling bump rather than a jar. The ride is very smooth and adaptable. Even on previous trips, when I was riding in the passenger seat without the hydraulics it was pretty comfortable, though.

One irritation is that when you hit bumps with cargo in the back it gets incredibly noisy. There are obviously no seats or carpeting in the cargo area to absorb sound. To keep things quiet I had to strap my bike ramp tightly to the wall, so it wouldn’t endlessly clang as I drove down the road.

Once I got to a nice flat spot up the trail I pulled over and unloaded my bike. Being able to drive the van up the road meant I was immediately in a nice spot to get some beautiful vistas without having to ride too far.

I buzzed around and saw some amazing meadows and epic vistas. The Jeep trails are the most fun to zip down and some of the more difficult Jeep trails have tiny jumps and berms to play about on.

I managed to hold myself to safer speeds and maneuvers for fear of eating it while alone on the mountain. Normally, I like to really push myself on the dirt but it was a great mental exercise to take things easy and enjoy the view more than the shred.

Once I got back to the van it made an excellent cool down zone with the doors open.

That is, after I managed to battle the back door locking mechanism, which sometimes gets stuck in the closed position. I had to fight with the door a few times over the course of the trip and eventually figured out that if I used the metal rod off my camera’s follow focus rig I could pop open the lock. Things had been super frustrating before I came up with this work-around because unloading the bike out of the side would have been challenging – possible but definitely not ideal alone.

Overall, though, the Promaster ended up being an amazing sidekick on my trip. I can imagine having one of these outfitted and parked in my driveway – fully loaded with gear for camping or track days – and having such a blast with it. Hauling a bike and having it all contained within the cargo area is especially fun, and not having to worry about tying down your camping gear (aside from the noisier stuff) is a real luxury.

This type of van has definitely been done before but Ram's stockier take on it wins in my book. I’ve driven a few and I’d previously not encountered a van of this type that didn’t feel tipsy on a corner. This one doesn’t.

The van is plenty roomy and tall and even at 5-foot-11 I felt like I had plenty of space for myself and my over-packed gear. I could have even slept with the bike in the cargo area had I needed to stop somewhere I didn’t feel comfortable unloading it.

If this van were mine I would install a pull down loft bed and a small kitchen area. Then I'd be good for just about any adventure. And then some.