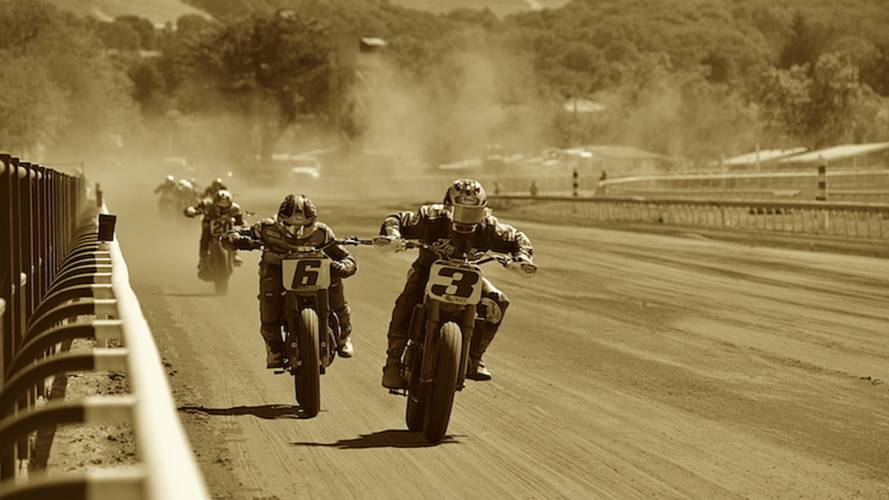 A chat with the man who introduced the Indian FTR750 to dirt: Joe Kopp.

This past weekend was a big one for not only AMA Pro Flat Track fans, but also for Indian Motorcycle fans. The all-new Indian Scout FTR750 made its debut at the Santa Rosa Mile, and Joe Kopp was the lucky rider to race this new flat track breed.

Some may be asking: "So, Indian has a new flat track bike, what's the big deal?" And it's an OK question to ask — not many folks know about the history of American flat track racing.

The reason Indian's appearance this past weekend was so exciting is the company is finally revisiting its old rivalry with Harley-Davidson. This rivalry started when flat track racing first came to fruition back in 1932; Harley-Davidson and Indian were arguably the only two major American manufacturers duking it out at that time. However, the battles between the two were short lived as Indian went out of business in 1953, and Harley was left to monopolize the series until British and Japanese manufacturers decided to step in.

Sure, good racing was had by having more manufacturers in the mix, but there hasn't been another American manufacturer in this American sport for more than 60 years! Thankfully, Indian is changing that, and by recruiting big-gun riders like Bryan Smith, Jared Mees, and Brad Baker, it looks like it has a shot of taking home a number one plate in 2017. Look out Harley!

Joe Kopp Gets to Relive his Racing Days

Others may also be asking: "Who's Joe Kopp?" Kopp is a former AMA Pro flat track racer who won the 2000 AMA Pro Grand National Championship. He has been racing dirt all his life, and turned pro at the "old" age of 22 in 1993. Despite his age, he stuck with the sport for 12 years before retiring. When looking at his career highlights, you see that even though he has won the Grand National Championship only once in his career, he placed top three every year onwards. Joe is no joke!

Prior to his races this past weekend I was lucky to chat with Joe about his participation with Indian's new flat tracker. And to not take up too much of his time, I asked him three burning questions I just had to know about his involvement with the Indian FTR750.

LL: How did you get the opportunity to ride as well as debut the Indian FTR750 here at the Santa Rosa Mile Season Finale?

JK: Well, about a year ago I heard Indian was going to get into flat tracking in 2017. So, I contacted them at the time to see if I could be of any help with development, and that was just something I’ve been doing a lot of since I retired from full-time racing. It took them a while to get the bike built and going, but once they did, we got back in touch and ridden it a couple of times. I guess they liked what they saw and asked if I wanted to be the lucky rider. Also, I think most of the current riders already had obligations to finish out the season so I was open and available – free! I said: "Let’s do it, I want to play!"

LL: When it comes to the Indian FTR750, can you tell me some specifics about it? What you like about it? How it’s different from the Harley-Davidson 750?

JK: I guess the tool we all gauge off of in dirt track is the XR750 as far as twins go. The Harley is a proven bike and a hard one to beat. So, comparing to that, it’s a little bit snappier on the bottom end. It has really trackable power; it’s really tunable; it has an electronic ignition, electronic fuel injection, just a lot of things that the Harley doesn’t have. So that part makes it tunable for dirt track. And I know that and some of the other brands have that same stuff available, but the way this bike puts power to the ground is real similar to a Harley, I would say. It’s just a little more modernized Harley XR750 is what it seems like to me.

It revs out a lot higher than a Harley, which is really neat to be able to gear it on certain tracks. So, it seems to be a really good bike – it’s almost too good! That means it puts it all on my lap.

LL: It's great that you're racing the finale. What about for 2017? Any plans to pick up racing again?

JK: I’m not racing. Hopefully, I’m still on board with Indian helping to develop things and work with them and work with their team riders and stuff but I’m not coming back out full time racing that’s for sure. I got a family and kids that mean too much to me. Even if we have a good outing , I’m just past that part of my life. I enjoy doing exactly what we’re doing this weekend and stuff like that. I think Indian’s got a pretty full plate next year with everything going on so I hope to be right in the middle of that and help the team get a number one plate.

Joe ended up 7th overall this past weekend at the GNC1 main race. Even though he doesn't plan to race full-time again, I sure hope to see him out there getting sideways from time to time!