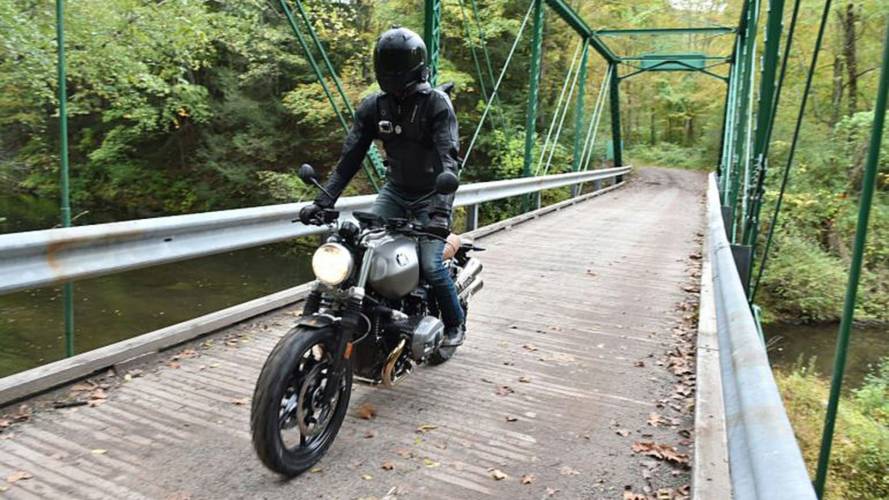 A Bavarian scrambler worthy of the title.

When the term "Scrambler" first became popular, it described street bikes that were converted to compete in off-road races of the time. Typical modifications included knobby tires, high-mounted exhaust, increasing ground clearance/suspension travel, and chopping off anything unnecessary to save weight. By the mid-1970s, off-road racing had been taken over by purpose-built motocross bikes that were faster, lighter, and had much better suspension. Scramblers became irrelevant and just about died out.

Fast forward to 2006: Triumph brings the Scrambler back and gets us all nostalgic for Steve McQueen by bolting on bits to a Bonneville. It's taken some time but other manufacturers like Moto Guzzi and Yamaha have followed suit by taking existing bikes and slapping on some parts. Ducati should get some special credit for building a platform from scratch for their Scrambler, but it should be obvious by now that scramblers are back.

The thing is, the definition of the term has evolved. It's not about having a truly off-road capable bike; it's about having a bike that looks like scramblers from the 60s. It's about looking adventurous, whether or not you're getting the bike dirty. Truth be told, I don't really care for them because I think they're a compromise that puts form over function. So, when BMW announced they were joining the "turn an existing bike into a scrambler" party with the R nineT, I was curious to see if it would bring something new to the table or if it was just like all the other silly scramblers. I suspect you can guess what the answer is: if I had to buy a new scrambler tomorrow, I'd be in line at the local BMW dealership.

The first thing you need to know is that the Scrambler costs $13,000, making it a significant $2,095 cheaper than the R nineT. Obviously, some cost-cutting measures were implemented to make this happen, and we'll look at those more in detail in a moment.

The second thing you should know is that I'm a BMW fanboy. In the last few years, I've used a K75C, R1100S, K1200R, and an R1150GS as daily riders. I think the R nineT is beautiful and while I personally have not yet had a chance to ride one, it's been well received by reviewers and consumers. So, going into the press launch, I had very high hopes for the Scrambler, even if I was apparently the only person out there that thought it wasn't a very good looking motorcycle when I first saw photos of it.

Good news: it looks better in person, especially when adorned with the optional cross-spoke wheels. Better news: the Akrapovic high-mount exhaust looks and sounds great. It's a little silly to get excited about the extra 'clearance' of a high-mount exhaust when the headers are one of the lowest parts of the bike, but remember—form over function.

The air/oil-cooled Twin is one of the Scrambler's best features. It produces 110 horsepower and 86 pound-feet of torque, instantly putting it above everything else in the category. The torque is great for pulling away from a stop or slow speed situations, and the power means the Scrambler has no problem cruising well above legal freeway speeds if you're able to put up with the wind. Not once was I begging for more power at any point during the ride. The Boxer Twin engine is a good match from a personality standpoint, too. At idle it shakes, and blipping the throttle in neutral gives you the characteristic BMW Boxer pull to the right. It's like a dog tugging at its leash—it wants to go!

Some slight modifications to the fuel map for Euro 4 compliance have cut 2 lb-ft. of torque and seven miles per gallon (now down to 45 mpg) from the Roadster, but you won't notice the difference in torque and the gas mileage is still good enough. The six-speed transmission is excellent, plus the gearing is well-spaced for our test loop and I had no issues with missed shifts, false neutrals, or any sort of clunkiness.

My first few corners with the Scrambler were surprising - it was ponderous and it inspired very little confidence at low speeds. You'll get used to it over time, but it's truly a shock considering how good of a handler the R nineT is purported to be. It might be easy to blame the larger front tire or chunky tread, but the presumable culprit is a chassis modified for off-road stability. It's 2 inches longer (60.1 inches vs 58.1 inches) and there are three more degrees of rake (28.5 degrees vs. 25.5 degrees). In addition, the bars are wide but not in the pleasant way that gives you extra leverage - these were just unwieldy.

The suspension is where you can start to see how BMW saved money, and it's a disappointment considering how much the marketing department wants you to believe you can have fun off-road.

Suspension travel is increased slightly over the Roadster, with 4.9 inches up front and 5.5 inches in the rear. This is a good thing, but the suspension is too stiff and there's not much you'll be able to do about it as the front is non-adjustable and the rear only lets you play with preload. When it boils down to it, this is a 498-pound street bike with 70/30 tires and a teeny bit more suspension. So, keep it to fire roads and gravel trails and you should be OK.

The Germans also saved some money on the brakes, but I don't have any complaints about them because they perform well. Instead of the radial-mounted monoblocs of the R nineT, the Scrambler gets regular four-piston calipers from Brembo squeezing dual 320mm discs up front and a 265mm disc in the rear. The feel is good, totally fine, and you'll have no problem locking up the rear on any road surface if you want to look extra scrambler-y. (Or is it scrambled?)

As you'd probably expect from BMW, the Scrambler has a solid electronics package, and the Scrambler gets an upgraded alternator (720W vs. 600W) so you can run all the supplemental gadgets you want as well. The bike comes standard with ABS while ASC (Automatic Stability Control) is a $400 option. Both of them can be disabled: ABS has to be turned off before the engine is started, while ASC can be disabled on the move.

Our test bikes were also equipped with a BMW Motorrad Navigator V GPS ($1,069 - You know if you want a GPS or not) and heated grips ($250 - Every street bike should have them). The stock motorcycle comes with cast aluminum wheels and street tires, but I suspect the grand majority of Scrambler buyers are going to spend the surprisingly reasonable amount of $500 to upgrade to cross-spoked wheels (which allow for tubeless tires) and Metzeler Karoo 3 rubber.

What you might not expect is what this bike lacks. The Roadster does not have a fuel gauge, so the same omission with the Scrambler is understandable (but still frustrating). But the Scrambler loses the tachometer and gear indicator from the Roadster, which is a bummer when you're spending at least $13,000.

The seating position is neutral and comfortable, though padding on the edges of the seat is a little thin. Standing was a different story, as I struggled to find a position I was happy with. Leaning forward and grabbing the tank with my knees forced me to hunch over too much. Finding a posture where my upper body was happy meant I was too far back on the bike. I just couldn't win. If I had the bike for a few days, I would have rotated the bars forward to raise the grips a few centimeters.

I might not like the way it looks, but the fit and finish seemed excellent. Long-term durability may be a concern if you're regularly getting dirty: after the first day (admittedly doing 70+ on a fire road with some potholes) a colleague put a small dent in his front cast aluminum rim. The Monday morning quarterback in me thinks that the cross-spoked wheels would have been fine but I don't have a way to prove that. The next day, I was following someone else on the highway into New York City and I noticed that his brake light was flickering even though he wasn't applying the brakes. I suspect some of our off-pavement shenanigans had jarred a wire or two.

As a lot of the parts from the Scrambler are the same as the Roadster, I would hope that the new bike will suffer from less of the teething issues that can arise with new models. BMW built this for you to customize, which is why the wiring harness is pre-split to separate engine controls from other systems, and the rear subframe can be popped off by removing 8 bolts. Munich offers some OEM accessories but it'll be interesting to see what the aftermarket starts building for this bike in the short term.

BMW is counting on the Scrambler to bring it new customers as part of its effort to double market share in America by 2020. I was slightly dismissive of this until the company dropped a fascinating statistic on us: 9 percent of R nineT buyers were first-time motorcycle owners! So BMW is looking to attract riders who like the look of both the R nineT and the idea of adventure, but at a reduced price point.

Now, said price point is still higher than any other scrambler out there, but in this case you're getting more for your money. I mentioned at the beginning that this is the Scrambler I would buy, and that statement is mostly due to the motor.

Want the prettiest scrambler? Check out the Moto Guzzi Stornello.

Want the cheapest? See my thoughts on the Yamaha SCR950.

Want something quintessentially British? Wait for Triumph to get back on the bandwagon.

Want the fastest? Congratulations, you're getting a BMW.

With all that said, BMW potentially made this entire review irrelevant for a lot of you with the announcement of the Pure and the Racer. If you like the R nineT as a general concept but want something cheaper, the Scrambler is no longer your only option. Prices for both the Pure and Racer were just announced at lower price points (approximately $11,500 and $12,500 respectively).

Plus if you're reading this review, there's something you'll really enjoy that will be announced at EICMA - I'm just not allowed to tell you about it yet...

The R nineT is best-in-class, but you really have to like the class. Be honest with yourself when you go shopping for a bike like this. There's nothing wrong with wanting a scrambler because it looks cool, just don't expect true off-road proficiency. If the Scrambler gets more riders looking at BMW, then it has done its job for the German firm. But if it gets more new riders on the road, then it's good for all of us.