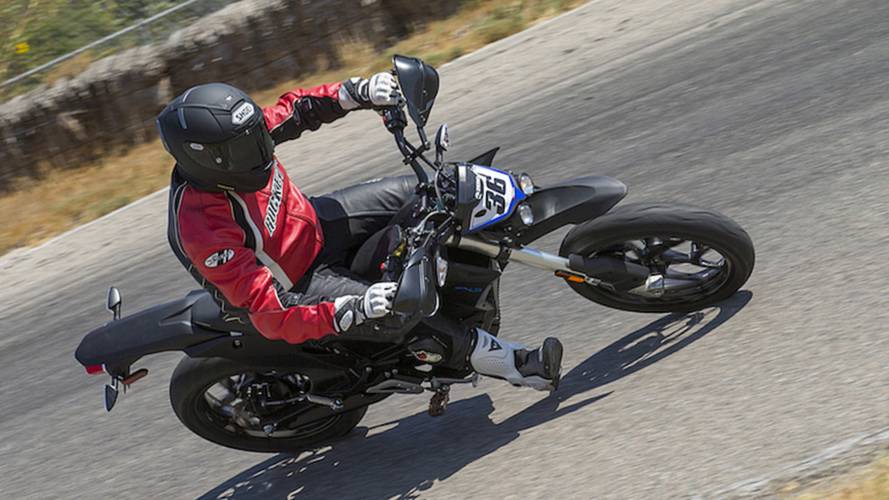 Recently the folks at Zero got in touch to ask if we’d like to spend a day tearing around on a 2016 Zero FXS. It’s a bike we loved when we got a chance to test it in April of this year, so our answer was a hearty “Hell yes.”

Choosing an electric motorcycle is more akin to shopping for a computer than a traditional internal combustion one – saddle height versus screen size, ride range instead of RAM – and the price chart for the 2016 Zero line-up is just as dizzying. But here’s a quick primer on the line.

“Mastering the art of science and electric propulsion since 2006," Zero Motorcycles delivers its 10th model year line-up with many returning models, a few lower-priced ones and a slew of brand-new ones, including a whole new motor.

Designed for each of three disciplines, Zero offers a street (S), a dual-sport (DS), and off-road (FX) model, now boasting six individual models (up 2 from MY2015), each with two or three optional fuel cell ranges for a total of 14 separate machines.

The S and DS models add an “R” version to the family, for “racey” while the FX’s upgrade model gets an “S” for “super (motard)."

Newest to the stable are the 2016 FXS and 2016 DSR models, a “sportier dirt-bike” and a “faster dual-sport." Every returning model has a greater claimed range, and, in some cases, more horsepower and torque – if not a lower price as well.

Replacing age-old internal combustion engine technology with a maintenance-free brushless motor, Zero has developed their Z-Force power packs (ZF-x) to be lighter and more powerful than modern sport bikes, with 100-percent torque delivery from a standstill. Each passively air-cooled lithium-ion cell on the FXS is hot-swappable and efficient, fully-recyclable, and "refillable" at any nearby wall socket.

A Z-Force 13 motor with the Power Tank accessory has an estimated life-expectancy (to 80 percent, at city rate of use) of more than 400,000 miles, according to Zero – perhaps rivaling some people's riding lifetime.

Tanks For All The Fish

Look at the pricing charts and you’ll find MSRPs in a grid, presenting the model, the power cell size and two optional upgrades called “tanks.”

The Power Tank is nothing more than a larger cell. Available for every 2014+ model year S, SR, DS and DSR units, the $2,674 Power Tank adds 2.8 kWh to your unit’s capacity and range. Occupying the space previously utilized by the integrated tank bag, it is a dealer-installed option and comes with redesigned bodywork panels. So upgrading after your purchase might prove more difficult and costly.

The Charge Tank (MSRP $1,988) is a quick-charge module that triples the speed at which a battery can be topped off using publicly available Level 2 J1772 charge stations. It can charge a 9.8 kWh tank to 95 percent in about two hours, and a 13 kWh tank in about three. It’s available for 2015+ model year S, SR, DS and DSR models.

The Charge Tank (speed charger) and Power Tank prices are standard across the entire line-up.

It’s a heavy decision on when it comes to accessories, however. Since both the Charge Tank and Power Tank accessories occupy the same space, they cannot both be added to your final unit. Either you choose faster charging speed, or greater range.

For the commuting rider, the need for a quick charge lessens – go for distance instead. Get the Power Tank and you'll be able to charge less often; maybe once a week, depending on your distance to the office. With a claimed city range of nearly 200 miles, or a combined city/highway total of roughly 130, you’d not only be able to get away from any approaching zombies lickety split (0-60 in 3.3 seconds), you might be able to make it to the county line before you had to stop for a recharge.

Meanwhile the Zero smartphone app (iOS and Android), allows riders to choose certain settings. The app also provides real-time stats, post-ride data, and a Bluetooth connection. Maximizing the torque outlet with a tap of our finger, we were able to dial in the best track day performance, then return to a more efficient delivery for the ride home.

We all know the adage, it's more fun to ride a small bike fast (or to its limit) than a big bike slow. During our ride of the FXS, and before the sun warmed the tarmac of the Adams Motorsports Park in Riverside, California, to the point at which we could fry an egg, a handful of select journalists squeezed in a few dozen laps aboard the motard-minded mount. The appropriately-scaled kart track made the perfect launching pad for this sustainable commuter mount with attitude.

Bringing the keenest electric dirt-oriented machine back to the street, Zero now offers the racey FXS with longer range, more power, and the same price tag as the “lesser” FX model. Swing a leg over the 32.9-inch saddle and turn the key, and... silence.

But unlike any other motorcycle, this one is ready to release up to 44 horsepower at the twist of the wrist. No need to pull in the clutch lever, no need to click it into gear, just key it on, watch the LCD screen come alive and go!

The dash, along with associated smartphone app, is loaded with information on your ride including state of charge, power output and riding mode (Sport, Eco or Custom). We, of course, dialed up the custom mode and took every bit of torque the ZF6.5 would offer.

The experience is much like throttling on a scooter, without all the fireworks. Silently and stealthily, we rolled from the hot pit onto the track, and let the electrons rocket us into the first corner. Boasting a top speed of more than 80 mph, we nearly reached that in a matter of a few feet.

Zero to sixty on the ZF6.5 is just 3.8 seconds. Seventy foot-pounds of torque will do that do a machine weighing only (a forever dry) 293 lbs. Kick a leg out, tickle the Bosch binders with a single finger, throw the machine down until you scrape a peg and throttle out again – butter smooth!

Propped up on Showa shocks front and rear (with adjustable spring preload, compression and rebound damping) and the dirt segment of the motard course open, we got a taste of the FXS's capable dirt chops between a few of the paved corners, too. Chopping the suspension travel of the Showa 41mm inverted forks down 1.6 inches from the FX trim (to 7 inches even), the FXS rolls on a pair of 17-inch wheels front and rear (wrapped with Pirelli Diablo Rosso II), which also the tightens the rake, lessens the trail and slightly shortens the wheelbase, shaving ounces along the way. All told, the FXS can claim a 5mph increase in sustained top speed (to 75 mph) over the nearly 2-inch taller FX model.

The FXS was always there and never bottomed out, even without a finer tuning for my own weight. Although I wouldn't sell my BMW GS quite yet, the FXS would be perfect for local trails – think OHV instead of BDR.

Admittedly, riding an organized track day might be a little tricky unless you’ve got an extra battery or two, or access to the larger-amperage power sources on location. But the onboard household plug is handy, and will recharge the larger ZF6.5 in just under 9 hours. During our A-B session track schedule – the fast guys and the other ones – we were seeing an average of three 15- to 20-minute sessions per battery, although we were swapping them out early so there weren’t any “dry" bikes on track.

Our ride was designed to display the durability and pace at which the new units can run; an inner city ride would surely give greater range. We, of course, prefer to go fast, back into a few corners, and rub a few bar ends.

Now boasting 25 percent more power than the DS and 56 percent more torque (106 lb.-ft.), the new DSR sports the all-new Z-Force IPM motor, in the more powerful 75-7R configuration. Thanks to the more efficiently-cooled design of the internal permanent magnet (IPM) motor, 5 to 10 mph faster sustained top speeds are possible, as well as quicker 0-to-60 speeds.

Compared to the returning-but-updated dual-sport (DS) model, the new DSR gets the same suspension travel and set up, same wheels, tires, and brakes. The wheelbase is the same as well as the associated geometry. So, what makes it a new model? The little R in both the model name and the motor’s designation.

The passively air-cooled Z-Force 75-7R contains a new internal magnet and has greater thermal capabilities, one of those being the ability to run longer and faster. A internal permanent magnet that helps to produce more of what you want.

The new IPM motor is also seen on the updated SR, creating 67 hp and 106 pound-feet of torque, more than the non-R found on the standard dual-sport DS.

The new DSR only ships with larger 13 kWh cell and retails for $15,995, or $18,669 if you want the larger 15.9 kWh Power Tank (their highest priced model to date). Think of it as the “Adventure” model, at nearly the same price of the BMW, with almost zero maintenance costs or effort.

The future is swiftly, and quietly, approaching. And that idea of terminating your credit card account with the petrochemical pump stations is quickly becoming a real possibility. Zero Motorcycles suggests “the thrill of electric is more accessible than ever.”

And we couldn't agree more.