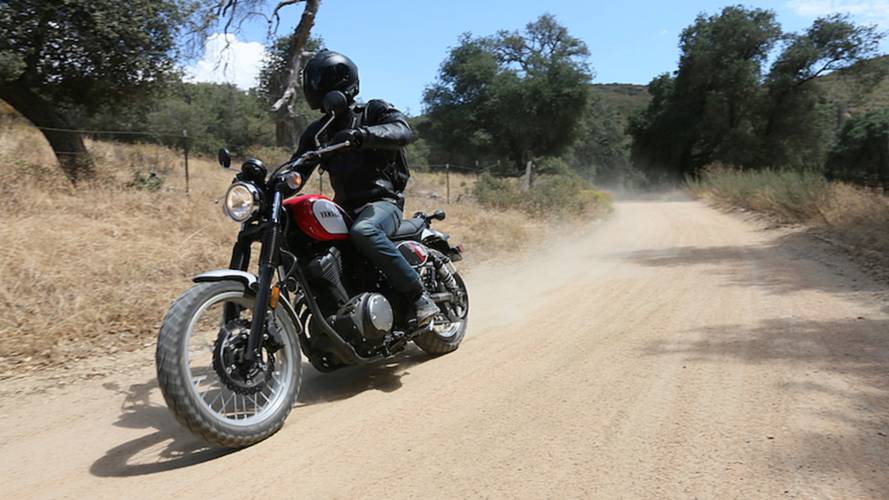 2017 Yamaha SCR950 – First RideYamaha has been on fire recently, with multiple new models released just in the last few months. They've given us the...

Yamaha has been on fire recently, with multiple new models released just in the last few months. They've given us the XSR900, FZ-10, a revised FJR (alright, it's not new but the changes were necessary and a long time coming), and now, a variation of the Bolt.

When Yamaha introduced the Bolt for the 2014 model year, they designed it to be a platform from which several other models could be created. Sales of the Bolt have been excellent, and Yamaha has since released the C-Spec (cafe racer inspired) and the R-Spec (up spec'd with remote-reservoir rear shocks and special paint).

This year we get another variant of the Bolt called the SCR950 - but I suspect that Yamaha might bring themselves some grief with that name. SCR obviously stands for Scrambler, and that's not an apt description of this motorcycle. I can already see comments complaining that it lacks a high exhaust pipe, that the 547-pound wet weight is too much, or that there's not enough ground clearance or suspension travel. I guess that's fair, because this isn't a scrambler, it's a Bolt that's "scrambler-inspired." Problem is, if I sell you a brick of gold and you later find out it's actually pyrite, I don't think you'll be pleased if my explanation is that it was "gold-inspired."

Despite all that, I think you should ignore the name because the SCR950 is the best offering in the Bolt model line - I just wish they called it something like the Bolt X-Spec.

The SCR950 is Yamaha's newest entry into their "Sport Heritage" model line, and I find it to be very attractive (more so in Rapid Red than the alternative Charcoal Silver).

Throw your leg over and it's immediately evident that this started as a cruiser, because your feet are spread wide. But thanks to a 5.5-inch increase in seat height from the Bolt (now up to 32.7 inches) and the wide off-road style handlebars, the riding position is upright and comfortable.

Bonus points go to the SCR for being narrow where the gas tank meets the seat, making it impressively easy to transition to a standing position when necessary. Note that riders with long legs may be annoyed with the air cleaner sticking out of the right side of the engine. Riding while standing was much more comfortable than I would have expected and it's a real plus because you don't want to be sitting on this bike when you hit big bumps - more on that later.

Yamaha correctly thought that the best way to give us a taste of this bike was to cover some pavement with a little bit of dirt thrown in for good measure, so they gave us a route of approximately 120 miles spanning both surfaces near Julian, California. It's what I'd do if I took off for a weekend trip with this kind of bike, and hopefully you're wired the same way.

The engine is the same 942cc 8-valve air-cooled V-Twin that you get in the Bolt/C-Spec/R-Spec, and it's well-suited for the SCR. The torque curve feels broad (though it's hard to give you exact numbers of the ideal rev range as there's no tachometer) and power delivery is linear, which makes it not just easy to break the rear tire loose, but (more importantly) easy to keep slides under control for fun in the dirt, critical when you're trying to be prudent on a motorcycle that isn't yours!

I wasn't able to verify it during our short ride, but Yamaha claims a healthy 51 miles per gallon for the SCR950. This yields a theoretical range of just over 170 miles thanks to the 3.4 gallon flangeless fuel tank.

All throughout the the ride that Yamaha had planned out for us, I looked for things to nitpick about the engine, wet multiplate clutch, and 5-speed transmission. After about 120 miles I had nothing to complain about (which as my friends will tell you, is a rare occurrence).

While I can't complain about the SCR's powertrain, I do have a few things to whine about here. The big issue on pavement is lean angle. The peg feelers and the road are like a pair of honeymooners - they'll be getting intimate early and often. The ground clearance is slightly increased from the Bolt thanks to a 17-inch rear wheel (1-inch increase) but it's not enough.

The issue on dirt is the 2.8 inches of travel in the rear suspension, which is simply inadequate. At speed, even moderate bumps resulted in a violent metallic sound from the rear, a shiver up my spine, and a variety of curse words out of my mouth. It's not just off-road, either - rider beware of potholes in your average poorly-maintained city street. Thankfully, and as I mentioned before, it is surprisingly easy and comfortable to stand on this bike so you can minimize the trauma.

Looking a bit lower on the SCR, I was satisfied with the 298mm wave rotor brakes. Initial bite was good, and while they would have better feedback in a perfect world, I don't consider this to be a big issue. I was also satisfied with the OEM tires, which are Bridgestone Trail Wings (19-inch front, 17-inch rear). They are well suited for the approximately 95 percent pavement, 5 percent dirt riding that Yamaha expects these bikes to go through. If I had to nitpick, the Trail Wings are loud: in 5th gear at 65 miles per hour, the tire noise was more audible than the exhaust. Howling on pavement is expected with dual-sport tires but these are definitely some of the noisiest examples I've encountered.

Thanks to the taller seat height and the off-road style handlebars, the SCR950 is much more comfortable than its Bolt brethren. The riding position is good, but the seat is too thin and I would get uncomfortable after just 10 miles in the saddle. It's easy to shift around on the saddle to mix things up but this seat just needs a little more padding.

The SCR950 is pretty lacking in the 'features' department, though I would argue that's sort of the point with this bike. ABS, traction control, riding modes... these are all things that you won't see on the SCR. Think of it as adding authenticity to the 'heritage' part of the Sport Heritage nomenclature.

The instrumentation is basic but effective. The LCD gauge is legible in almost any lighting situation, and it lets you keep track of your speed, total mileage, and offers a couple of trip meters. The button to switch between display modes is on the right control, so you can only use it with your hand off the throttle.

Yamaha offers approximately 30 accessories specifically for the SCR950, many of which are small cosmetic pieces. If this bike was in my garage, I'd spend the money on the Adventure Saddlebags and Aluminum Skid Plate.

The build quality seems up to Yamaha's usual fare. The SCR benefits from sharing several parts with a bike that has been in production for a few years and has gone through any teething problems already. Yamaha made it a point to stress that they used "authentic materials" with the steel handlebar, fenders and subframe. It's all put together well but once you're up to speed the mirrors shake to the point that they're borderline useless.

I think the retro, "scrambler-inspired" styling looks fantastic. I dig the LCD speedometer, sidecovers styled like number plates, LED taillight, and the paint scheme. I don't care much for the shape and the finish of the exhaust but again, overall it's a good looking motorcycle.

Looking toward the future, Yamaha expects the SCR to be a base for customization. To that end, there may be plans for the SCR950 to be featured in Yamaha's Yard Built program, and I'm looking forward to seeing what riders make happen with this platform.

Think back to the first time you took a street bike on a fire road. Did you feel like a badass? Or were you just glad you didn't hurt yourself? Either way, I think the SCR950 does a good job making that experience more accessible. If you're really looking for what most riders consider a scrambler, I think the ground clearance and suspension travel will leave you wanting, despite the "SCR" name. But if you're realistic needs are for something you can commute with during the week, and then explore well-maintained dirt roads on the weekend, then this bike deserves a test ride. The riding position is just about perfect and the OEM tires will ensure that you have a great time filling up your Instagram profile with moto-camping photos from local national parks.

To sum things up, I think the SCR is pretty, nimble, and very easy to ride. The price is right, too - the SCR950 is already available at your local Yamaha dealer for $8,699. Just don't be surprised if you hear me call it the Bolt X-Spec!