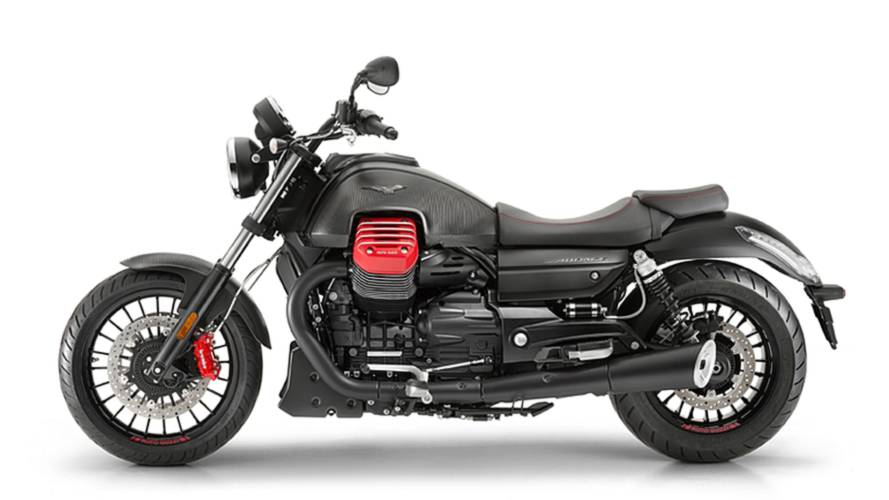 The Audace Carbon is the Moto Guzzi with the strongest and most rebellious character. It is a muscle-bike designed to emphasize the performance of the "made in Mandello" 1400 cc big block. No other Moto Guzzi expresses that dark soul already introduced on the V7 II Stone and reconfirmed by the majestic MGX-21. Nothing more than absolute riding pleasure guided the development of a model based on the essentiality of the shapes where the best technology is at the service of fun.

Ostentatious, muscular and fierce, the Audace Carbon can be picked out immediately by its front end, made stylistically lighter by the circular headlight unit and the real carbon elements such as the front mudguard mounted on a fork without any telescope covering. The Audace Carbon has no chromium plating. Every mechanical detail, painted dark as night, is contrasted by the matt red chosen for the milled aluminium engine head covers, which in turn match the red of the Brembo front brakes. A model of striking beauty, to be enjoyed one-up in search of fun around corners or relaxation on more wide open roads.

“The Audace Carbon looks as if it is crouched down on its haunches like a large feline ready to unleash its explosive power to scratch the asphalt, leaving the mark of its oversize 200/60 rear tire. The generosity of the 1400 cc 90° V-twin is a quality which is well known by now and on the Audace Carbon, thanks to the exhaust system with painstakingly designed fluid dynamics, is even more spirited at high revs, up to a torque of 121 Nm at 3,000 rpm. As a result, thanks in part to an advantageous weight/power ratio, the Audace Carbon jumps off the line with unexpected vigor.”