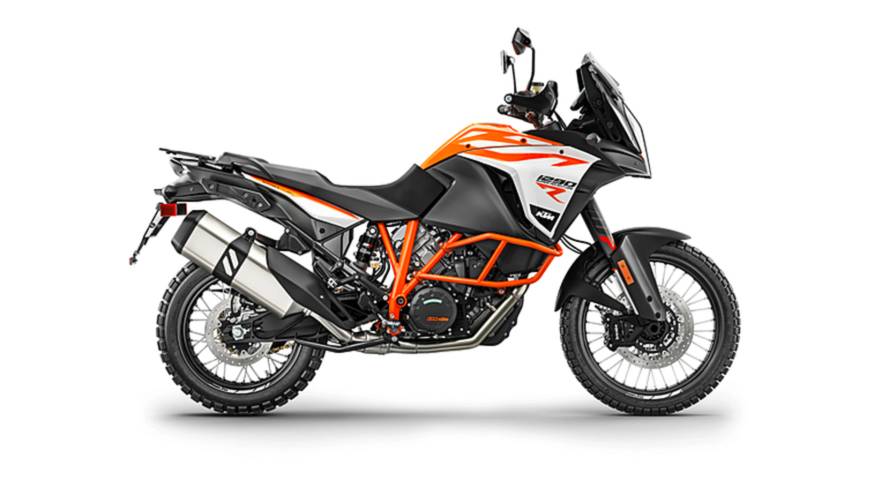 KTM has really stepped up its ADV bike production over the past decade and for 2017 it has raised the bar with the release of the 1290 Super Adventure R. This is the exact opposite of the 390 Adventure we were all hoping to see, but this bike more than makes up for that fleeting thought. What we get instead is a full blown big, bad Adventure bike with enough electronic gadgets, horespower and optional equipment than you probably ever wanted and likely will ever need. There's so much going on here, it's difficult to pick a place to start!

For now let’s look at this juggernaut adventure touring motorcycle from the inside out. As usual, KTM has wrapped its trademark V-Twin in a chrome-moly trellis frame. This 1301cc engine cranks out a claimed 160 horsepower, 130lb-ft of torque (Previously found in the Super Duke R) and is equipped with the latest WP suspension components created specifically for this big ADV machine. The fully adjustable WP USD fork features separate compression and rebound while the adjustable WP PDS (Progressive Damping System) equipped rear shock is re-designed to resist bottoming in those final inches of the stroke in an effort to improve the 1290 R’s ability off road.

All of the current KTM Adventure series bikes are dressed in the latest iteration of its angular bodywork and a unique new lightweight LED headlamp and directional LEDs that shed light in the direction your turning. The base electronics package is high tech, and it all starts at the dash which looks like an iPad-mini with its 6.5-inch Thin Film Transistor (TFT) display capable of providing all the basic gauge functions and a cornucopia of ride assist systems. It has Motorcycle Stability Control (MSC), multi-mode ABS including an off-road mode, plus four mode Traction Control (MTC) and a Tire Pressure Monitor (TPS).

Offroad ABS mode allows for dirt-specific ABS application on the front wheel while disengaging the rear ABS for brake slides and total control in the dirt.

It comes with cruise control too. But there’s even more gizmos and optional equipment available. KTM offers a Travel Pack which adds Hill Hold Control (HHR), Motor Slip Regulation (MSR) and a Quick shifter that works with the stock slipper clutch to provide clutch free up- and-down shifts. The Travel Pack will also include display and Bluetooth control through the TFT dash so you can control your phone and music. If you are planning to carry a phone you’ll be glad to know this bike has a waterproof compartment with USB port so you’ll always have a full charge.

The list goes on, but basically you have a 540-lb. bike when it has a full 6.1 gallons of fuel that is capable going through almost any type of terrain this side of an endure course (And I’m sure it can handle a few of those if necessary). It rolls on dirt friendly 21-inch front and 18-inch tubeless, spoke rear wheels with Continental TKC 8 rubber. As always, the Adventure models are made to go anywhere you dare to go.

Did we need the big, bad 1290 Adventure R? Hell yeah. Why not? Their rivals from Bavaria have been making a killing with these big ADV bikes for a long time. Now, KTM is taking the concept of creating bikes with every conceivable system possible to make the riding experience even better and offering them in a flagship motorcycle.